Q: What are throttling valves and how are they used to control flow rates?

A: Throttling valves are a type of valve that can be used to start, stop and regulate the flow of fluid through a rotodynamic pump. When the flow of a pump is regulated using a throttling valve, the system curve is changed. The operating point moves to the left on the Pump curve when the flow is decreased.

Throttling valves are one way of controlling flow rates, by throttling flow directly or in a bypass line. Variable speed operation is an alternative method of controlling the flow of a system.

With the throttling valve control method, the pump runs continuously, and a valve in the pump discharge line is opened or closed to adjust the flow to the required value. To understand how the throttling controls flow rate, see Figure 4.11. With the valve fully open, the pump operates at Flow 2. When the valve is in the partially open position, it introduces an additional friction loss in the system, resulting in a new system curve that intersects the Pump curve at Flow 1, which is the new operating point. 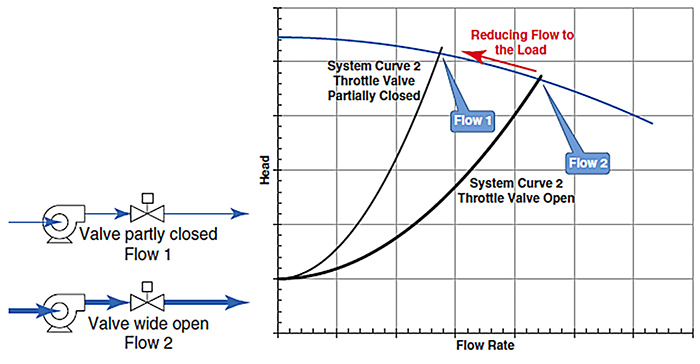 The head difference between the two curves’ operating points shown is the head (pressure) drop across the throttling valve.

It is usual practice with throttling control to have the valve partially shut even at maximum system design flow to achieve controllability. Therefore, energy is wasted overcoming the resistance through the valve at all flow conditions.

Radial flow (centrifugal pumps) have a reduction in pump power as flow rate is decreased, however the flow multiplied by the head drop across the valve is wasted energy that could be recovered if speed control was used as an alternative. On the other hand, using throttling control with mixed or axial flow pumps, where the pump power curve is normally increasing with deceased flow, could lead to unacceptable increases in power consumption, which results in overloading the driver in addition to wasted energy.

When evaluating the life cycle cost, in addition to energy costs, maintenance cost of control valves need to be considered, particularly in oversized situations where excessive throttling is ongoing and results in cavitation across the valve. The result is that the life cycle costs of this widely used control method can be surprisingly high.

For more information on controlling the flow rate in pumps, refer to the Hydraulic Institute’s Application Guideline for Variable Speed Pumping at www.pumps.org.

Q: We have experienced corrosion issues with our pumps. Are there different types of corrosion I should evaluate, and how does the corrosive nature of a process fluid impact pump selection?

A: Corrosion is the destructive attack of a material by chemical or electrochemical reaction with its environment. Chemical and electrochemical corrosion can be further divided into several subtypes of corrosion, which all pump users should be aware of in order to select proper construction materials and ensure the longevity of pump components. The following list provides general information about the different types of corrosion.

For more information on how corrosion affects pumping systems, refer to Reliability of Pumping Equipment: Guidelines for Maximizing Uptime, Availability, and Reliability. To see corrosion allowances for different pump components, refer to ANSI/HI 1.3 Rotodynamic Centrifugal Pumps for Design and Application.