Remote monitoring software as part of a complete preventive maintenance plan can provide the insight and data required to troubleshoot pump system problems and prevent total equipment failure. For many facilities, these tools have been instrumental in minimizing downtime and costly repairs while providing information necessary for preventing future issues.

Wiped Bearing on a Feedwater Pump

On July 14, a remote monitoring software solution detected changes in the mechanical profile of the outboard bearing of a feedwater pump at a combined-cycle power plant.

Vibration on the outboard bearing increased to 7.55 millimeters per second (mm/s) from an expected value of 3.98 mm/s. At the same time, the temperature in this outboard bearing jumped to an actual value of 270 degrees F (132 C) before quickly dropping to values around 170 F (77 C). The temperature for this bearing was expected to remain around 190 F (88 C). The software provider sent a high-priority notification to the facility and started closely monitoring this issue. 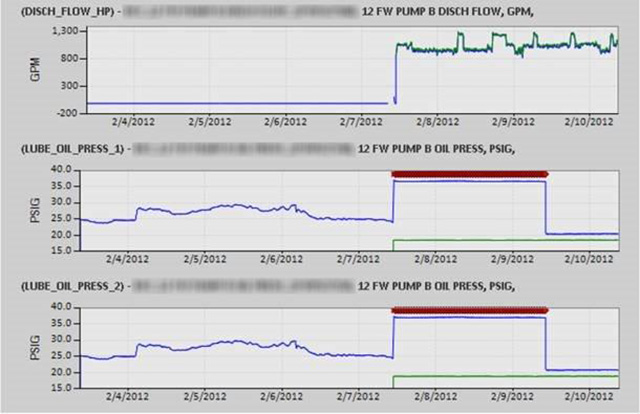 MM-wiped-bearing-screenshot caption: Screenshot depicting actual values (blue) and expected values (green) for a feedwater pump. Changes in vibration levels shown in graphs 2 and 3, and changes in bearing temperature shown in the bottom graph.

Upon the initial notification, the end user quickly confirmed that the mechanical system on this feedwater pump was failing. When the pump was finally taken offline, the user confirmed that the pump "was smoking."Inspection of the pump revealed that the bearing Babbitt had been wiped. When the replacement pump was brought online, it experienced high-thrust bearing temperatures so the plant shut down and trimmed the balance drum position. This caused the thrust bearing temperature to return to normal but caused the motor outboard bearing vibration to increase and an abnormal sound to emanate from the bearing.

The user and software provider collaborated on a review of the high-speed bearing data and diagnosed a coupling alignment issue that resulted from the trimming of the balance drum on the replacement pump that had just been installed. The new pump was taken offline and an axial misalignment of approximately 0.05 inches (1.27 mm) resulting from the trimming of the balance drum was discovered and corrected. Once the new spare pump was returned to service, the plant was able to verify motor outboard bearing vibrations and noise abated.

MM-wiped-bearing-screenshot caption: Screenshot depicting actual values (blue) and expected values (green) for a feedwater pump. Changes in vibration levels shown in graphs 2 and 3, and changes in bearing temperature shown in the bottom graph.

In this particular case, running this feedwater pump to failure was more economical than taking an outage and repairing the pump. The early identification of the issue allowed the user to have a spare pump staged and ready to install. This allowed the facility to minimize the outage and lost production costs. In addition, collaboration between the user and the software provider helped identify a coupling alignment issue on a newly installed spare pump and prevented damage to the pump and the lost production that would have resulted if the plant had lost the spare feedwater pump.

The software notified the user that the continued tandem operation of both the shaft-driven and auxiliary lube oil pumps was over-pressurizing the lube oil system. This could have caused damage to the boiler-feed pump seals, bearings and the pump itself, and it could have resulted in a trip of the boiler water feed pump. After discussion on the weekly call, the plant immediately shut down the auxiliary lube oil pump, and the lube oil pressures returned to expected values.