A Review of 2019 Mergers & Acquisitions Activity

Key factors that have sustained strong activity and valuations over the last several years are expected to continue.
by Thomas E. Haan
01/20/2020 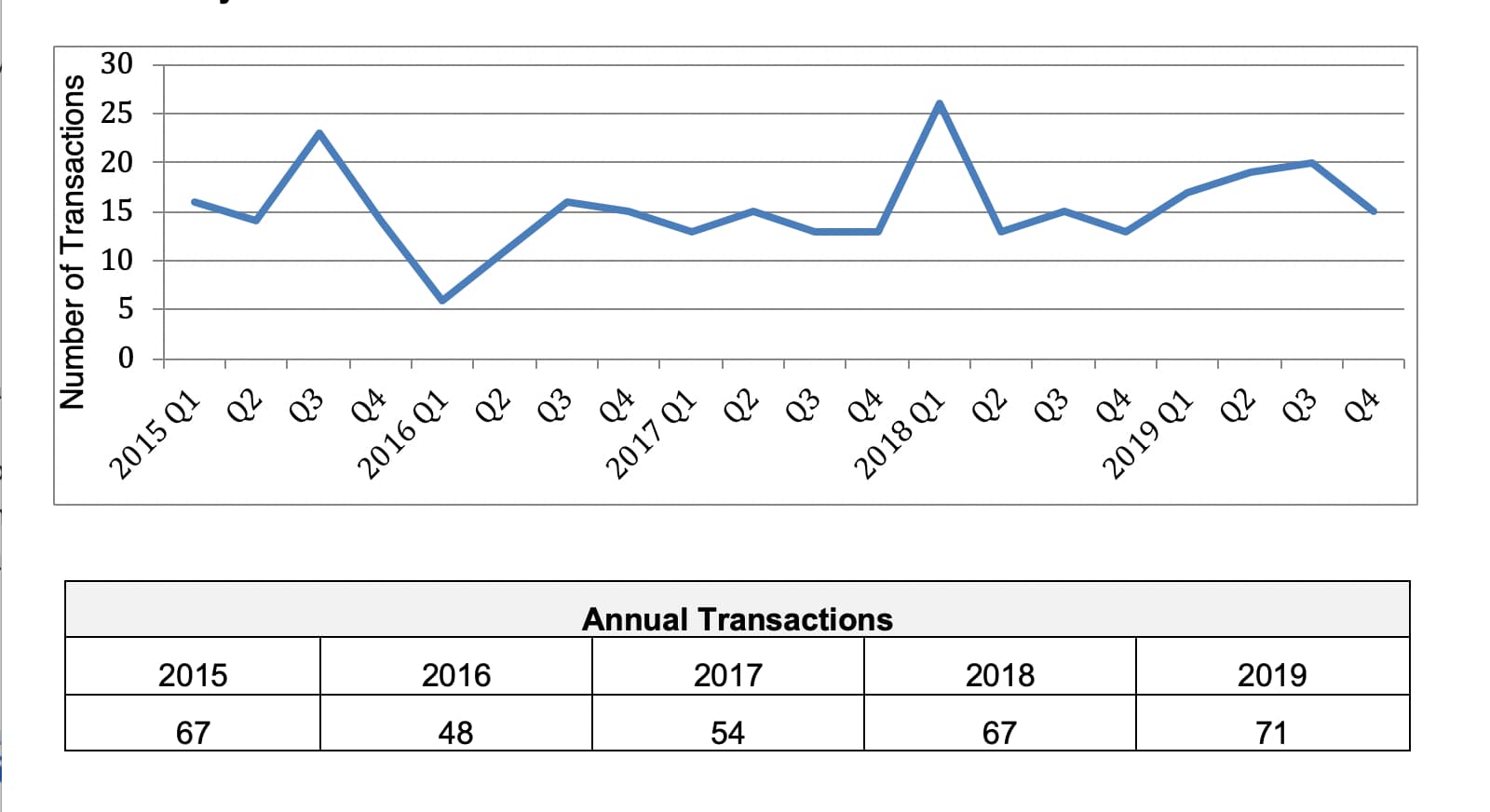 The deal activity in the fourth quarter (Q4) was average following three quarters of above average activity, making 2020 the strongest year for fluid handling industry mergers and acquisitions (M&A) activity in the last five years.

Some of the activity, such as strategic realignments, was at least partially driven by companies taking advantage of the strong valuations to divest noncore assets or create additional focus by spinning off strong businesses that can stand alone. In addition, private business owners decided to sell now rather than risk having to ride out another full business cycle.

On the other hand, some of the activity was happening despite the strong valuation environment. Private equity firms have more cash while strategic buyers are looking for growth opportunities in the form of capabilities expansion, geographic expansion, channel integration and acquiring new technologies.

These factors, plus the availability of low-cost debt, seem to be overcoming macrofactors such as economic and geopolitical uncertainty and created a strong year for M&A activity in the fluid handling industry.

Demand remains strong for quality acquisitions with a continuation of favorable M&A conditions, although there seemed to be more economic uncertainty as we progressed through the year.

Kaman Corporation sold their industrial distribution business to Littlejohn & Co. for $700 million to take advantage of the current favorable market conditions and to focus on their aerospace business.

Ingersoll-Rand entered an agreement to acquire Precision Flow Systems from BC Partners Advisors and the Carlyle Group in a transaction valued at $1.45 billion, and then sold their industrial division, including the pending PFS transaction, to Gardner Denver in a transaction valued at $7.7 billion, creating an increased focus as a pure play climate solutions company while Gardner Denver becomes a $6.6 billion (pro forma) revenue flow creation and industrial business.

Weir Group is selling their flow control business, which serves the power and downstream oil and gas markets, to private equity firm First Reserve for $358 million. This enables Weir to increase its focus on the aftermarket dominated end-use markets of mining and upstream oil and gas production.

Colfax Corporation announced they are selling their Air and Gas Handling business to KPS Capital Partners. This transaction follows the sale of the Colfax Fluid Handling business in 2018 and the acquisition of DJO Global (medical technology) in the first quarter of 2019. According to the company, this completes their strategic realignment to diversify their end-market exposure, reduce cyclicality and increase profitability. It will also enable Colfax to pursue bolt-on acquisitions in their medical technology and fabrication technology segments.

SPX Flow has entered into a definitive agreement to sell a substantial portion of its former power and energy reportable segment (“the P&E business”) to an affiliate of funds managed by Apollo Global Management, Inc. Under the terms of the purchase agreement, the Apollo fund affiliate will purchase the P&E business in an all-cash transaction with an enterprise value of $475 million.

In 2019, water was once again the predominate industry served by target companies that have a specific industry focus.

There does not appear to be any major changes on the horizon for the key factors that have sustained strong activity and valuations over the last several years:

Particularly with private equity firms having acquired significant platforms in 2019—SPX Flow power and energy, Weir/Flow Control, Colfax/Gas and Air Handling, Kaman industrial distribution, Ohio Transmission Corp. (OTC), and in January 2020 the acquisition of Sundyne by Apollo Management—it can be expected that these firms, among others, will be aggressively seeking add-on businesses for these platforms in 2020 and beyond.

Thomas E. Haan is the principal of Global Equity Consulting LLC, providing business development services to midsize manufacturing, distribution and service companies in the fluid handling industry. He is also an operating director for City Capital Advisors, an M&A advisory firm based in Chicago. Haan has more than 40 years of experience, primarily in senior management roles for manufacturing companies serving the process industries. His global experience includes involvement with mergers, acquisitions, joint ventures and their integration. He has lead negotiations as well as the integration of joint ventures and acquisitions in Saudi Arabia and South Korea, Australia and New Zealand. Haan has extensive experience in P&L management, strategic planning and global business development. He is the former president of EagleBurgmann Industries, LP, and the Fluid Sealing Division of Flowserve Corporation. His experience also includes positions as a board member, senior vice president of international operations and director of sales. He has served as an appointee of the U.S. Secretary of Commerce on the Michigan District Export Council, past president of the Fluid Sealing Association, as well as chairman of the Associate Member Council and a member of the Board of Directors of the Hydraulic Institute. Haan is a graduate of the School of Business of Western Michigan University.

Pump Industry Insider
Understanding Your Supply Chain Can Mitigate Risk
COVID-19 exemplifies importance of mapping suppliers for each and every component.
Pump Industry Insider
The Political Plays Behind the Oil Price War
As Saudi Arabia and Russia battle for increased market share, which country is their primary target to dethrone?
Pump Industry Insider
Water Reuse Moves Into the Limelight
WEF President on why this needs to be part of every water resource plan.
Pump Industry Insider
Oil & Gas, Other Industries Brace for Coronavirus Impact
Pumps industry consultants and experts weigh in on the fallout from the worldwide spread of COVID-19.
Pump Industry Insider
Research Study Expects Adoption of Safety Sensors and Switches to Grow
Industry 4.0 poised to revolutionize the global safety sensors and switches market.