While often taken for granted, the composition and design of the mating faces in every mechanical seal are critical in terms of the prime objective—to reliably prevent the media on one side of the face from successfully reaching the other. To achieve this objective, different materials are employed—including mechanical carbon-graphite with resin or antimony impregnation, metals and hard coatings, aluminum oxide, tungsten carbide, and silicon carbide. The latter three ceramics are most often characterized as hard-face materials, with silicon carbide currently one of the more frequently applied.

To minimize the potential for leakage paths across the faces, flatness is often controlled to fewer than three helium light bands (0.000033-inch). The closing force, typically created by mechanical methods such as springs, plus the hydraulic forces that exist within the seal itself, hold the faces together, creating an intimate condition ultimately resulting in the wear of one or both faces.

As operating conditions for the seal become more severe, hard-face materials must continue to efficiently rub against each other to maximize their inherent benefits. Unlike mechanical carbon-graphite, these hard-face materials are not self-lubricating and so are unable to function for extended periods of time without fluid lubrication. Other enhancements need to be provided to extend the capability of the hard-face mating pair.

The seal face topography that best reduces the propensity for leakage—a flat, smooth surface—represents one of the most tribologically difficult conditions for a conventional homogeneous hard-face combination. Different methods are used to improve lubrication at the interface. Many are temporary and potentially contrary to that prime objective. They include “matte” lapping, which creates microns-wide scratches on the face to allow fluid into and across the interface. With time, this surface condition is worn away, creating a condition that is theoretically optimal for minimizing leakage but tribologically challenging for the non-lubricating, hard-face materials.

Various forms of crystalline diamond coating can also be applied to the faces to further increase hardness and reduce friction. These enhancements offer benefits for applications in which harsh operating conditions prevail.

The presence of the graphite creates small reservoirs on the surface that provide a controlled texture for lubrication without creating leak paths. This texture increases the hard face combination’s ability to operate under more rigorous pressure and velocity (PV) conditions. Unlike the “matte” lap approach, the benefit of the integrated graphite is that it is not just a surface effect, but one that extends throughout the material (see Figure 1). A slight reduction in the physical properties of the composite occurs as a result of the graphite addition.

More recent enhancements in the composite provide the ability to sustain the improved physical characteristics of the homogeneous silicon carbide in the bulk of the material while incorporating the benefits of the graphite addition only on the seal face itself (see Figure 2).

Integration of the two-phase composite texture onto a homogeneous substrate provides the physical attributes of the bulk silicon carbide and the tribological enhancement of the composite (patent pending). These composite silicon carbides enable customizing of the structure for the application, creating an ability to tailor the interface for demanding requirements. By adjusting the amount of graphite, the surface texture can be controlled closely, with an upper and lower limit, improving predictability in the mechanical seal (see Figure 3). 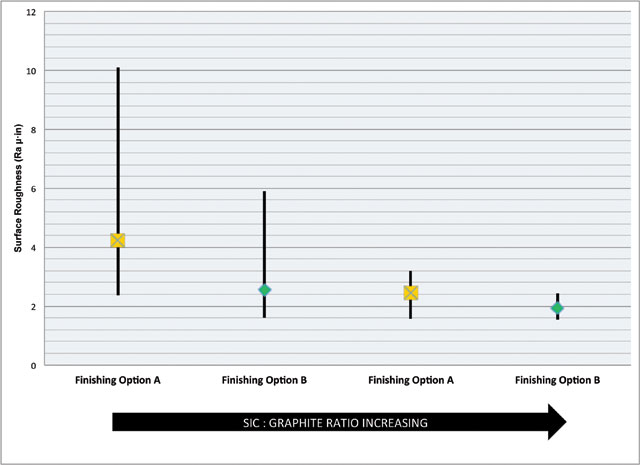 The ability to closely control the amount of surface texture on the seal face through formulation and processing provides enhanced capability for the mating pair that will exist throughout the life of the components. Additionally, this specific adjustment in the amount of graphite and volume of the texture enables further customization for the most demanding applications.

The mating rings for a mechanical seal are critical components. Silicon carbide remains one of the most popular and cost-effective hard-face materials. Ongoing research and product development continues to provide improvements in these materials to enhance their strengths and minimize their weaknesses. Graphite-loaded composites are recent examples. Their development has led to materials that provide the mechanical properties and chemical resistance of homogeneous silicon carbide with improved tribological characteristics. Consult a seal manufacturer for further information on these materials because many types are available, each with advantages and disadvantages.