Should You Upgrade a Pump Drive?

Recently, there has been plenty of talk about energy efficiency in the pumping industry. According to the Hydraulic Institute (HI), pumping systems account for 40 percent of industrial energy usage, and HI has established a new energy rating label system. The labeling applies to new pumps, and the vast majority of pumps have been in service for many years. If there is an issue in a facility, the maintenance team usually knows which pumps are underperforming. Without a good understanding of the overall system, it can be frustrating to pinpoint the issue. Today, we will focus less on the actual efficiency of the pump, but instead on the interactions with the motor, and whether adding some kind of variable speed control is worthwhile.

Recently, I ran into the following scenario where a single pump delivered the flow rates in Image 1. This is a typical 4x3-10 end suction pump operating at 3,560 revolutions per minute (rpm) and under 50 horsepower (hp) on the smaller to midsized range. The pump looked to be slightly oversized, but was performing decently. When looking at costs in this scenario, I will use the national average for commercial electric prices of 11 cents per kilowatt hour (kWh).

Notice in Image 1 that they are spending roughly $25,000 per year operating the midsized pump. It varied from 22.8 to 28.5 kW or in the 30- to 40-hp range­, not accounting for inefficiency in the motor. And, the efficiency of the pump is falling as the operating point keeps pushing back on the pump curve.

When we compare this to the variable speed pumping costs, we see savings of more than $5,000 in energy per year in Image 2. But, the bulk of the savings are not from the pump efficiency. To get the full picture, we look at the pump curve. 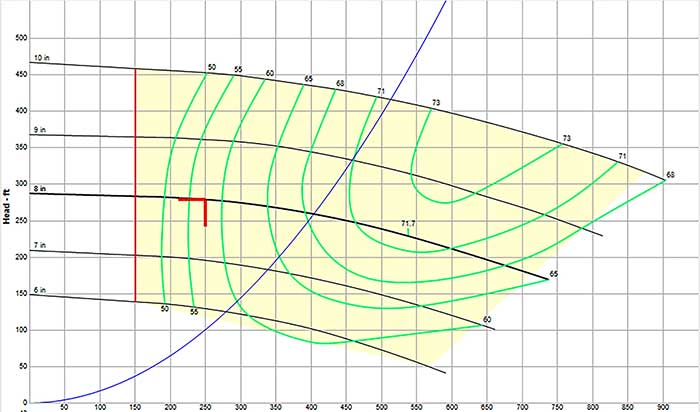 When looking at the pump curve in conjunction with the system curve a large disparity is shown. Image 3 shows the operation at the lowest flow rate of 250 gallons per minute (gpm). The system curve intersects the pump curve at 400 gpm, which indicates little throttling is necessary at the highest flow rate. Tracing the curve back to 250 gpm, we can see that the pump will put out 275 feet of head, while the system resistance is only 100 feet, resulting in a large amount of energy that must be dispersed. This is lost energy. The savings with the variable speed pump are realized because the pump can scale back its speed to achieve the desired flow rate, instead of needing to throttle the flow downstream with a control valve. If we look at the same operating condition except with a variable frequency drive (VFD) pump (Image 4), the pump’s operating speed would reduce to 2,220 rpm, which would achieve the 250 gpm flow rate desired. This flow rate is now achieved using just 10 hp when the original fixed speed pump was consuming more than 30 hp. 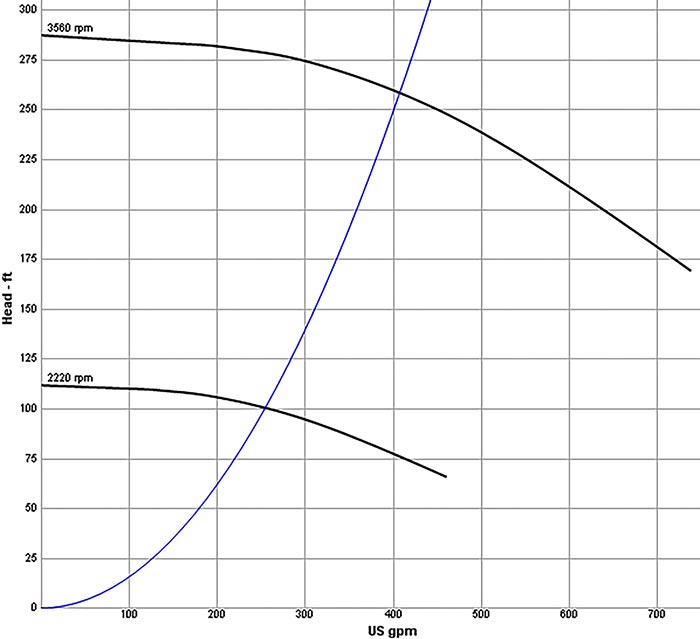 There may be room for additional savings. Notice in this system, the resistance curve starts essentially at zero and goes up with the flow rate. This indicates that the majority of the energy from the pump is used to overcome the frictional forces in the pipe and components as opposed to pumping up in elevation. This system was operational almost continually, so there is no room to slow the flow rate. Tank sizes and incoming flow rates also impact the necessary flow rate. If the system were in operation part time, then additional savings could be generated from operating at a lower flow rate and longer length of time. These incremental steps can have a large effect over time. As the flow rate drops below 200 gpm, the power drops under 5 hp, which is approaching a 90 percent power drop from 400 gpm.

Now is when the decision of whether or not to upgrade gets shifted onto the individual user and their circumstances. Depending on the age of the motor, it may not be able to accept a VFD controller, though there are always workarounds and new products. In some areas of the Northwest, energy rates are significantly below the national average. Meanwhile, the rate may be double or even triple in places like Alaska and Hawaii. The price of drives vary widely depending on the size and manufacturer, as well as what conditions it is rated for. One school of thought is to have fewer components in the system so there are fewer parts that can break.

In this scenario, we also saw the pump running closer to its best efficiency point (BEP), which should improve mean time between failure (MTBF). Finally, many of these upgrades can be subsidized by local utilities. Demonstrating the savings through software and before/after power readings can significantly cut the cost of upgrading depending on your local energy alliance.

Dominik Fry, P.E., is Engineered Software, Inc.’s business development engineer and has nearly a decade of experience in the energy industry while working on some of the nation’s largest energy projects. Fry earned a Bachelor of Science at Montana State University. For more information, visit www.eng-software.com.

Pumps
What Does Secondary Containment Mean?
For pumps, this term generally relates to sealless canned motor pump (CMP) or magnetic drive pump (MDP) types.
Pumps
U.S. Oil & Gas, Wasted Money & Strategies to Address Global Warming
Some European countries have made the switch from fossil fuels to renewable energy, but the U.S. is falling behind.
Pumps
Using Piston-Actuated Diaphragm Pumps in Mine Dewatering
How these pumps are able to operate at higher efficiencies and pressures.
Motors
5 Things to Look for in an Aerator Motor
Construction, contaminants and choosing the right bearings can all affect an aerator motor.
Pumps
Data Science as a Way to Extract Value From the Industrial Internet
Analytics can help organizations become more efficient.