For more than 50 years, air-operated, double-diaphragm (AODD) pumps have played a role in many companies’ modern global manufacturing and fluid-handling operations.

The original pump concept has changed little over time and works because of its simple operation and construction.

With a major focus on operating improvements and cost reductions from businesses, AODD pump manufacturers have introduced new air distribution systems (ADS) to increase pump efficiency and meet these demands. The new ADS technologies range from electronic controls to mechanical innovations. However, the resulting savings in compressed air usage and increase in pump efficiency vary for each system.

This article presents the results of head-to-head comparisons of AODD pumps with different ADSs and the final data acquired during those tests. The results help illustrate the impact that different ADS technologies have on air consumption, energy use and overall flow rate.

In AODD pump operations, energy use is directly related to the rate at which the pumps use air to drive each stroke during the pumping cycle. With increasingly high energy costs, facility operators understand that the initial purchase and installation of a new pumping system is only a small part of the total cost of ownership (TCO) and operation. The routine costs of energy and maintenance remain the primary cost drivers in the TCO. 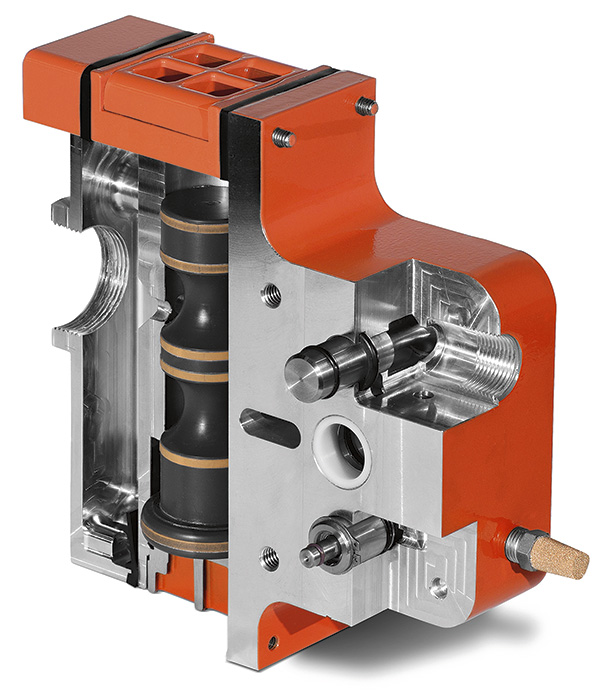 Much like cars, pumps can be rated according to efficiency. The goal is to use the least amount of air to pump the greatest amount of product. The ultimate objective is to reduce the rate of air consumption in relation to the product flow rate and minimize the amount of air that is not creating product yield (therefore, wasting energy) during the pumping cycle.

If attained, this combination can positively impact an operation’s bottom line. The profitability is determined by the volume of air being consumed and the energy required to compress it.

Although the technology is more than 50 years old, AODD pumps can still be made more efficient by recent ADS evolution. These developments better control the air flow and prevent wasteful air overfilling, which reduces air consumption and operating and maintenance costs.

Two primary methods control air flow and prevent overfilling by cutting off the air supply to the air chamber before the end of the pump cycle: electronically controlled and mechanically actuated ADSs.

The electronic control method has two shortcomings. First, the electronics raise an additional set of maintenance and operational concerns, including the prohibition of their use in explosive environments, such as mines, and an inability to be submerged.

Second, electronic ADS technology requires a “learning period” of 30 to 40 seconds during which it monitors the operation of the pump before it can estimate when to cut off the air supply prior to the end of the stroke. This can result in erratic and sometimes wasteful flow rates during the learning period.

During the time period from the end of each stroke to the completed shift of the valve, the air is allowed to “overfill” the air chamber without any corresponding displacement of fluid. This volume of compressed air is entirely wasted.

The mechanically actuated method is a simple and extremely effective way to control the air with each stroke and prevent wasteful overfilling.

The air is constantly mechanically controlled to maximize efficiency, minimize complexity and maintenance considerations, and allow for operation in explosive and submerged pumping environments.

To create real-world conditions to measure the effectiveness of different ADS technologies industry-wide, a controlled, objective head-to-head test was arranged comparing several AODD pumps that were fitted with traditional, electronically controlled and mechanically actuated ADSs. Common conditions of service that are seen in the field were replicated in the laboratory.

This simulated application required each pump to produce a flow of 320 liters per minute (lpm)—85 gallons per minute (gpm)—against a head pressure of 2.1 bar (30 psi).
To achieve a fair comparison between these competing pumps, each pump was run at the inlet air pressure needed to meet the common condition of service. Air-consumption data was then recorded (see Table 1 for the results for four pumps). 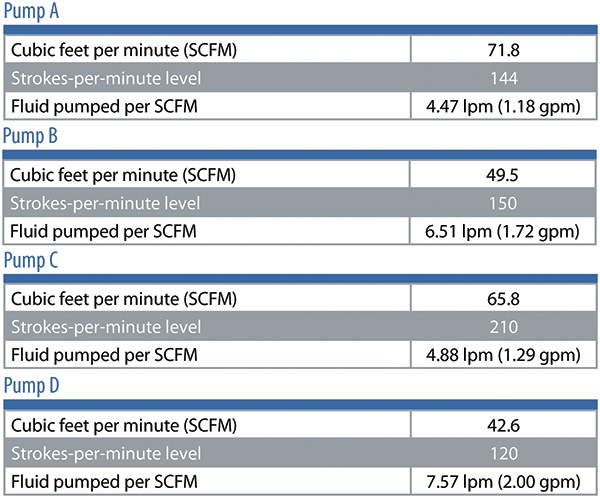 The data gathered in the objective AODD testing show that Pump D—which used the ADS that restricts air flow into the filling air chamber to minimize wasted compressed air—had better performance in all three points of measurement.

It had the lowest air consumption in standard cubic feet per minute (SCFM), the lowest strokes per minute and the highest volume of fluid pumped per SCFM.

Pump D averages an overall 30 percent reduction in air consumption compared with Pumps A, B and C.

It also provides the largest reduction in air consumption among the four pumps while still managing the best overall volume of fluid moved per stroke, requiring the fewest strokes per minute.

The air-restricting ADS in Pump D is a new way to look at how pneumatic pumps operate.

To combat overfilling, the ADS used in Pump D restricts the air flow into the filling air chamber at the end of the pump’s stroke, which minimizes the compressed air that is wasted. The air control spool of this ADS meters the air to prevent overfilling without reducing product yield.

The result is decreased air consumption with maximum operational efficiency and flow rates. Unlike the electronic ADS solution, Pump D’s ADS requires no electrical power source and has no delayed learning period after each startup. 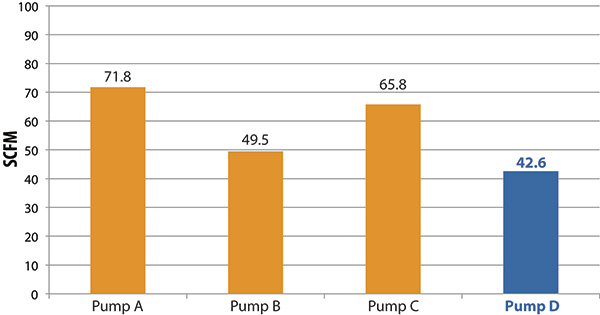 Although reliably used in applications for more than 50 years, AODD pumps can be enhanced to deliver greater efficiency and cost savings through improved ADS technology that prevents air overfilling.

This ADS addresses the overfilling waste of traditional AODD pumps, providing considerable savings by decreasing air consumption while maintaining the same fluid-volume output. This ADS’s lower strokes-per-minute rate compared with the other systems delivers maintenance advantages because of the minimized wear and tear during operation.

Carl Glauber is the Diaphragm Pump product manager for Wilden Pump & Engineering Co., LLC, Grand Terrace, California, a manufacturer of AODD pumps. He may be reached at carl.glauber@wildenpump.com or 718-213-7602.