At every oil and gas facility, the ability to detect leaks and related problems quickly and accurately is a top priority. Leaking equipment can slow production, lead to costly damage and create unsafe working conditions. Incorporating remote monitoring software solutions and accompanying technical support is an important step in reducing faults and failures that can compromise the success of an oil and gas operation.

In late December, a software monitoring solution at an oil and gas facility detected fluctuations in barrier fluid seal supply pressure on a pump equipped with a pressurized double seal. This pump had recently been started after several months of outage. 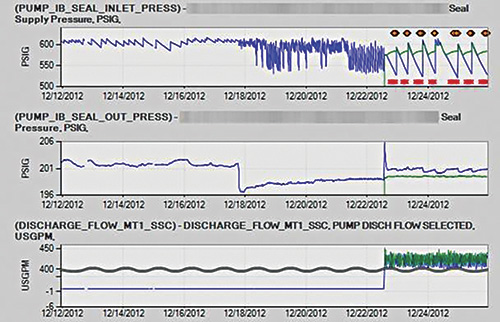 The end user was out of the office at the time, so the software provider’s industrial performance and reliability team notified the user at home about this issue.

While investigating the problem, the user discovered that a seal on the pump was leaking, which was causing the rapid fluctuations in the barrier fluid seal supply pressure. The user was able to take the asset offline and fix the seal.

If this seal had continued to leak and proper barrier fluid seal pressure was not maintained, contaminants from the process fluid could have been introduced into the barrier fluid. This contaminated barrier fluid would have resulted in instantaneous seal failure or latent seal failures. In addition to causing an outage and revenue loss, a seal failure could have resulted in serious environmental and safety repercussions. Because of the monitoring solution, the user was able to prevent these secondary and tertiary effects by repairing the seal before it failed. 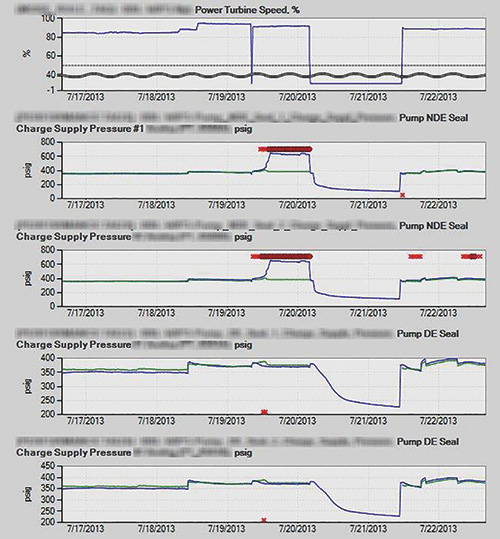 Figure 2. Pump non-drive end seal charge supply pressure took a step change up to around 638 psig. The user investigated the issue and discovered a leak in one of the seal oil accumulators. The tank had to be removed for weld repair to address the leak.

The software provider’s industrial performance and reliability center sent a high-priority notification to the end user and began tracking the issue on weekly calls.

When they received the high-priority notification, the user’s engineers took action immediately. When they investigated the issue, they discovered a leak in one of the seal oil accumulators. To fix the leak, the user had to remove the tank for weld repair.

The end user employed the early notification of increased non-drive end seal charge supply pressure to identify a seal system issue. If the issue had not been addressed, it could have caused excessive seal face loading/distortion, which could have led to seal failure.

By showing that actual values returned to expected values, the software provider helped the end user verify that the maintenance action they took was successful.

Brandon Perkins is the product marketing manager for Industrial Data Intelligence at GE Intelligent Platforms. He believes that data is the fuel of the 21st century and that the Industrial Internet will transform industries and economies by improving productivity, environmental stewardship and worker safety around the globe. He may be reached at brandon.perkins@ge.com.