Pumping systems that have many components also have many potential failure points. Proactive users monitor as much of the system as possible to address problems at the earliest sign. If these users find a malfunctioning component, they have the opportunity to schedule maintenance or repair at a time when all necessary parts and personnel are present. Comprehensive monitoring solutions prevent unexpected and expensive pump failure and downtime by identifying problems early and at their source.

The two examples in this column show how alerts can save costs and downtime. 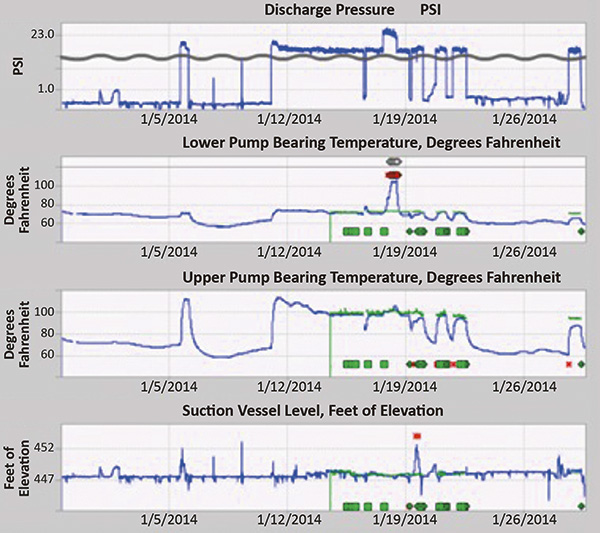 On Jan. 17, 2014, at 4 p.m., less than one week after the start of monitoring, a software solution detected an increase in motor current and discharge pressure on a pump at a municipal water management site. Immediately after this change in performance, the lower pump bearing temperature increased quickly to 107 F (42 C) with a model estimate of 73.6 F (23 C). After a period of time, the current dropped, and the temperature returned to model estimate. During the time period when the lower bearing temperature increased, the upper bearing temperature also increased slightly, 5 F (2.8 C) above model estimate. During this time, the suction-vessel level remained steady. The software provider sent a notification to the user and began tracking this issue on the regularly scheduled weekly calls.

While a root cause was never conclusively determined because of a lack of available instrumentation, the user believed that the pump’s anti-siphon valve had a problem, which could impose additional back pressure and cause the pump amperage to increase.

Because of this notification, the user became aware of an operational condition that the pumps were encountering. This type of operational condition can cause pump failure and reduce the life of the pump. The user initiated the addition of new instrumentation to the pump’s anti-siphon valve for better monitoring. 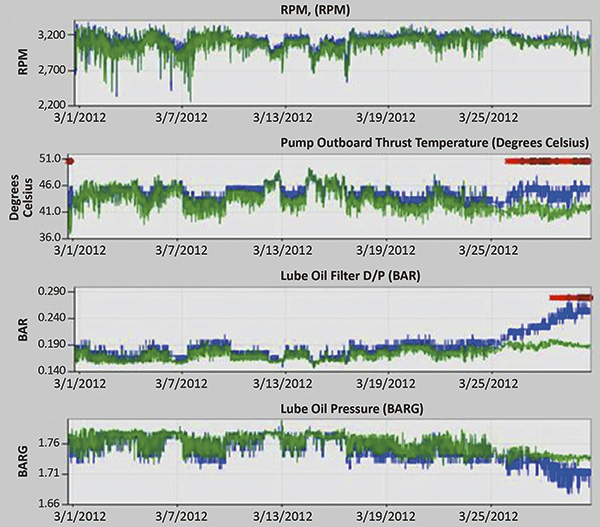 On March 25, 2012, a software solution identified a small increase in metal temperature on a water injection pump thrust bearing. Metal temperatures were expected to remain at approximately 105.8 F (41 C) but had risen to values around 114.8 F (46 C). A few days later, the software identified an increase in lube oil filter differential pressure and a drop in lube oil supply pressure (see Figure 2).

After receiving email notification for high filter differential pressure, the user investigated the issue and discussed the problem, findings and planned corrective action with the software provider.

After investigation, the user confirmed that the lube oil filter was showing signs of plugging. If left unchecked, a plugged lube oil filter could deprive the pump bearings of oil and lead to a trip of the pump or damage to the bearings. The user was able to proactively schedule a lube oil filter change before the situation was critical. The ability to schedule a maintenance action proactively means that the user can have the parts and labor on hand to perform the maintenance action, minimizing costs and downtime.

Brandon Perkins is the product marketing manager for Industrial Data Intelligence at GE Intelligent Platforms. He believes that data is the fuel of the 21st century and that the Industrial Internet will transform industries and economies by improving productivity, environmental stewardship and worker safety around the globe.