The first step in troubleshooting involves examining the pump, the fluid and the system.
by Eugene Vogel
08/29/2013

When a newly-repaired pump performs poorly, good troubleshooting procedures can help eliminate a number of possibilities—including problems with the fluid being pumped (the pumpage) or with the pipes, fittings or vessels that are connected to the pump (the system). A savvy technician with a basic understanding of pump curves and performance parameters can quickly narrow the possibilities—especially those associated with the pump.

This discussion is limited to the most common pumps in industrial and commercial applications—centrifugal pumps. The performance curves in Figure 1 illustrate how the head, flow rate, efficiency and power relate to one another for a typical centrifugal pump. As head increases, flow decreases and vice versa. 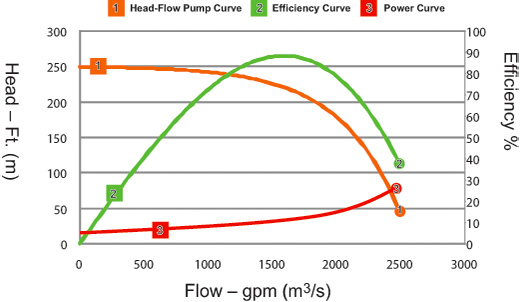 To determine if the problem is the pump, measure the total dynamic head (TDH) and flow at the pump and compare them to the pump’s curve (see sidebar,  “Measuring Pump Operating Parameters”). The TDH is the difference between discharge and suction pressure, converted to feet or meters of head. (Caution: If there is little or no head or flow on startup, immediately shut off the pump and verify that sufficient fluid is in it—that the pump is primed. Running a pump dry may damage the seal.) If the operating point is on the pump curve, the pump is operating properly. Therefore, the problem is with the system or possibly the pumpage. If the operating point is below the pump curve, the problem could be the pump, the system or possibly the pumpage. For any specific flow rate, there is a corresponding amount of head. The impeller design dictates a specific flow rate at which the pump will perform most efficiently—its best efficiency point (BEP). Many pump problems and some system problems will cause the pump to operate at a point below its normal pump curve line. A technician who understands this relationship can measure the pump parameters and isolate the problem to the pump, the pumpage or the system.

Ambient conditions, such as temperature, can change the viscosity of the pumpage. This may change the head, flow and efficiency of the pump. Mineral-based oil is a good example of a liquid that changes viscosity with temperature fluctuations. When the pumpage is a strong acid or base, dilution can change its specific gravity, which may affect the power curve. To determine if the pumpage is the problem, verify its properties. Tests for viscosity, specific gravity and temperature of the fluid are readily available and inexpensive. Standard conversion charts and formulas from the Hydraulic Institute and elsewhere can then be used to determine if the pumpage is adversely affecting the pump’s performance.

Once the fluid properties have been ruled out, the problem lies with the pump or the system. Again, if the pump is operating on the pump curve, it is working properly. In that case, the problem must be the system to which the pump is connected. Three problems are possible. Either the flow is too low, and therefore the head is too high, or the head is too low (indicating that the flow is too high). When considering head and flow, remember that the pump is correctly operating on its curve. Therefore, if one is too low, the other must be too high. Another possibility is that the wrong pump—either by improper design or by mistaken installation, including installing the wrong impeller—is being used in the application. Low flow (head too high)— A low-flow condition usually indicates a restricted line. If the restriction is in the suction line, cavitation will likely occur. Otherwise, the restriction is probably in the discharge line. Other possibilities are that the suction static head is too low or that the discharge static head is too high. For example, a suction tank may have a float switch that fails to shut off the pump when the fluid level drops below the set point. Similarly, a discharge tank may have a high level switch that has malfunctioned. Low head (flow too high)— A low-head condition indicates too much flow, and the flow is likely not going where it should. System leaks can be internal or external. A diverter valve that allows too much flow to bypass or a failed check valve that lets flow circulate backward through a parallel pump would result in too much flow and low head. On a municipal water system with buried water mains, a major leak or line break will allow too much flow and result in low head (low line pressure). Blockages and leaks— Looking for blockage or leaks in a hydraulic system is similar to looking for opens and shorts in an electrical system, except that the parameters to measure are pressure and flow rather than voltage and current. With a blockage or leak, an abnormal pressure differential will exist across the area or component involved. Locating a problem by checking the pressure (THD) is easier than by measuring the flow (see “Measuring Pump Operating Parameters”). Other system problems— Even if the pump is not operating on its curve, some system problems must be ruled out before the pump can be identified as the culprit. For example, if vapor is entering the pump because of air entrainment or cavitation, the pump will not operate on its curve, even if nothing is wrong with it. Performing vibration analysis in real time while varying the pump suction will help identify cavitation and air entrainment. If the pump does not operate on its curve after these conditions have been eliminated, the problem is most likely pump related.

When a pump does not operate on its curve and other causes are eliminated, the most likely causes are: 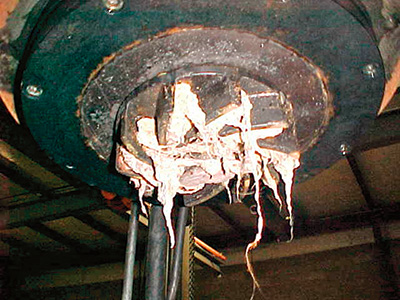 Figure 2. A clogged impeller causes pump performance that falls below the pump curve.

Other causes would be related to the speed of the pump—the shaft spinning in the impeller or an incorrect drive speed. While drive speed can be verified externally, investigating other causes involve opening the pump.

Troubleshooting pump performance is fairly straightforward. By measuring the pump’s head and flow and comparing the results to the manufacturer’s pump curve and checking for air entrainment and cavitation, the technician can determine if the problem is the pump, the system or the pumpage.

Eugene Vogel is a pump and vibration specialist at the Electrical Apparatus Service Association, Inc., (EASA) in St. Louis, Mo. He can be reached at easainfo@easa.com or 314-993-2220. EASA is an international trade association of more than 1,900 firms in 59 countries that sell and service electrical, electronic and mechanical apparatus. For more information, visit www.easa.com.