The Middle East oil and gas industry has shown moderate yet consistent growth during the past four years. The region has seen steady growth in investment and implementation of new projects to boost upstream production and downstream processing. This growth positively positions the Middle East oil and gas industry as it recovers from the 2008 economic crisis, when several projects were shelved because of weak global demand and a sharp dip in the global oil prices.

Oil and gas remains at the epicenter of the Middle Eastern economies. The low cost of production, increasing global Brent crude prices and increasing global demand are among the key factors likely to boost projects in the region. Sustained global growth and high crude oil prices promise high returns for Middle Eastern economies as they continue to invest in oil and gas production.

The Middle East is the world’s leading oil-producing region, and given the extent of its known reserves, this production is likely to grow.

The oil and gas industry in the Middle East remains a key sector for both centrifugal and positive displacement pumps. The demand for industrial pumps has been increasing at a steady pace because of new projects and retrofit demand in the region. End users in the oil and gas industry have started adopting energy-efficient pumps to reduce their energy consumption and increase operational efficiency. 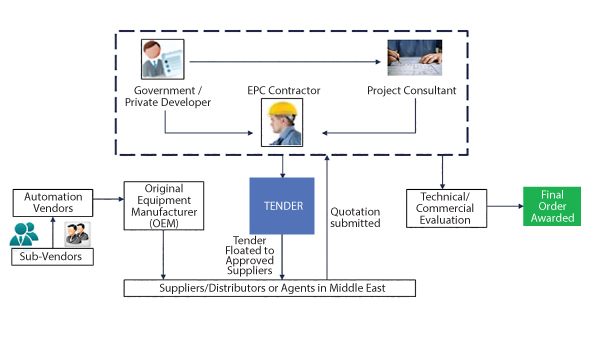 Pump manufacturers have increased their interaction with end users and process consultants, informing them of the recent technological developments and global best practices. The process consultant determines the specifications and types of pumps to be used and lists specific vendors capable of catering to the requirements. Often, the engineering, procurement and construction (EPC) contractor is the main influencer while choosing the pump manufacturer.

The competitive landscape for industrial pumps in the Middle East is dotted with established pump manufacturers such as Flowserve, Sulzer Pumps, ClydeUnion (SPX) Pumps, Ebara Corporation, ITT Pumps, Weir Pumps, KSB Pumps Limited and Ruhrpumpen. These established participants cater to a majority of the pump demand from the oil and gas industry because of their widespread presence, service facilities, brand recognition and prior experience in the region. Other participants such as Amarinth and Hyosung Corporation, also compete in this market.

The aftermarket segment includes maintenance and repair services, replacement and retrofits, and spares of the installed base for industrial pumps. The aftermarket potential for the top participants in the pumps market is substantially high because of the high installed base of their brand of pumps across the region.

Pump manufacturers have set up workshops of various sizes and capabilities across the Gulf Cooperation Council (GCC) to cater to the aftermarket segment. They provide complete maintenance, repair and overhaul services and provide spares as per the client’s requirements. The aftermarket segment presents a huge potential for pump manufacturers as end users try to reduce downtime.

The opportunity for pump manufacturers in the GCC oil and gas industry looks promising during the next five years. In 2013, the centrifugal pumps market in the GCC was approximately 950 million U.S. dollars with oil and gas accounting for more than two-fifths of the overall market. The steady growth of the oil and gas industry in Saudi Arabia, the UAE, Kuwait and Qatar (among the GCC countries) and Iran, Iraq and Egypt (among the non-GCC countries) provides a growing market for pump manufacturers in the future.

The contribution of the oil and gas industry to the Middle Eastern economies is relatively high compared with the contribution of other industries. Further investment by government-owned and private entities will develop upstream exploration and downstream processing of crude oil. As a result, the addressable market for pump manufacturers will likely increase, both in terms of new project and retrofit demands.

Although higher levels of capital investment augur well for the growth of the oil and gas industry, thereby increasing opportunities for pump manufacturers, on-ground execution of announced projects will determine the actual demand growth.

Virein Kumar Yadlapalli is industry manager with the Industrial Automation & Process Control Practice of Frost & Sullivan for the Middle East and North Africa region and an Editorial Advisory Board member of Pumps & Systems MENA. His responsibilities include developing strategic insights on key industries and offering growth consulting to clients. He has executed several key consulting engagements and research studies for the rotating equipment and process machinery markets.