Plastic pneumatic diaphragm pumps are used widely in chemical, semiconductor and pharmaceutical applications, as well as other industries that require sanitary operating atmospheres. These pumps are ideal for these applications because of their almost universal chemical resistance-due to housing materials constructed of PTFE (polytetrafluoroethylene) and conductive PTFE-and high wear resistance-thanks to housing materials that use PE (polyethylene) and conductive PE.

With the increasing degree of automation found in plant construction and operation, functional reliability is playing an enhanced role with respect to a plant's total cost. Therefore, it is crucial that the right components contribute to a plant's operation (for example, comparatively low-cost pumps that are small, but effective) as unscheduled plant shutdowns and production downtime quickly result in high costs.

Finding the proper pump for a specific production process requires a lot of legwork. Different pump modes of operation must be considered-from positive displacement to centrifugal to peristaltic-along with workload, flow rates, working pressures, etc.

One style of pump for chemical, pharmaceutical or semiconductor operations is pneumatic diaphragm pumps. These pumps are commonly used in static-fluid energy machines characterized by energy conversion in an enclosed working space with periodic energy transfer. Appropriate to their mode of operation, these pumps are classified as lift-displacement machines. Features of pneumatic diaphragm pumps are a gentle product displacement, dry-running and overload-proof operation, self-priming, insensitivity to solids, infinite variability and easy-to-operate functions.

One key to pump efficiency is its ability to provide a uniform delivery flow. To achieve this uniform flow rate, along with design-related, low-residual pulsation, pneumatic diaphragm pumps are usually designed as externally circulated double-diaphragm pumps (Figure 1). Two identical diaphragms are arranged opposite of each other, with each separating the air chamber from the product chamber, while they are interconnected by means of a piston rod. 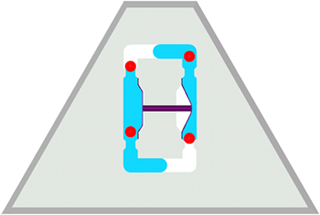 The pressurized "drive air" created by the pump's operation flows into the chamber behind a diaphragm. To enable the pump to perform its working stroke, the introduced compressed air must overcome the pump's internal friction (static/sliding friction on the sealing and bearing elements) and the diverting forces of the diaphragms, as well as the product-sided back pressure. The continuous flow of drive air causes the pressure behind the membrane to increase until the counteracting resistance forces are overcome. The diaphragm then displaces the medium from the decreasing product chamber and performs its working stroke. This forces the transported medium to be pushed out of the pressure side. To ensure adequate operation, the diaphragm is pressure balanced during the delivery stroke.

Meanwhile, the opposite diaphragm, which is connected via the piston rod, moves toward the stroke-performing diaphragm. The expanded air behind this diaphragm is allowed to escape. The medium then enters the enlarging product chamber on the suction side, allowing the diaphragm to perform its suction stroke.

The crux of this pneumatic double-diaphragm design dictates that maximum delivery volume and the maximum possible delivery head (i.e., back pressure) are the main parameters of the pump's operation. The dimensioning of the necessary wall thickness, product passage cross-sections and valve lift grow out of these design parameters. Therefore, the delivery volume of pneumatic diaphragm pumps can be influenced via the form and dimensions of the displacement chamber, the volume-changing kinematics (or diaphragm stroke) and the number of working strokes per unit of time.

The number of maximum possible working strokes (in addition to drive and back pressure) depends on the air passage volume to be filled behind the diaphragms. The dimensioning of the air passages must be optimized. On one hand, this volume should be minimized to avoid unnecessary dead volume. On the other hand, the air passage cross-sections within the pump and the air-control system must be dimensioned for the expanded, pressure-less air, as this takes up a larger volume than the pressurized drive air. The expanded air behind the diaphragm performing the suction stroke must be able to escape quickly enough to prevent the entire system from slowing down by an inefficient "air cushion."

Because of the pump's designed-in internal flow reversal, pneumatic diaphragm styles require a control that provides the diaphragms with an alternating supply of compressed air. In modern combustion engines, injection systems distribute the fuel/air mixture to the individual cylinders. Air-control systems in pneumatic diaphragm pumps alternately introduce pressurized air into the air chambers behind the diaphragms, or discharge the expanded air to the silencer. 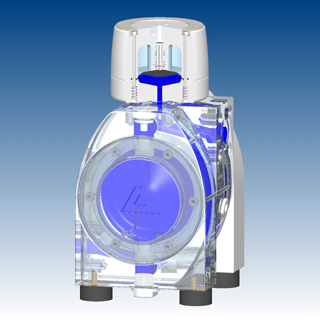 Air-control systems operate under extreme conditions. They switch up to 10 cycles per second, are subject to pressure differences up to 7 bar, come into contact with chemically aggressive atmospheres depending on the pump application, and must be reliable and maintenance-free for the above reasons.

These requirements are met only by precision controls, such as pneumatically piloted air-control systems.

The pneumatically piloted air-control system has only two moving components (the main and pilot pistons), is a 5/2 way valve (Figure 3) and consists of four different, completely metal-free components (Figure 4). The pilot piston controlled by the diaphragm opens and closes via control edges. Air passages below the main piston alternately apply compressed air to the left or right side downstream of the main piston. This pneumatically switches in a horizontal direction, alternately supplying the diaphragms with compressed air or discharging the expanded air. 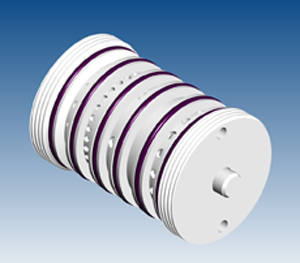 In the case of internally circulated pneumatic diaphragm pumps (which have been specially developed for the semiconductor industry), the air-control system is not arranged between, but next to, the diaphragms. The result of this design is a minimal number of surfaces in contact. This eccentric arrangement of the air-control system was previously directly operated within older pumping units.

This is where newly developed, pneumatically piloted air-control systems with built-in drag systems come into play (Figure 5). The pilot piston is decoupled from the full diaphragm stroke and, like an indirect air-control system, is initially carried along toward the end of the diaphragm stroke. The main piston control's travel distance, which depends on the pilot piston travel, decreases. The advantage is an optimization of the air-sided dead volume, as less volume is filled with compressed air and less expanded air must be discharged to the silencer. 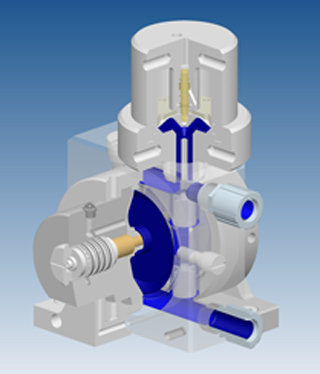 The control-valve housing, the two caps and the main and pilot pistons are made of PETP (polyethyleneterephthalate). PETP is a plastic with high strength, rigidity, form and dimensional stability. PETP is also characterized by favorable sliding and wear properties. On account of PETP's good machinability, the narrow tolerances necessary for sealing purposes can be adjusted with the associated surface quality.

Sealing of the air passages between the main and pilot pistons occurs with the aid of piston rings. Because sealing points at components that move relative to each other are always subject to friction, the static and sliding friction coefficients are minimized, and wear behavior is positively influenced. This is also an optimization process.

On the one hand, the piston rings must be capable of exerting sufficient sealing force to prevent leakages. On the other hand, the sealing force must not be excessive, as this would increase the internal friction, which expresses itself in unnecessary wear and heat development.

The air-control system is provided with piston rings of a PTFE compound. PTFE is characterized, in addition to its almost universal chemical resistance, by excellent sliding properties (μ=0.05...0.25) and temperature resistance up to 260 deg C (500 deg F). This admixture gives the PTFE parent material the necessary wear resistance for these applications.

The pneumatically piloted air-control system is a precision control system, which is based on the geometric design of the pilot piston control edges and the associated piston ring seals on the main piston, is absolutely without dead center. Independent of the position of the main and pilot pistons with respect to each other, the air passage cross-sections for reversal of the main piston at all operating points of the pump are always clearly defined.