Here is how equipment can perform in various temperatures and conditions.
by Manish Verma
by Donald (Jason) McCrary
TMEIC
09/21/2020

They have provoked widespread interest in the operator community, and manufacturers are meeting the need by developing and designing VFDs that can operate outdoors. MV VFD operators are under budgetary constraints to control not only capital expenditure (capex) costs but also variable running costs.

Eliminating the need for an indoor temperature-controlled space and HVAC systems impact the total cost of ownership (TCO) for large MV drives that are typically applied at >375 kilowatts (kW).

A December 2019 Pumps & Systems article described some ways to manage heat in MV VFDs and provided procurement guidance in a series of “questions to ask.” Several questions revolved around evaluating the performance of the enclosure in outdoor environments. It is common for VFD operators to ask, “how does an outdoor VFD enclosure prevent water ingress; deal with humidity, dust, corrosion; respond to black start conditions; and others?”

While some questions are answered by virtue of design, most are validated and proved by putting the outdoor MV VFD to the test. In this article, we consider a containerized implementation of an outdoor drive as shown in Image 1. In this implementation, a standard indoor MV VFD installed in a NEMA Type 3 enclosure. Typical specifications for outdoor VFDs are shown in Image 2.

Prototype testing, evaluation and validation is a series of activities undertaken by the VFD manufacturer after the equipment is first manufactured and built. The purpose is to demonstrate whether the VFD enclosure, as designed, meets all requirements initially specified as per market needs and to validate it from a safety, operational and performance standpoint. Prototype testing once completed is not performed again unless the outdoor VFD enclosure undergoes a major electrical or mechanical redesign.

This is an unwitnessed test and is internal to the manufacturer. Usually, the results are available for review upon request. Note that standard manufacturer quality assurance and quality control (QA/QC) tests are still conducted on every production unit.

While actual VFD testing is beyond the scope of the article, what follows is the minimum test requirements that any outdoor implementations of MV drives should be subject to when first designed. There are two primary areas of testing described in further detail: enclosure structural tests and validation, enclosure performance tests and validation

Dimensional verification
In this test, the manufacturer verifies all critical dimensions of the outdoor VFD—including height, depth and width of the overall enclosure. The door panels, door swing out clearances and wall cutouts for cable entrance are also measured.

Then, actual measured dimensions are checked against the outline drawings.

Water tightness
Any outdoor enclosure should protect the equipment housed inside from harmful weather conditions. Water tightness and compliance to the standard is perhaps one of the most critical tests performed to validate the design and the type rating of the enclosure. In North America, the NEMA 250-20142 is a recognized standard in enclosures for electrical equipment.

While the standard is limited to 1,000-voltage equipment or less, it is also applied to MV equipment such as VFDs. Most outdoor MV equipment must meet a minimum of NEMA type 3R rating. As per Table 2-2 in the standard, a 3R enclosure rating provides the enclosed equipment a degree of protection against:

Testing an enclosure to a specific NEMA 250 rating may require several tests to validate the design depending on the protection level required. For a NEMA 3R enclosure, most of this testing can be accomplished using a testing apparatus that can simulate blowing rain.

The test setup involves construction of an apparatus that can deliver a specific volume of water, which is sprayed through a set of three calibrated nozzles at an angle of 30 degrees from vertical. Image 3 shows a rain testing apparatus in use for outdoor VFDs.

Testing enclosures large enough to house MV drives poses more difficulties. Due to the sheer size of the enclosure, it is often not feasible to construct a water test apparatus that can deliver both the volume of water and surface area coverage necessary. Therefore, water ingress testing is typically carried out in stages. A mobile test apparatus that can move around the enclosure resolves the issue, ensuring that all surfaces exposed to the elements are tested for water ingress protection.

Enclosure lifting test by forklift & overhead crane
Outdoor MV VFDs are heavy pieces of equipment. They consist of transformers, iron, copper, steel, power modules
and other materials. A typical outdoor VFD, as shown in Image 1, can weigh between 15,000 and 20,000 pounds. Structural integrity during lifting and transportation is critical. This simple test of bringing in a forklift and a crane is necessary during the prototype testing stage before production begins.

During this test, the enclosure is lifted three to four times using appropriate rigging equipment. During and after the test, listen for unusual sounds, creaking, and look for signs of paint cracking, bolt separation, fastener pullout and more.

Snow load & wind speed design validation
The MV VFD outdoor equipment could be subject to snow and wind, depending on the geographic location. Unless the equipment is to be placed in hurricane or extreme snow conditions, the usual requirement for outdoor equipment is to sustain minimum 125 mph wind speeds and snow loads of at least 90 pounds/feet2. Structural calculations performed by a third-party professional engineer (PE) satisfies these test criteria.

The following tests are conducted in an environmental chamber (designed to meet and perform to International Electrotechnical Commission [IEC] 60068-3-6) that is capable of enclosing the entire outdoor VFD in full and able to simulate, for extended periods, temperature ranges between -40 C up to 75 C (-40 F up to 167 F) and relative humidity of up to 85 percent, all while the equipment is closely monitored.

Temperature rise test
Without an HVAC system installed, the enclosure must be able to provide ventilation air to the enclosed equipment that is supplied from the outside environment. For the best performance, the incoming air should remain as close to the outside ambient temperature as possible. Reduced equipment operating range and/or premature overheating can result if the ventilation air is poorly routed or picks up too much heat before entering the enclosed equipment.

Evaluation of temperature distribution is completed by placing RTDs or other temperature measuring devices at each intake point of the enclosed equipment. The equipment is then operated at full load, if possible. If the enclosure has any type of active ventilation control or remixing of exhaust air, the temperatures should also be evaluated when those controls are active. The temperatures are then compared to one another and evaluated for performance. 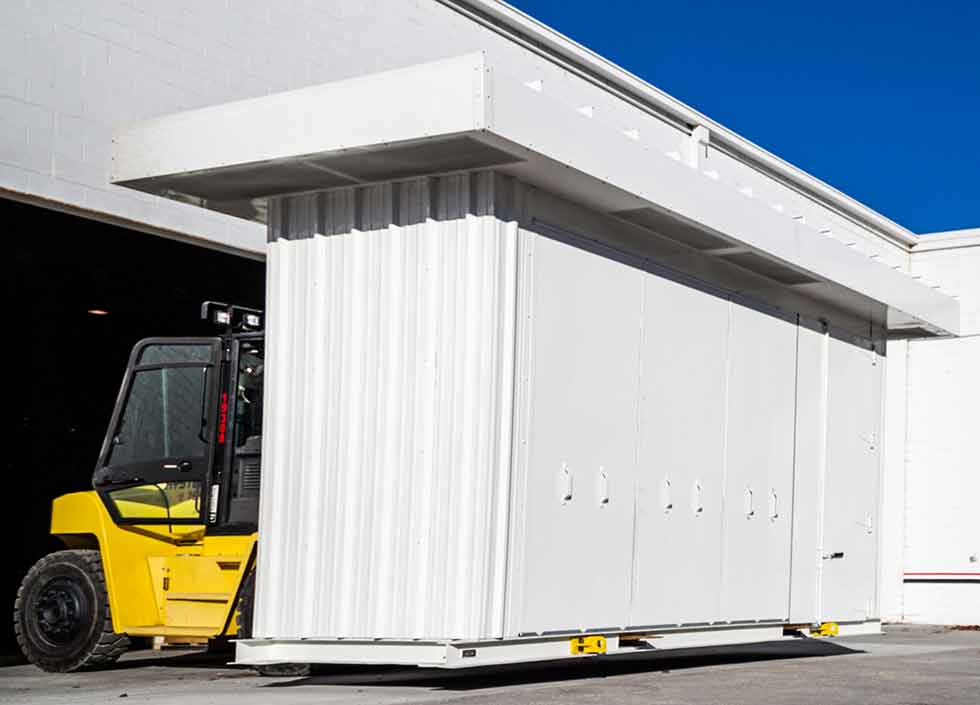 Some enclosures are also equipped with PLCs that “recover” the internal temperature if an enclosure is left without power for a period. This involves sensing the current environment within the enclosure and taking steps to bring that environment
back within the operational limits of the enclosed VFD.

Testing this feature involves placing the enclosure inside an environmental chamber and subjecting it to temperature extremes for several days while all equipment is powered off.

The enclosure control system is then energized and observed to see if it brings the internal environment of the enclosure back into the operational range of the installed equipment.

High-temperature test
Like the low-temperature test, this test involves placing the enclosure into an environmental chamber and bringing the external environment to the maximum temperature of the claimed range—for example, 40 C or 50 C (104 F or 122 F). The enclosed equipment is then operated at full load, if possible, and observed to verify it is operating properly. When sized and appropriately applied, the VFD should not trip on over temperature.

During normal operation, the relative humidity is controlled by maintaining the internal enclosure temperature a few degrees above the dew point. However, consider a scenario where someone opened the outdoor VFD in a highly humid environment, and condensation occurred inside the VFD electronics. In this case, the PLC must go through a drying sequence to remove condensation and bring the humidity to acceptable levels before energization. This test identifies the time it takes for the PLC to dry the VFD completely before power is applied. 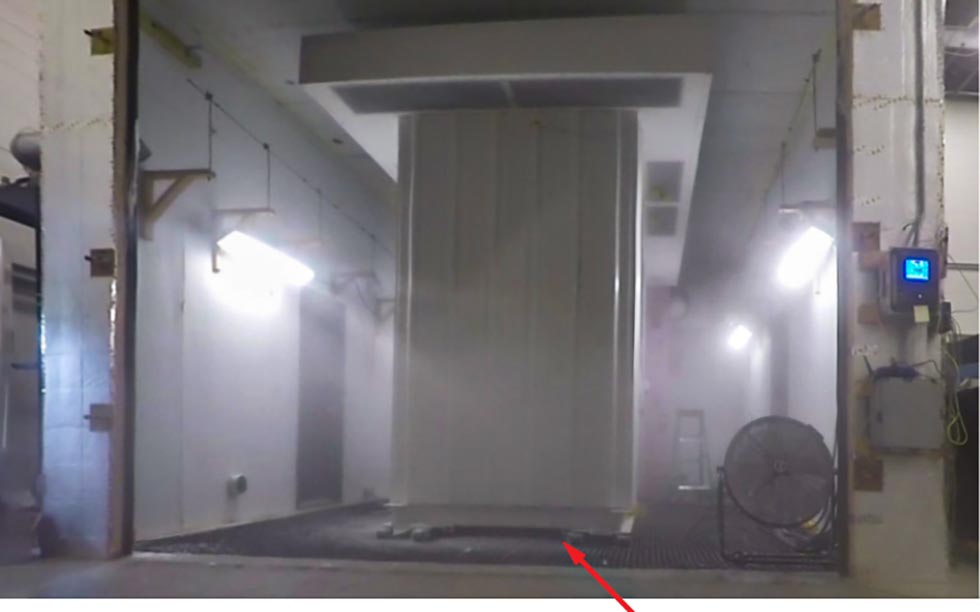 Testing outdoor drives and evaluating a manufacturer’s test approach and its results are critical in gaining confidence in the prospective outdoor MV VFD solutions. Simulating and testing under almost real-life environments provides a peak view into the due diligence that the VFD manufacturer has done to make sure that the product will perform as intended.

Containerized solutions, as shown above, have demonstrated good performance and confirm the hypothesis that properly designed enclosures can allow indoor-based VFDs to be moved outdoors, and customers can reap long-term benefits in terms of lower capital and operational expenses.

Donald (Jason) McCrary is a development engineer with TMEIC. He is responsible for designing, evaluating, and testing electric power conversion equipment and controls.

Manish Verma is a business development specialist with TMEIC. He is responsible for providing technical guidance for new product development from idea generation to product launch. For more information, visit www.tmeic.com