Determining the right size and number of grinder pumps before installation ensures consistent performance.
by Grundfos
09/18/2014

During operation, all pipes from several locations are pressurized up to several bars, resulting in the pressure class for the pipes to be at least nominal pressure (PN) 6.

In most cases, the pressurized system is connected to a gravity sewer. The one-way-in, one-way-out fishbone-shaped network must not contain any loops. Free passage is necessary for proper results.

The volume of the station accommodates all the domestic wastewater generated during a 24-hour period. Service staff members have adequate response time in case of a service interruption.

The pipes used in pressurized systems are most often delivered on reels and are unrolled as they are lain into the pre-dug ditches. The depth depends on local regulations and frost conditions. (Images and graphics courtesy of Grundfos)

The retention time of the wastewater in the sump is relatively long because of low incoming flow—less than 0.3 liters per second (L/s). The longer retention time causes sludge sedimentation. Some pumping designs include sloped side walls and a reduced bottom design to keep the pumping station clean and maintain consistent performance.

Grinder pumps are specifically designed to pump untreated sewage from a limited number of households. The grinder system at the pump inlet grinds the household waste carried by the water. The wastewater should not contain water from roofs or other hard surfaces with sand or small stones. The particles could cause abrasion, damaging the grinder system and clogging the pump inlet.

To prevent sedimentation and air accumulation in the pressure pipes, the velocity in the pipe must be at least 0.7 meters per second (m/s). In landscapes that are extremely hilly (with slopes that are greater than 10 percent), air release valves should be installed at the high points. 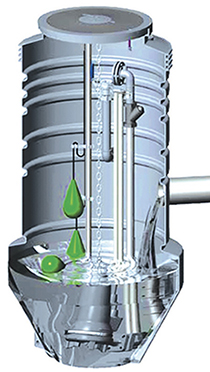 The sloping sides and narrow bottom of the sump design help prevent sedimentation.

The pump capacity for one household of three to four people consuming about 150 liters per day per person varies from 1 to 1.5 L/s. The pump capacity will increase with the number of households connected to one pumping station. In all pipes in the system, the minimum velocity should be reached at least twice per day.

The design of the pressure sewer system depends on the duty point of the grinder pumps and the length of the interconnected pipes—and their associated losses. Large systems with several pumps risk failing to reach optimum design conditions. Long retention times and sedimentation in the pipes could lead to a high risk of gas formation.

Each individual branch of the system should be flushed at least once each day. In large systems in which the main header is not flushed daily, special flushing pumps must be provided to create the minimum velocity and flush the pipe. The installed centrifugal pumps adapt themselves easily to the system. The duty point moves along the pump curve with system losses. Each pump should work without any trouble at its lowest system head.

During the design phase, pipe diameters should be determined while considering the pump capacity for the working pumps installed farthest from the system’s outlet point (treatment plant or gravity pipe). 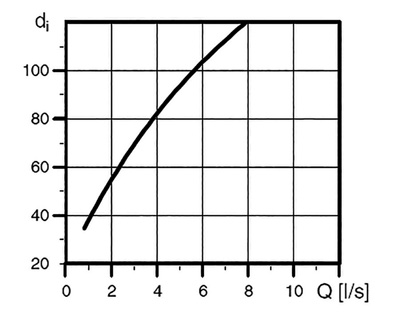 The figure shows the relationship between inner diameter of the discharge pipe (di) and the flow (Q), according to EN 12050-1. The curve shows a velocity of 0.7 m/s.

The number of pumps to be considered can be calculated using the Poisson distribution. As a general rule, roughly 3/4/5 pumps can run simultaneously in a system of 30/60/90 installed pumps with a probability of less than 2 percent.

No system matches all recommendations. Diameters and pumps are often changed and recalculated for better, individual results. In such situations, pump manufacturers can assist with simulation tools. These tools can provide a reliable picture of the designed system before construction commences.

Grundfos is a global pump manufacturer. The company has an annual production of more than 16 million pump units and provides centrifugal pump products for several industries, including water supply, wastewater and HVAC. For more information, visit www.grundfos.com.