On March 6, a software monitoring solution detected an issue with three combustion turbine exhaust thermocouples during a steady state run that was the turbine's first run after a hot gas path inspection. As this combustion turbine varied load between 100 and 155 megawatts, intermittent deviations appeared in thermocouples 3, 4 and 6. The exhaust thermocouples were expected to have values between 1,100 and 1,200 F. Actual temperature measurements varied as much as 100 degrees below expected values. 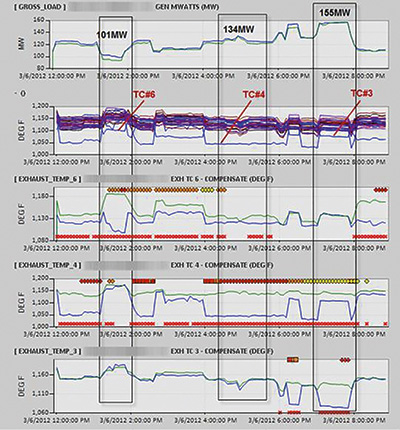 Since this hardware was recently replaced, the end user was interested in further evaluating this combustion issue with the original equipment manufacturer (OEM). The OEM investigated and eventually replaced combustion nozzles 12 and 13 during a subsequent planned maintenance outage.

Finding this issue early helped to ensure the end user did not take a forced outage during its summer run season. This end user is under a long-term service agreement so it was not liable for the replacement costs of the combustion nozzles. The end user estimated that, by detecting this issue early and preventing a problem in the summer peak season, it was able to avoid more than $350,000 in lost power production revenue.

In the end of December, a software detected an increase in steam turbine condenser backpressure, from a normal operational pressure of approximately 3 inches of mercury (inHg) (or 10.1 kilopascals (kPa)) to values as high as 6 inHg (or 20.3 kPa). The software provider notified the end user and began tracking the issue on regularly scheduled calls. 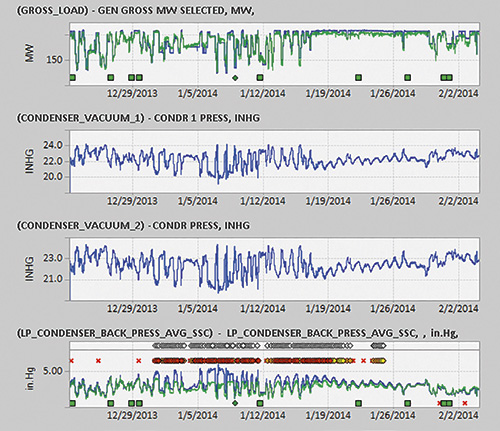 Figure 2. These charts include the condenser vacuum measurements, which changed from about 22.7 inHg (or 76.9 kPa) to as low as about 6 inHg (or 66.8 kPa). The bottom chart shows the condenser backpressure averages. Unusual readings started in late December and returned to normal after cleaning in January.

The plant discovered that the cooling tower had a chemistry upset. The upset deposited a light film of sediment on the condenser tubes. After a cleaning solution was introduced into the cooling system in mid-January, the condenser back pressure returned to normal.

Brandon Perkins is the product marketing manager for Industrial Data Intelligence at GE Intelligent Platforms. He believes that data is the fuel of the 21st century and that the Industrial Internet will transform industries and economies by improving productivity, environmental stewardship and worker safety around the globe. He may be reached at brandon.perkins@ge.com.