There are applications where the use of a mechanical seal would either not be considered or present major technical challenges. Here are some unusual examples of how mechanical seals can be applied to solve problematic sealing tasks.

Liquid synthetic latex is an emulsion of polymer particles suspended in an aqueous solution. It is used in making coatings, glues and gloves and more. 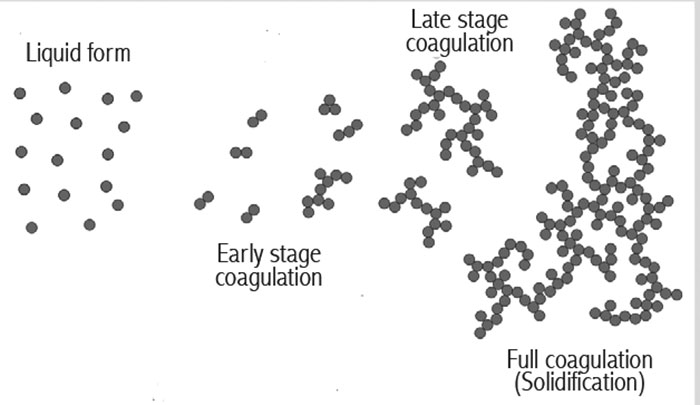 Image 1. Stages of latex solidification or coagulation when exposed to heat or friction (Images courtesy of FSA)

Sealing latex has historically been a problem for mechanical seals because it solidifies when exposed to either heat or friction (shear). When latex is exposed to heat, water separates from the polymer particles, leading to solidification or coagulation. A more challenging issue with sealing liquid latex is that when it enters the gap between the mechanical seal faces, it gets sheared, which also leads to local coagulation (Image 1).

A double-pressurized mechanical seal seems to be a successful alternative because the fluid film within it is a common barrier fluid. However, latex can still penetrate the seal faces due to thermal and pressure distortions. Both types of distortion cause the inboard seal faces to run convex, producing a gap at the outer diameters. This disrupts the formation of a uniform barrier fluid film across the faces, so latex can penetrate the gap on the outside diameter (OD) where it then solidifies (Image 2). 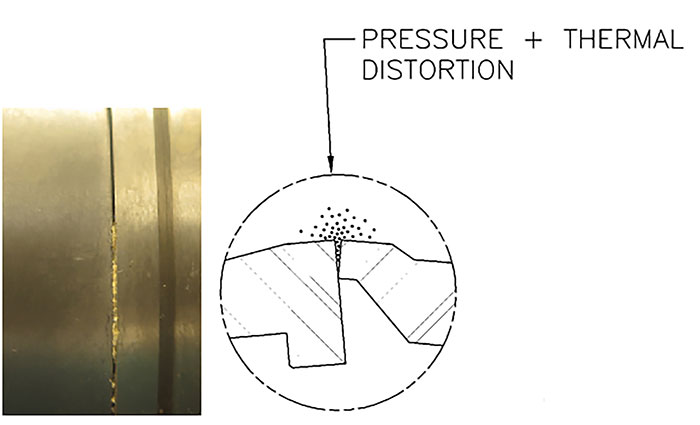 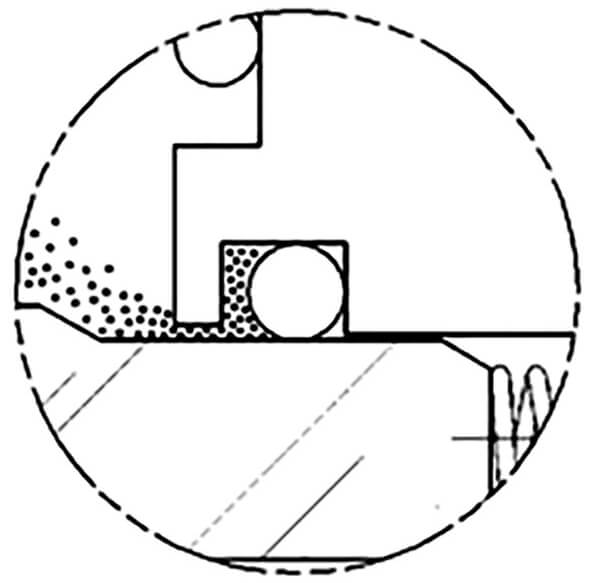 Because of these issues, mechanical seal companies have worked to develop a sealing solution to address these specific problems. In one successful example, starting with a standard dual slurry seal design, a hydrodynamic surface feature was introduced to pump the barrier fluid across the inboard seal faces from the inner diameter (ID) to the OD.

This made the faces run more closely and parallel to one another due to a reduction in thermal distortion. It simultaneously provided a controlled flow of barrier fluid, preventing the latex from penetrating the faces from the outside.

The leakage rate across the inboard seal faces was kept to a minimum by using Finite Element Analysis (FEA) modeling so it would not dilute the product and minimize barrier loss, as seen in Image 4. 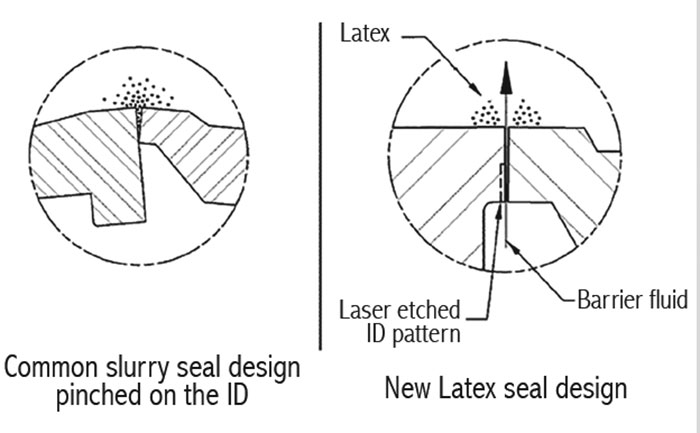 One of the biggest advantages of the new design is that it runs directly in the process without the need for an external flush or an American Petroleum Institute (API) Plan 32 to separate the latex from the inboard seal faces. Some drawbacks of a Plan 32 include:

The new seal was tested at a latex production facility in Europe, where it proved to be more reliable compared to the existing seal technology.

Expander machine units have largely been used as waste recovery systems for conversion to power and/or electricity, using different seal solutions to varying degrees of success. Simple seal types used in early development of these machines proved unreliable. One example of these earlier seals is the polytetrafluoroethylene (PTFE) seal ring (scarf-cut design) shown in Image 5. These rings are used to seal and minimize process product loss, and also to prevent cross-contamination of process media and gearbox lubricating oil. The problem with these types of seal rings is short life before cross-contamination of process media with bearing oil.

Process media leakage has proven costly, and cross-contamination of process and gearbox bearing oil after a relatively short seal operation is another critical seal issue. High process gas pressures and temperatures for expander applications limit the use of this type of PTFE seal rings.

Other seal types used for expanders and other waste recovery systems include lip seals, labyrinth and/or noncontacting seals. Applications with more demanding leakage and life requirements restrict use of these seal types.

A double mechanical seal design is recommended, with a rotating mating ring mounted into an adapter that is press fit sealed at ID to the shaft or rotor for positive drive. In this arrangement, the same spring-loaded stationary seal is positioned on each side of the mating ring face, one on the process side and the other on the bearing oil side. Each seal side should be capable of handling axial shaft movement of as much as 0.008 inch in either direction during operation.

Specialty face materials and secondary elastomer (O-ring) materials are incorporated to handle boundary lubrication or intermittent dry runs, as well as chemical compatibility. In other turbo expander applications, there are multiple stages involved, where in some stages the seal could be subject to vacuum conditions. 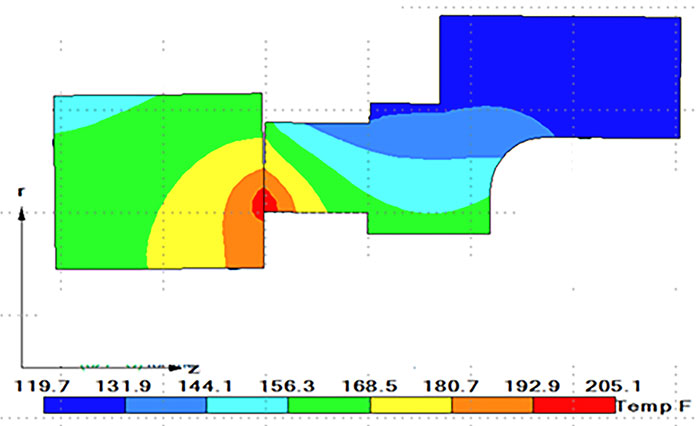 Finite Element Analysis (FEA) (Image 6) is used to verify seal performance at the various stages and operating conditions of expander operation as noted in the following:

Dry powders can make sealing difficult for many reasons, primarily because an attempt to use sealing devices that contain or require wet lubricants often results in clogging of the powders in and around the sealing device.

Depending on the type of powder being sealed, this can be catastrophic for the process, the sealing device and the equipment.

Horizontal ribbon blenders are generally slow rotating with longer slender shafts than those used in pumps, which are typically sealed with mechanical seals. It is not uncommon to see these types of equipment sealed with traditional compression packing, as the perception is that the packing offers low cost, easy maintenance and relatively trouble-free operation at low speeds. To prevent the packing-to-shaft interface from directly contacting the powder, the packing is often flushed with nitrogen or compressed air. This should blow the powder away from the lubricant-impregnated packing and prevent clogging.

Appropriate steps ensure the nitrogen or air used to flush the packing is itself not only clean and dry, but reliable. Any reduction of flow or pressure could allow the dry powder direct access to the packing-shaft interface. Split mechanical seals are an alternative to packing in dry powder ribbon blenders and can be operated without the need for flushing.

Material advancements allow dry powders to be sealed effectively without concern of heat or degradation of the seal from penetration of the powder. A common means of improving load and wear of carbon/graphite mechanical seal faces has been to introduce metallic-based materials into the formulation.

There is an alternative, as siliconized graphite materials are made using a chemical-vapor reaction process that converts exposed areas of an electrographite to silicon carbide. This produces a range of materials that exhibits properties including a hardness approaching monolithic silicon carbide, with a modulus closer to that of electrographite.

These materials also provide manufacturing benefits. Because the size does not change during the reaction process, the creation of complex configurations through traditional turning and grinding machining are enabled. Surfaces are then converted to silicon carbide in a cost-effective manner. The siliconized surface provides increased abrasion resistance when compared to metallic options. As some residual graphite remains within the silicon carbide matrix, the resulting topography enables better lubrication to the interface, extending load capabilities. Image 7 details the structure of this material.

Next Month: FSA Introduces the 4th Edition of its Compression Packing Handbook

Bob Viloria is a senior design engineer for Ergoseal, Inc.