End users must be aware of the valve emission standards to meet industry requirements.
by Gobind Khiani
04/16/2014

An article in the October 2013 issue of Pumps & Systems discussed how to minimize leaks by applying proper design and material-selection standards. This article details new codes that have been established because the International Organization for Standardization (ISO) is currently updating certain standards, including ISO 15848 Parts 1 and 2.

American Petroleum Institute (API) 624 was updated in February 2014. A summary of the standards and their test methods are shown in Table 1.

The standards are strong. However, the community has hesitated to apply them across all businesses. While the change in the Environmental Protection Agency’s (EPA) policy is in review, business is moving forward in the rest of the world, except North America, which is actively pushing toward green and clean air pacts.

Valve emissions have been reduced in North America. However, they have increased or have been minimally changed in the rest of the world.

Current EPA guidelines have helped reduce valve emissions by handling issues such as:

End users are working closely with the standards organizations to develop mandatory requirements on API 622 and API 624, such as the following:

In fugitive emission testing, braided packing has been successful, which is cost effective for retrofitting existing and stock valves. Braided packing can be installed during shutdown or replaced during a valve refurbishment program. 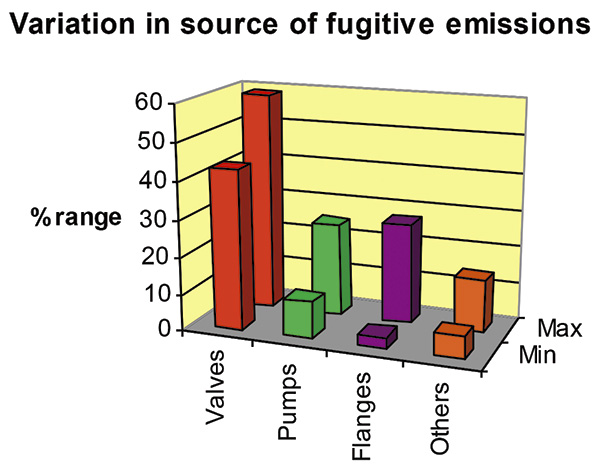 These packings have been in use since the 1990s. The testing of fugitive emissions on braided packings is achievable on higher temperatures and longer test duration compared to standard packing materials (resulting in loss of binders at temperatures higher than 200 C).

The use of braided packings for new valves is not commercially viable or practical compared to traditional die-formed graphite lantern rings. The alternative packings (specially engineered) for new valves are limited to API 602 forged steel valves (valves less than 2 inches).

The majority of users have accepted these costs because of:

Because the requirements may be interpreted differently depending on the end users’ locations, the industry is still in partial acceptance of fugitive emission requirements and the use of braided packings for controlling these emissions.

The debate continues about the development of fugitive emissions regulations from the EPA, API, ISO, International Society of Automation (ISA), National Association of Corrosion Engineers (NACE), American Society of Mechanical Engineers (ASME) and many other organizations. End users are also requesting consistent research and improvement on current practices, including testing and approvals.

One way to ensure compliance is for the industry to conduct a survey of all valve manufacturers across the globe to validate that they have met the fugitive emissions requirements during the design phase with proper allowable code dimensions and the use of braided packing.

Gobind Khiani is a professional engineer with FLUOR CANADA LTD. He has been in the energy and power business for more than 18 years and has worked in three countries (the U.K., United Arab Emirates and Canada) with more than 10 years in the Western Canadian oil and gas industry based in Calgary, Alberta.

He graduated from the University of Poona in India and completed his master’s in materials and mechanical engineering from Schulich School of Engineering at the University of Calgary, Alberta, Canada. He is a registered professional engineer in the provinces of Alberta and Saskatchewan. Khiani can be reached at gobindkhiani@gmail.com.

Valves
Valve Selection for the Safe Operation & Protection of the Pump Station
A variable speed pump station design will require additional considerations.
Valves
Valve Solutions for Mine Dewatering
Factors such as scaling, orientation and cycle time must be considered to avoid potential issues.
Valves
How to Avoid Valve Closure Water Hammer
The more gradually a system can slow its flow, the better a pressure surge is mitigated.
Valves
Ensure Safe Operation of Valves in High Pressure Applications
Understand how to maintain safety and reliability.
Valves
Spilling the Oil on Valve Quoting
A look at two-piece and three-piece ball valves and total cost of ownership.