When the seals fail on 5-year-old pumps, the conventional approach is to arrange for repair. But one property management group decided to replace the pumps completely.

Following a recent scheduled shutdown of the air-condition system in a west Toronto condominium building (13 floors, housing 303 owners), the system would not restart. An investigation revealed that both pumps were leaking badly, and it was not the first time there had been issues. 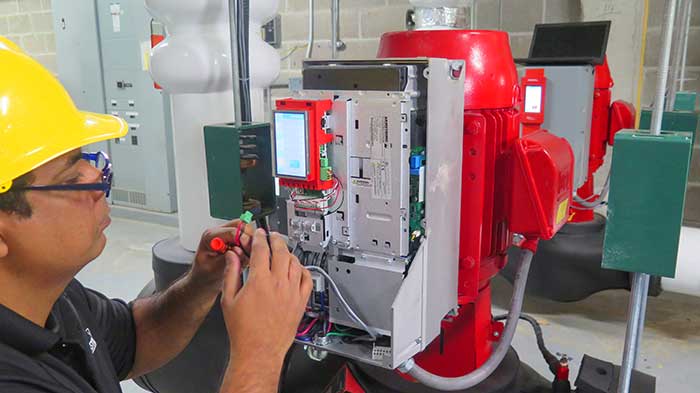 Dan Barnabic, author of “The Condo Bible,” provided his assessment of the expected useful life of building systems in an article from HuffPost in 2015. After analyzing a chunk of data, he estimated that cooling systems should function trouble-free for at least 12 years, heating for more than 20 years, and plumbing for close to 50 years. An instance of equipment failing and rusting out after just five years should be considered an anomaly. There are a few possible explanations, but in this case, the team suspected overzealous cost-cutting.

“We guessed they were cheap pumps that the builder had put in to cut costs,” said Erika Elbert, property manager for Dell Properties in North York, Ontario. “It was frustrating that both pumps were leaking and one was shaking so badly I had to shut it down. If they both failed, our residents would be without heating and cooling.”

The situation seemed urgent. Whether it was the product or the installation, the two pumps were clearly corroded and deteriorating in several ways. This suggested unpredictable maintenance had followed initial warning signs.

Given the possibility of a dual failure and a disruption in hundreds of dwellings, the condominium board wanted a more permanent solution.

The business case for a total replacement was convincing.

“Variable speed technology looked promising,” Elbert said. “It saves energy and money. When we looked into it, we realized there would be big savings.”

In addition to significant efficiencies from the variable speed upgrade, new sensorless, Wi-Fi-equipped controls would provide other advantages. Pump technology has evolved a great deal in the past five years. Offerings reflect better engineering along with advanced electronics, mechanics, artificial intelligence and enhanced communications.

For this condominium, upgrading to new pumps meant that operating data would now be accessible online and could be monitored continuously by both the property manager and by fluid management technicians. The control software would make it easy to continue to commission the equipment, optimize performance and diagnose problems. It would also make it faster to implement efficiency tweaks and service.

The chosen pump replacements were variable speed pumps with a power range of 1 horsepower (hp) to 1,250 hp, and a performance range of 25 gallons per minute (gpm) to 25,000 gpm. With integrated intelligent controls, the new pumps have potential energy savings up to 75 percent over comparable constant speed or variable frequency choices.

The new pumps also included a software and service bundle with monitoring and diagnostics capabilities. Analysts supporting this bundle examine pump conditions, including vibrations and energy efficiency trajectories. They also look for any symptoms or trend lines that might lead to catastrophic failure.

Future software advances can be added to existing installations, enhancing the capability and longevity of the technology. Corrections that go beyond efficiency optimization may also be possible. On-site service is sometimes easier with connectivity, occasionally eliminating the need for a specialist in a suit to clamber over pipes in mechanical rooms to observe equipment status.

Service manuals and demonstration videos can be loaded into on-board memory, permitting service personnel to access relevant support years after the original installation of the equipment. Design engineers have developed pump control capabilities including advanced algorithms for sensorless technology, which eliminates the need for sensors. Other capabilities include soft-starting for lower electrical demand and reduced risks related to harmonics.

The best pumping solutions also offer intelligent sequencing, part-load efficiency and demand-based control. With all of these features, energy savings with today’s technology can exceed 70 percent, compared to equipment that was considered modern just a few years ago.

Once the condominium board received the savings model for new pumps, the discussion was mostly limited to, “How fast can we move into the 21st century?” Technicians replaced the them in a few days, with intelligent fluid management systems that have a flow capacity up to 550 gpm, maximum pressure of 175 pounds per square inch (psi) and a maximum temperature of 200 F.

The energy savings should quickly cover the replacement costs, especially considering the unknown maintenance issues that might have followed a lesser solution.

Condo owners may be preoccupied with immediate comfort issues, but they are also benefitting from advancing technology that created savings to offset the costs of an unfortunate situation. “The pumps were failing and leaking. We needed to choose a new route,” Elbert said. “We now have that in place, and the residents are happy.”