During the 2014 rainy season, a crucial influent pump station in the growing northwest city of Marysville, Washington, was at capacity for storm flows. Its three influent pumps needed to be upgraded to increase capacity. The existing 25-horsepower (HP) (18.7-kilowatt [kW]) pumps were barely able to keep up and overheated in maximum flow conditions. Facility managers determined that 38-HP (28-kW) pumps were the maximum size that would fit in the existing space and not exceed the motor control center (MCC) starter size. While these new pumps would provide the required flow rates for projected storm flows, the facility team was unsure if the existing standby 125-kW diesel generator would be able to run three 38-kW pumps. If direct-on-line starters (or even soft starters) were used, the generator would not be able to handle the inrush current.

Variable frequency drives (VFDs), however, eliminate inrush and improve the displacement power factor (DPF). The generator vendor did not have sufficient records on this older generator to determine maximum motor starting ability or suitability for VFD loads. But without VFDs, the existing full-voltage starters could start only two of the larger pump units on generator power.

Soft starts, such as solid-state reduced voltage starters, were not a solution either. While soft starts reduce inrush current, they apply 60 Hertz (Hz) to the stator immediately, making the motor operate in the 100 percent slip region. One-hundred percent slip with full voltage will generate rated locked rotor torque (LRT) with a corresponding locked rotor current—typically 120 percent torque and 660 percent amps, respectively. With reduced voltage starters, torque varies by the square of the voltage change. So at 60 percent voltage, the LRT is approximately 36 percent of rated LRT or, in this case, roughly 43 percent (120 percent x 0.36 =  43.2 percent). 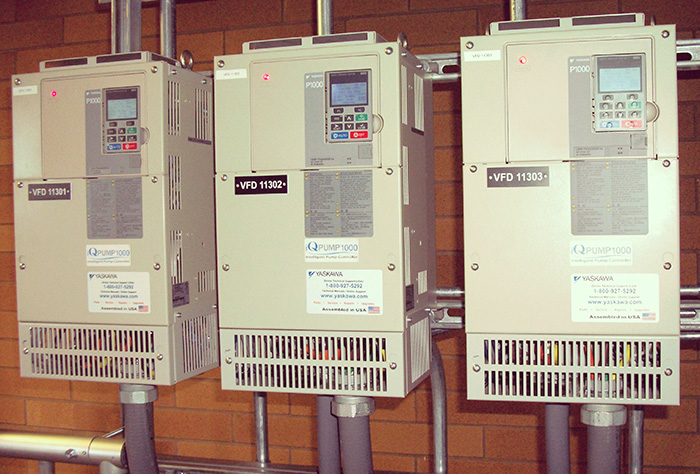 This low torque can be a problem when starting a clogged pump. At 60 percent voltage, the inrush current is approximately 250 percent, which can raise an issue with a limited supply—in this case, the generator.

Power factor (PF) can also be a problem with a solid-state starter because PF is directly related to the percentage of voltage output. Sixty percent start voltage equals 0.60 PF, which also effectively increases the generator load.

Because the facility did not have a budget for a replacement generator, the team decided to reduce the load on the old generator by incorporating VFDs.

Using a longer acceleration ramp minimizes surges in the influent filtration lagoon. The new pumps each increased the flow from the original 1,700 gallons per minute (gpm) to 2,500 gpm at full speed, 2,300 gpm at 95 percent speed and 2,100 gpm at 90 percent speed. Because the generator and regulator were older, 3 percent line reactors were added to the VFDs’ built-in 3 percent direct-current (DC) link chokes as a precaution. 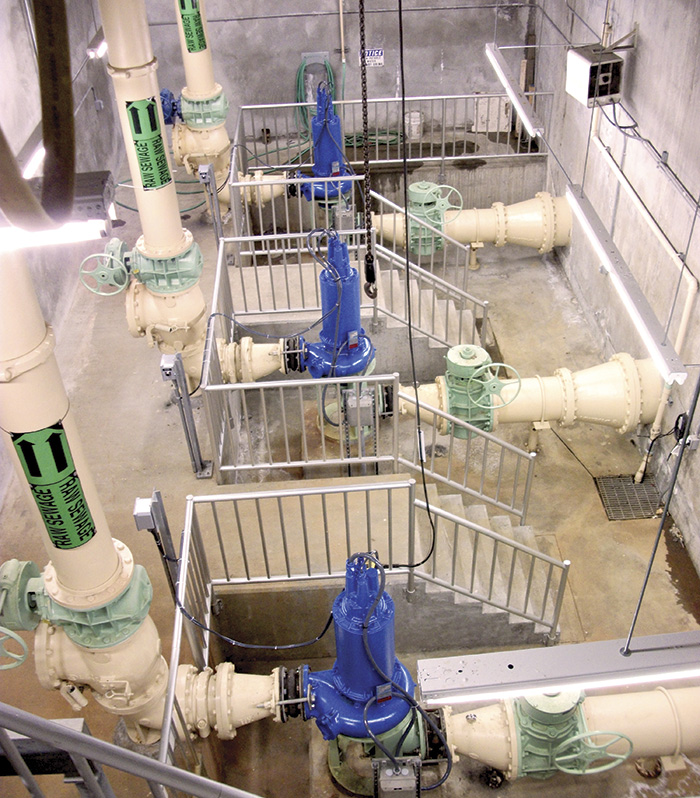 Two tests were run to assess the impact of these changes. In the first test, all three pumps were engaged at 100 percent speed while running on generator power, and the total kW load was 86 kW (69 percent) of the 125 kW rated capacity. The total flow was measured at 5,100 gpm with the present total dynamic head.

While the pumps individually can produce up to 2,500 gpm, the piping system and influent tank level restrict the total flow. The PF was 0.93 DPF, and the total harmonic distortion (THD) measured 26 percent.

Prior to the generator excitation retrofit, the VFD speeds were limited to 90 percent. Even at 90 percent speed, the gpm was still 23 percent more than the old full-speed pumps, and the generator load was 75 percent of the new full-speed load (0.75 X 86 kW = 65 kW or 52 percent load). These conditions allowed for the additional harmonic heating in the generator until the retrofit could be accomplished.

The full-speed tests showed that operating all three pumps at full speed provides more flow than presently required. The VFDs have been dialed back to 88 percent max speed for normal operation, which will provide energy savings and reduced pump wear. The power utility is interested in doing measurements and evaluation for a potential energy rebate.

The existing standby generator was an older design. Most present designs have permanent-magnet generator (PMG) exciters and isolated regulators. Adding VFDs did raise a harmonic question with the generator vendor. Measuring harmonics and total load during load testing revealed that, with simple line impedance added to the inherent DC link impedance, the THD did not present the anticipated problem of regulation.

The VFD also provided a tool to dial the total load down below the capacity of the generator to handle the pump load with VFD harmonics. For less than the cost of a larger generator sized to use direct-on-line start, VFDs were installed to bring the existing generator up to the task. The VFDs also had features that extend the life of the pumps and provide energy savings.

Key players in this upgrade

Greg Miller is Yaskawa’s Northwest VFD specialist and regional representative. He has served 10 years as a motor control designer for Electric Cranes, 12 years as a UL 508A panel shop manager and VFD application specialist, and 11 years in water and wastewater VFD sales.