The Jordan, Knauff & Company (JKC) Valve Stock Index was up 0.1 percent during the last 12 months, much lower than the broader S&P 500 Index, which was up 14.5 percent. The JKC Pump Stock Index decreased 4.5 percent for the same period.1

The manufacturing sector expanded for the 17th consecutive month according to the Institute for Supply Management’s Purchasing Managers’ Index (PMI), which increased 2.4 percent to 59 percent in October 2014. Of the 18 industries surveyed, 16 saw growth with the only contraction seen in the petroleum and coal products segment. New orders increased to 65.8 percent with the wood products segment reporting the only decrease for the month. The average PMI reading during the last 12 months was 55.8 percent with a low of 51.3 percent in January 2014.

The U.S. Energy Information Administration reported that total U.S. energy exports increased 8 percent in the first half of the year when compared with the first half of 2013 because of a 21 percent increase in petroleum product exports. Total energy imports fell 6 percent during the same time period because of decreasing petroleum and natural gas imports, which fell 6 percent and 5 percent, respectively. For the first six months of 2014, total U.S. net imports of energy as a share of consumption fell to their lowest levels in 29 years. Total energy consumption in the U.S. increased every month in 2014 compared with the same month in 2013. 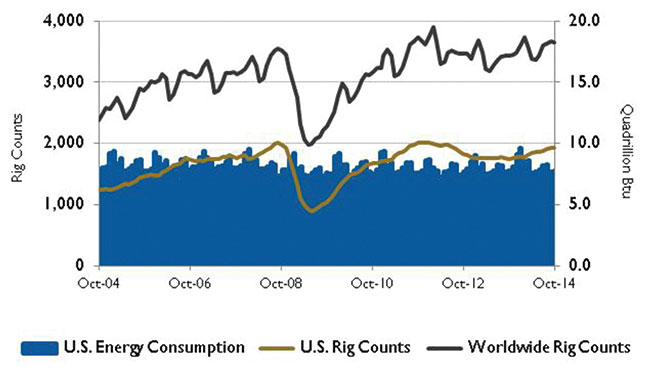 North Sea Brent crude oil prices have fallen from $112 per barrel in June 2014 to $88 per barrel at the end of October, the lowest they have been since late 2010. The price decline is a result of weakening global oil demand growth, the return of previously disrupted Libyan production and the continued growth of U.S. tight oil production. 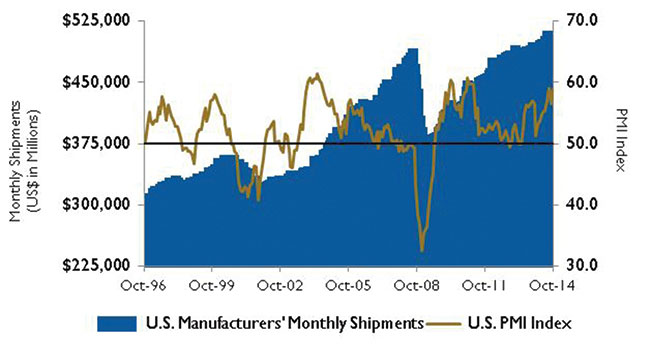 On Wall Street, the Dow Jones Industrial Average gained 2 percent; the S&P 500 Index increased 2.3 percent, and the NASDAQ Composite rose 3.1 percent for the month of October. Declining oil prices had a negative impact on
the markets, while positive earnings results and economic data helped offset losses. The markets received a boost at the end of the month when the Bank of Japan announced that it would expand its asset purchasing program to deal with its weak economic growth and low inflation.