The Jordan, Knauff & Company (JKC) Valve Stock Index was up 2.9 percent over the last 12 months, while the broader S&P 500 Index was up 1.1 percent. The JKC Pump Stock Index increased 1.6 percent for the same time period.1 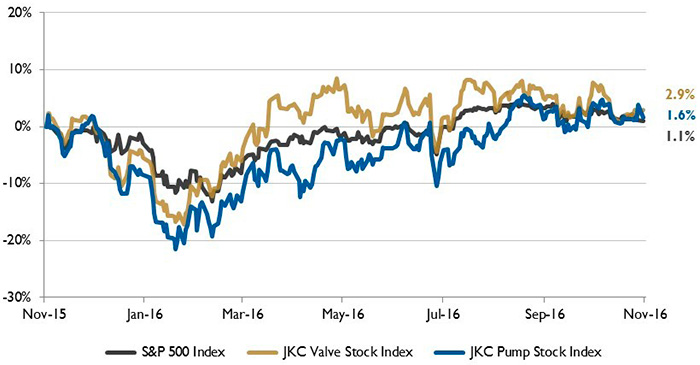 The Institute for Supply Management’s Purchasing Managers’ Index (PMI) increased to 51.9 percent in October from 51.5 percent in September, growing for the second straight month. Both production and exports accelerated during the month, increasing to 54.6 percent and 52.5 percent, respectively. Expanding for only the second time this year, employment grew from 49.7 percent to 52.9 percent. Eleven of the 18 industries reported employment growth including textile mills, printing, furniture, paper and electrical equipment.

The U.S. Department of Labor reported that nonfarm payrolls rose 161,000 in October and revised September’s job gains up. The unemployment rate declined to 4.9 percent. Jobs in the manufacturing sector declined by 9,000 and are down 62,000 year to date. The factory segment continues to face a strong dollar, sluggish growth abroad and low commodity prices. Average hourly wages gained 0.4 percent in October. Gains were widespread across most industries, led by the information and leisure and hospitality sectors. Over the past year, average hourly earnings are up 2.8 percent.

New factory orders rose 0.3 percent in September, led by sales of nondurable goods, which increased 0.9 percent. New orders for durable goods, excluding transportation, were up 0.1 percent. Demand was strong for motor vehicles and parts (up 2.6 percent), furniture (up 1.2 percent), machinery (up 1.1 percent), and electrical equipment and appliances (up 0.9 percent). Computers were down 0.9 percent, fabricated metal products fell 0.6 percent and primary metals dropped 0.3 percent. 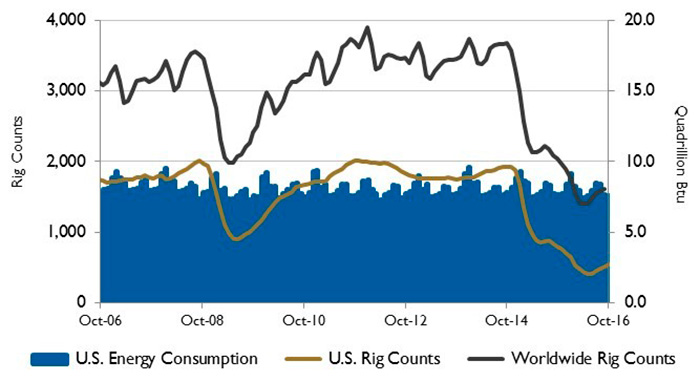 U.S. gross crude oil imports increased by 7 percent during the first half of the year compared to the first half of 2015, reversing a multiyear trend of decreasing oil imports due to increasing U.S. production. Narrowing price differences between U.S. crude and international prices provided an incentive for refiners to take advantage of lower delivered costs relative to similar domestic crude. Lower overall crude prices contributed to a decline in U.S. crude production from an average of 9.5 million barrels per day in the first half of 2015 to 9 million barrels per day in the first half of this year. The U.S. Energy Information Administration expects annual imports of crude oil to increase on a net basis in 2016 and 2017. 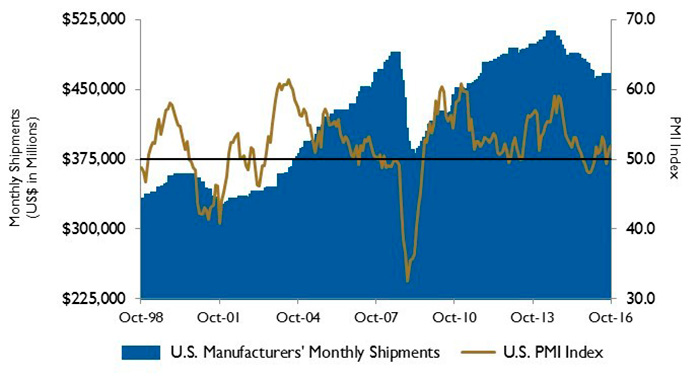 On Wall Street, the three major U.S. indices were down in October. The Dow Jones Industrial Average was down 0.9 percent, the S&P 500 Index fell 1.9 percent and the NASDAQ Composite fell 2.3 percent. Uncertainties regarding the election’s outcome, mixed corporate earnings results and weaker Chinese trade data all contributed to investor concerns. A pick-up in inflation raised chances of a December interest rate hike by the Federal Reserve Bank.

Pumps
How the FEED Process Can Lead to Oversizing Pumps
The effect front-end engineering design can have on the system
Pumps
Limiting Vibration When Using Variable Speed Pumping in HVAC Systems
Forced vibration is due to a mechanical or hydraulic component of the pump
Pumps
The Dangers of Operating Pumps at Low Capacity
The differences in vibrations that can occur within the pump
Pumps
Podcast: Understanding Water Hammer with Dylan Witte
Why you should worry about water hammer, the damage it can do and how to fix it
Pumps
Pumps & Systems Magazine to Host Basics Training Event in Chicago
Noted columnists Jim Elsey and William Livoti will be two of the speakers for the day of courses.