The U.S. economy gained 312,000 new jobs in December, the largest increase since February. Employment gains for November and October were also revised up by a combined 58,000 jobs. The U.S. added an average of 254,000 jobs a month in the fourth quarter of 2018, the largest increase since 2016. In December, health care providers added 50,000 people, professional firms filled 43,000 positions, manufacturers added 32,000 jobs and construction firms added 32,000 to payrolls.

Through October 2018, dry natural gas production in the U.S. was 11 percent higher compared to the same period in 2017, and the U.S. Energy Information Administration expects that production for the entire year will reach record levels. Driven by natural gas fired plants replacing coal fired plants in the electricity fuel mix, domestic consumption of natural gas increased in 2018 with consumption 17 percent higher than 2017 levels through the first 10 months of the year. 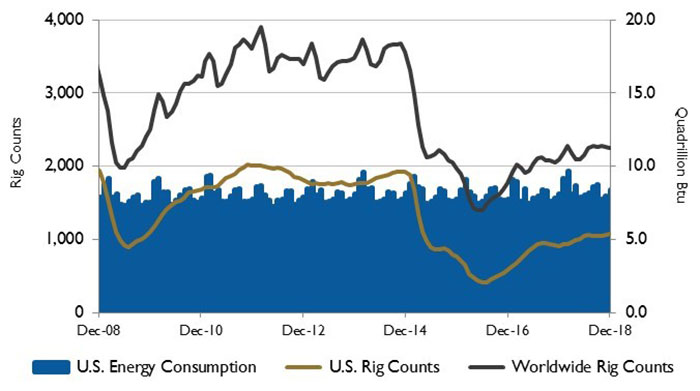 Continued increases of U.S. natural gas exports by pipeline to Mexico and additional LNG export capacity that came online during the year resulted in the U.S. exporting more natural gas than it imported for the second year in a row. The average annual Henry Hub natural gas spot price increased to $3.16 per MMBtu, $0.15 above the 2017 average. Prices increased gradually much of the year, with significant price increases in October and November, before declining at the end of December. 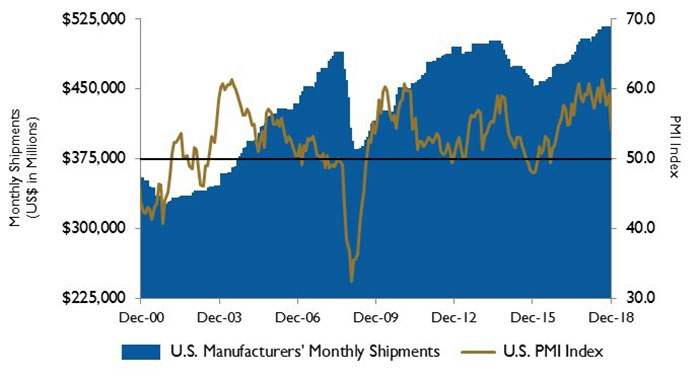 The Dow Jones Industrial Average lost 8.7 percent, the S&P 500 Index fell 9.2 percent, while the NASDAQ Composite lost 9.5 percent, marking the worst ever December for the markets after the Great Depression. The Dow, S&P 500 and NASDAQ Composite fell 5.6 percent, 6.2 percent and 3.9 percent, respectively, in 2018. All three major stock indexes recorded their worst yearly performance since 2008.

Investors were concerned about a number of issues including tariffs, the Federal Reserve Bank’s monetary policy, falling crude oil prices and an expected global economic slowdown.