The Jordan Knauff & Company (JKC) Valve Stock Index was down 2.6 percent over the last 12 months, while the broader S&P 500 Index was up 10.9 percent. The JKC Pump Stock Index fell 2.4 percent for the same time period.1

The Institute for Supply Management’s Purchasing Managers’ Index (PMI) registered 52.8 percent in April, a decrease of 2.5 percentage points since March, the slowest pace of growth in two and a half years. The drop can mostly be traced to employment, which dropped to 52.4 percent from 57.5 percent, and new orders, which fell 5.7 percentage points to 51.7. The fall of new orders points to a weakening in domestic demand and continued anemic growth overseas. Export orders declined to 49.5 percent.

The U.S. economy expanded at an annual rate of 3.2 percent for the first quarter of 2019, compared to a rate of 2.2 percent in the final three months of 2018. The growth was boosted by exports, which rose 3.7 percent; an increase in state and local government spending, which rose 3.9 percent; and higher private inventory investment. Consumer spending slowed from 2.5 percent in the fourth quarter of 2018 to 1.2 percent for the first quarter of 2019. Business spending on software, research and development, equipment and structures rose at a 2.7 percent rate, down from 5.4 percent in the fourth quarter. Residential investment fell at a 2.8 percent annual pace, marking the fifth straight quarter of decline. 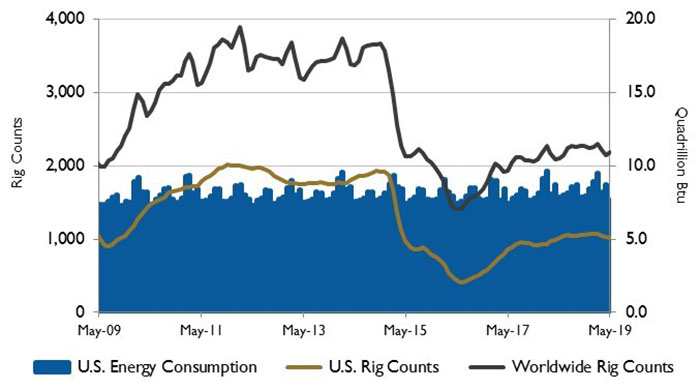 Reaching an annual average of 5.6 million barrels per day, U.S. exports of total petroleum products set a record high in 2018 for the 16th consecutive year. The three largest petroleum product exports last year were distillate, propane and motor gasoline. Propane exports were greater than gasoline exports for the third consecutive year, with Asia being three of the top five destinations. Propane is used in many Asian countries as a building block for manufacturing chemicals and plastics. 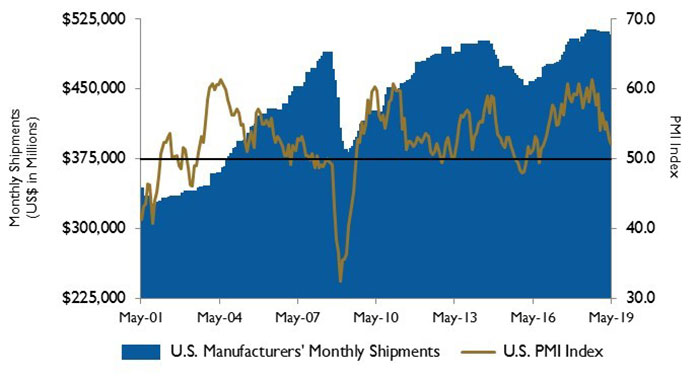 On Wall Street, the Dow Jones Industrial Average, the S&P 500 Index and the NASDAQ Composite gained 2.6 percent, 3.9 percent and 4.9 percent, respectively. Positivity about the U.S.-China trade war and strong first-quarter corporate earnings strengthened confidence. The U.S. Consumer Confidence Index rose to 129.2 in April, up from 124.2 in March.