The Institute for Supply Management’s Purchasing Managers’ Index (PMI) increased 1.5 percentage points to reach 56 percent in January, the highest reading since November 2014 and the fifth consecutive month of increases. The production index rose 2 points to 61.4 percent. The employment index increased the most during the month, rising 3.3 points to 56.1 percent. The overall PMI, new orders and production indices registered their highest levels since November 2014. 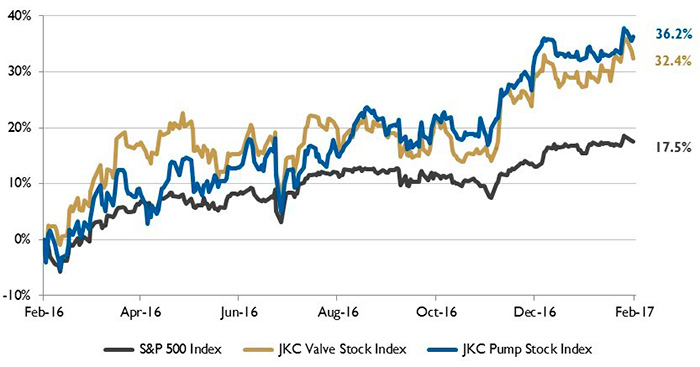 The Bureau of Labor Statistics reported that nonfarm employment increased by 227,000 jobs in January, well ahead of December’s gain of 157,000 jobs. Retail employment increased by 46,000 jobs over the month, construction added 36,000 and financial services hired 32,000. The manufacturing sector added 5,000 jobs. Average hourly earnings rose 0.1 percent in January, bringing the year-over-year increase to 2.5 percent. 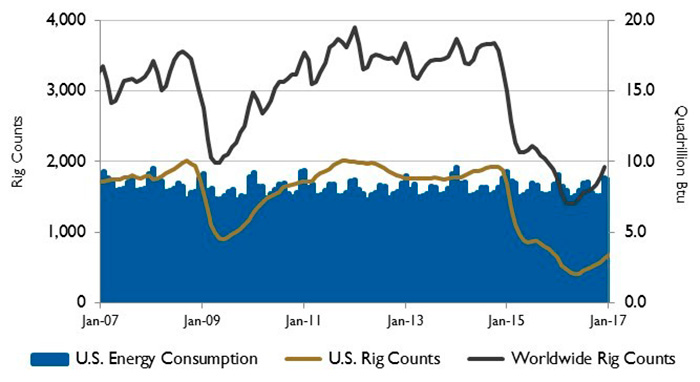 Global crude oil production and consumption are projected to increase through 2018, with consumption increasing at a faster rate than production, resulting in a tightening of the global market.

On a quarterly basis, consumption is anticipated to be greater than production in the third quarter of this year and next year. Based on annual inventory builds and a lack of a significant draw on existing inventories, the EIA expects oil prices to remain below $60 per barrel through the end of 2018. Due in part to the responsiveness of U.S. tight oil production to rising oil prices late last year, Brent crude oil prices are projected to remain flat this year, averaging $53 per barrel for the year. Prices should slowly increase in 2018, ending the year at $59 per barrel with an average of $56 per barrel for the year. 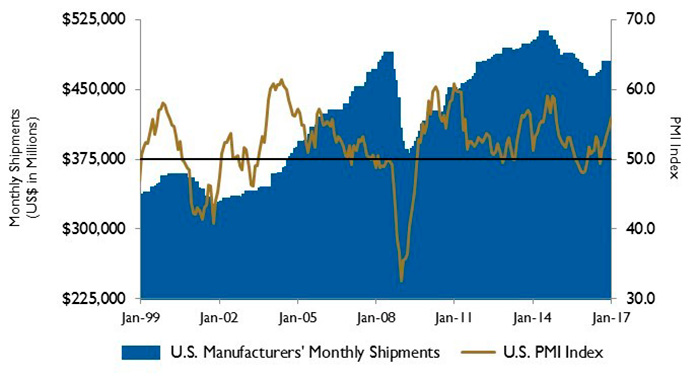 On Wall Street, the major indices advanced for the month of January for the first time since 2013. The Dow Jones Industrial Average was up 0.5 percent, the S&P 500 Index increased 1.8 percent and the NASDAQ Composite rose 4.3 percent for the month. Projections for stronger economic growth based on the new administration’s statements regarding infrastructure spending, deregulation and tax cuts boosted the markets.