The Jordan, Knauff & Company (JKC) Valve Stock Index was down 20.6 percent over the last 12 months, while the broader S&P 500 Index was up 9.6 percent. The JKC Pump Stock Index also decreased 18.4 percent for the same time period.1 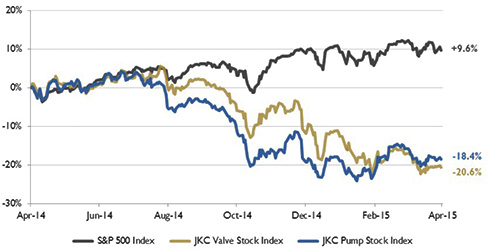 The Institute for Supply Management's Purchasing Managers' Index (PMI) decreased to 51.5 percent in March from 52.9 percent in February. The New Orders Index also decreased to 51.8 percent from 52.5 percent in February. The Prices Index increased to 39.0 percent from 35.0 percent. Ten of the 18 manufacturing industries surveyed reported growth in March with paper products, wood products, transportation equipment and fabricated metal products leading the growth. Apparel, textile mills, petroleum and coal products, and electrical equipment were all on the contraction side.

Lower oil prices have had both positive and negative effects, depending on the industry. A food and beverage respondent noted that "falling energies have helped on the cost side, while sales are getting a boost through improvements in consumer disposable income." At the same time, a computer and electronic products company suggested that oil prices are having a major effect on energy markets and, as a result, their business is slowing down.

In 2015, consumer expenditures on motor fuel are expected to be at their lowest levels in more than 10 years. Based on the U.S. Energy Information Administration (EIA) gasoline price forecast, the average U.S. household is expected to spend about $700 less on gasoline in 2015 compared to last year. During this year's summer driving season, the EIA is forecasting that gas prices will average $2.45 per gallon, compared with $3.59 last year. 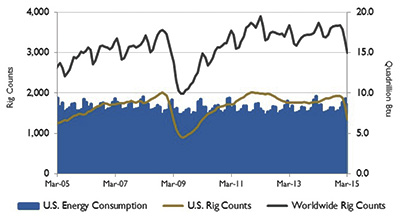 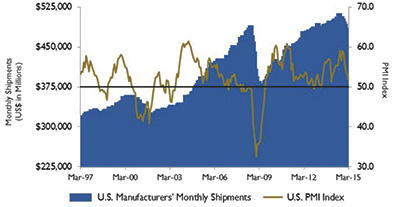 On Wall Street, all indices were down for the month of March. The Dow Jones Industrial Average fell 2.0 percent, the S&P 500 Index was down 1.7 percent, and the NASDAQ Composite declined 1.3 percent. Investors were concerned about the first quarter earnings of multinational companies due to the strength of the U.S. dollar.

For the first quarter of the year, the Dow Jones Industrial Average lost 0.3 percent, the S&P 500 Index gained 0.4 percent and the NASDAQ Composite rose 3.5 percent.