The Jordan, Knauff & Company (JKC) Valve Stock Index was down 2.9 percent over the last 12 months, while the broader S&P 500 Index was up 9 percent. The JKC Pump Stock Index fell 9.9 percent for the same time period.1

Growth of global manufacturing production remained weak in March according to the latest J.P. Morgan Global Manufacturing PMI. With a reading of 50.6 percent, the index was unchanged from February and is slightly above the neutral 50 percent mark. Overall, new orders stagnated and international trade flows declined. On a regional basis, PMI readings were above 50 percent in China, the United States, Brazil and the United Kingdom. Below 50 percent readings were seen in the Eurozone, Japan and South Korea. March saw a modest increase in global manufacturing employment, with staffing levels rising in China, the U.S., the Eurozone, Japan, Brazil and the U.K.

U.S. natural gas consumption increased by 10 percent in 2018. The electric power sector accounted for 35 percent of total domestic use, with industrial accounting for 28 percent, residential 17 percent, commercial 12 percent and other uses at 9 percent. 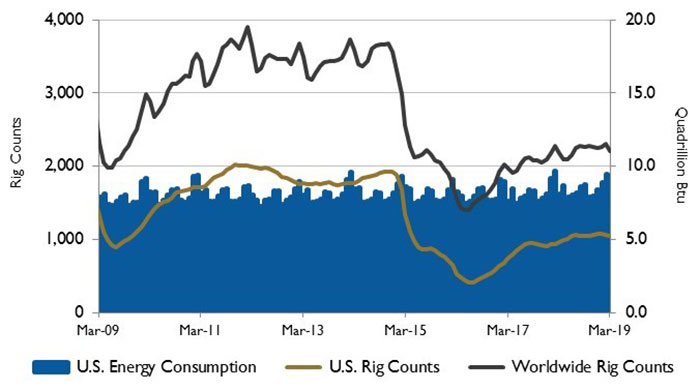 Instead of running at higher usage rates, refineries have increased capacity by 783,000 barrels per calendar day between December 2013 and 2018. 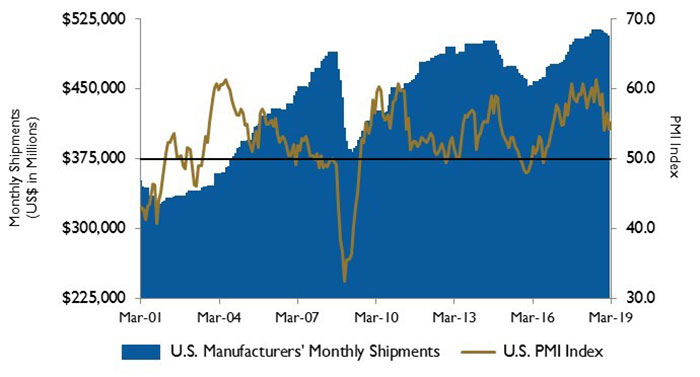