The Employment Index fell to a level not seen since 2009, coming in at 43.8 percent, down 3.1 percentage points.

All manufacturing sectors have been affected by the coronavirus and the tumult in the world energy markets. Food, beverage and tobacco products remained the strongest sector, followed by chemical, which supplies both the pharmaceutical and food and beverage sectors while benefiting from low feedstock and energy prices.

Russia and Saudi Arabia have launched an oil price war. The world’s top oil exporter, Saudi Arabia, aggressively cut most of its official selling prices and threatened to increase production to record levels, while Russia’s largest oil producer said it will ramp up production in April.

On March 9, oil prices recorded their biggest one-day crash since the Gulf War of 1991 with Brent crude falling 24 percent to $34.36 per barrel. Oil prices have continued to fall and are at their lowest level in four years after a peak of $70.25 on Jan. 6.

Oil prices had been falling for much of the year before the crash on March 9 due to a demand shock from the coronavirus’ effect on global travel and industrial activity, in combination with the warmest winter on record in the Northern Hemisphere. 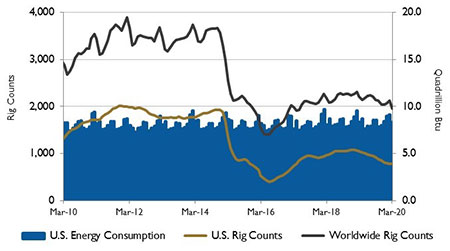 Global oil demand is expected to be down 2.5 million barrels a day in the first quarter of 2020, with China accounting for 1.8 million barrels of that drop, according to the International Energy Association (IEA).

The IEA is forecasting that global oil demand will fall this year for the first time since 2009, contracting by 90,000 barrels per day.

This was the worst month for both the Dow Jones and the S&P 500 since October 2008, due to the sharp decline in economic activity after social distancing measures were enforced. 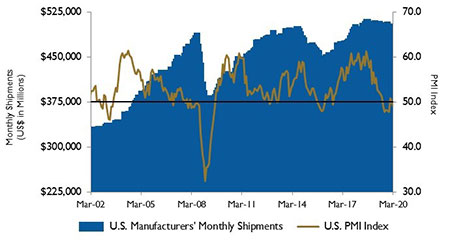 1 - The S&P Return figures are provided by Capital IQ.