The Jordan, Knauff & Company (JKC) Valve Stock Index was up 10.9 percent over the last twelve months, while the broader S&P 500 Index was up 13.8 percent. The JKC Pump Stock Index increased 4.7 percent for the same time period.1

The Institute for Supply Management’s Purchasing Managers’ Index (PMI) increased from 56.3 percent in July to 58.8 percent in August. The indices for new orders and production were above 60 percent for the third straight month. The employment index grew at it strongest pace since June 2011, up from 55.2 percent to 59.9 percent. Survey respondents cited healthy gains in sales and an optimistic business outlook. The Bureau of Labor Statistics reported that manufacturers added 36,000 net new workers in August, its fastest monthly gain in five years and increasing for the third consecutive month. 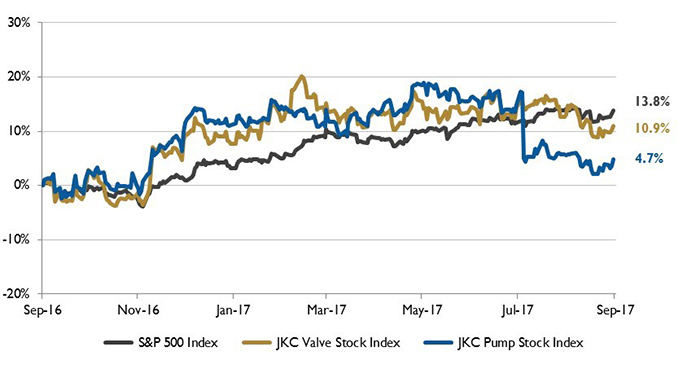 U.S. gross domestic product (GDP) increased 3.0 percent in the second quarter of 2017 according to the Bureau of Economic Analysis. Increases were seen in consumer spending, as well as increases in business investment, exports and federal government spending. Declines were seen in housing investment and state and local government spending. Consumer spending was led by increases in housing and utilities, communication services and other nondurable goods. Business investment grew in all three components: equipment, intellectual property products and structures.

The Conference Board reported that its Consumer Confidence Index rose to 122.9, just below the 16-year high reached in March and well above last year’s average of 99.8. The current conditions component rose almost 6 percentage points, its highest level since 2001. A favorable view of the labor market continued as the share of consumers expecting to see incomes increase over the next six months moved up, while the share expecting a decrease shrunk. 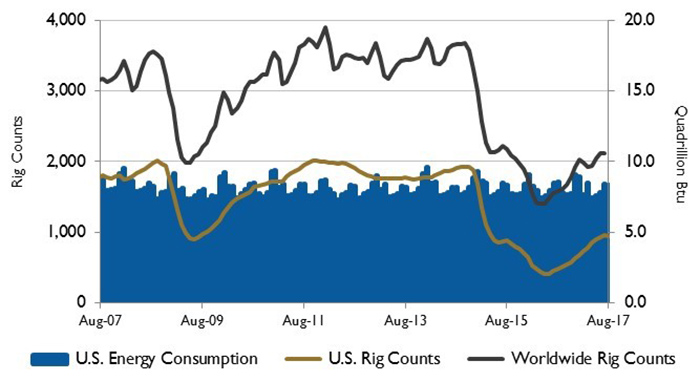 The U.S. Energy Information Administration (EIA) projects that the U.S. will export more natural gas than it imports in 2017 and throughout 2018. This net exporter status is expected to continue past 2018 because of growing U.S. natural gas exports to Mexico, declining pipeline imports from Canada, and increasing exports of liquefied natural gas (LNG).

U.S. natural gas liquefaction capacity continues to expand as five new projects currently under construction come online in the next three years, increasing total U.S. liquefaction capacity from 1.4 billion cubic feet per day at the end of 2016 to 9.5 billion cubic feet by per day by the end of 2019. Based on construction plans, the EIA expects that by 2020 the U.S. will have the third-largest LNG export capacity in the world after Australia and Qatar. 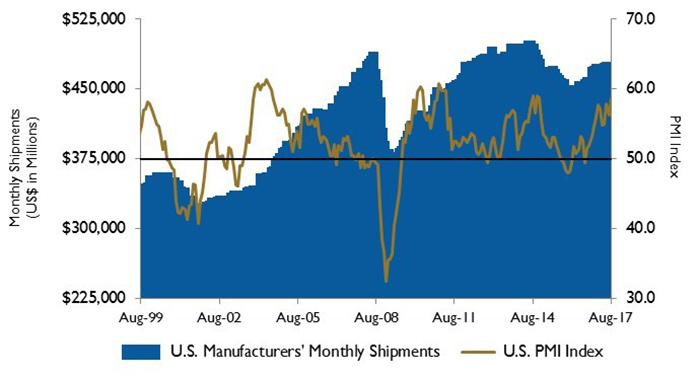 On Wall Street the Dow Jones Industrial Average rose 0.3 percent, the S&P 500 Index increased 0.1 percent and the NASDAQ Composite grew 1.3 percent for the month of August. The indices increased for the fifth straight month, with the NASDAQ gaining during nine of the past ten months. Strong economic data pushed the market up while political and geopolitical instability reduced market gains with tensions rising between the U.S. and North Korea.