The Jordan, Knauff & Company (JKC) Valve Stock Index was down 25.8 percent over the last twelve months, while the broader S&P 500 Index was up 9.3 percent. The JKC Pump Stock Index also decreased 20.6 percent for the same time period.1

The first estimate by the Bureau of Economic Analysis showed that U.S. gross domestic product (GDP) increased 2.3 percent in the second quarter of the year. The growth includes increases in personal consumption, state and local government spending, residential fixed income and exports. Federal government spending, private inventory investment and nonresidential fixed investment were all lower during the quarter. The report also revised first quarter GDP. Instead of contracting, the economy expanded at a 0.6 percent rate in the first quarter of 2015. 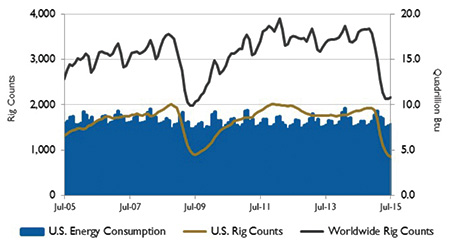 According to the U.S. Energy Information Administration (EIA), the rolling four-week average of U.S. gross refinery inputs has been above the five-year range every week of this year. Lower crude oil prices and strong demand for petroleum products, mostly gasoline, both in the U.S. and internationally have led to favorable margins. The total amount of gasoline produced in the U.S. is up 2.9 percent through the first five months of the year. Since early April, refinery utilization has consistently been above 90 percent. These record high gross outputs are the result of these high utilization rates and an increase in refinery capacity of 18.0 million barrels
per day as of January 1. U.S. refinery runs typically reach their peak in the second and third quarters of the year. 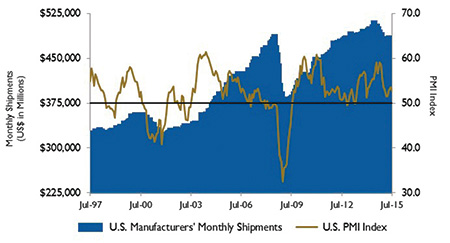 On Wall Street all indices were up for the month of July. The Dow Jones Industrial Average was up 0.4 percent, the S&P 500 Index rose 2.0 percent and the NASDAQ Composite increased 2.9 percent. Despite weak second quarter earnings, the Federal Reserve Bank remains positive about the economy and still expects to increase interest rates “at some point this year.” Overall, economic activity was mixed, with positive gross domestic product numbers and an increase in durable orders, while disappointing data included initial unemployment claims, pending home sales and consumer confidence.

Jordan, Knauff & Company is an investment bank based in Chicago, Illinois, that provides merger and acquisition advisory services to the pump, valve and filtration industries. Please visit jordanknauff.com for more information. Jordan Knauff & Company is a member of FINRA.