The Jordan, Knauff & Company (JKC) Valve Stock Index was up 17.6 percent over the last 12 months, while the broader S&P 500 Index was up 13.7 percent. The JKC Pump Stock Index increased 4.9 percent for the same time period.1

The Institute for Supply Management’s Purchasing Managers’ Index (PMI) decreased from 60.2 percent in June to 58.1 percent in July, the lowest reading since April. The New Orders Index fell 3.3 percent to 60.2 and the Production Index fell 3.8 percent to 58.5 percent. Tariffs are still a concern for respondents to the PMI with one executive replying, “We have already seen steel prices increase due to the threat of tariffs and are seeing kickback from our customers due to the higher prices.” Another issue for manufacturers is recruiting skilled workers. 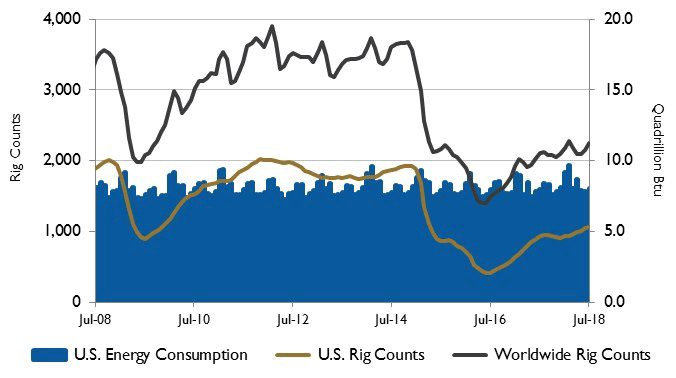 Declining for the fifth consecutive year, U.S. energy expenditures reached $1.0 trillion in 2016, a 9 percent decrease from 2015. The decrease was due to lower energy prices, since total energy consumption has remained unchanged since 2013. The U.S. average energy price was $15.92 per million British thermal units (Btu) in 2016, the lowest since 2003, when adjusted for inflation. Average energy prices reached their peak in 2008 when they averaged $24.13 per million Btu. As a percent of U.S. gross domestic product, total energy expenditures were 5.6 percent in 2016, the lowest level since 1970.

On Wall Street for the month of July the Dow Jones Industrial Average gained 4.7 percent and the S&P 500 Index increased by 3.6 percent, their biggest monthly gains since January. The NASDAQ Composite grew 2.0 percent, registering its fourth straight monthly gain. 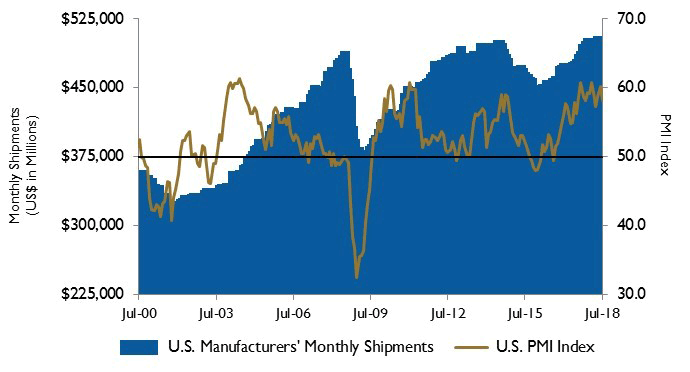 Trade war fears continued to affect the market, as early in the month the U.S. imposed tariffs on $34 billion worth of Chinese goods, which caused China to retaliate with tariffs on equal amounts of U.S. imports.