Two shaft failure investigations for two identical water injection pumps that had been commissioned for nine years showed that the main contributors to these two failures were a manufacturing error and operation well above the best efficiency point (BEP). Operating the pumps at 125 percent of its BEP for long durations resulted in wear to the system. One failed shaft was also investigated, showing rotating bending fatigue to be the mode of failure.

Here are the findings and analysis that show how investigators reached these conclusions.

The investigation was held at two salt water disposal pumps at a national petroleum and natural gas company plant in Saudi Arabia. The pumps are used to dispose of brine water produced at the gas-oil separation plant (GOSP) by reinjecting it back to the reservoir. 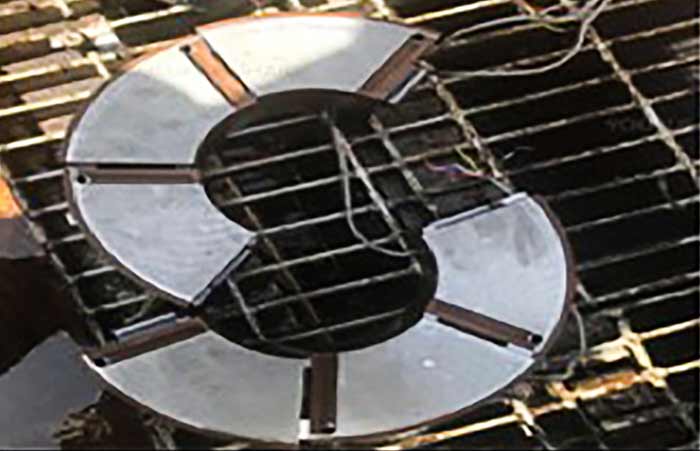 These are heavy-duty horizontal barrel pumps per AP-610 type BB5. The 6,000-horsepower pumps have a flow rate of 1,600 gallons per minute (gpm) and a differential head. The pumps were built in 2006 and were commissioned in 2008. They experienced high thrust bearing temperature during commissioning, which was resolved by upgrading the bearing from the standard hydrodynamic thrust bearing design (fixed profile thrust) to a leading edge groove (LEG) bearing design, shown in Image 1. Also, the first pump experienced suction piping coating failure, and the coating was lodged into pump suction in 2012 (Image 2). 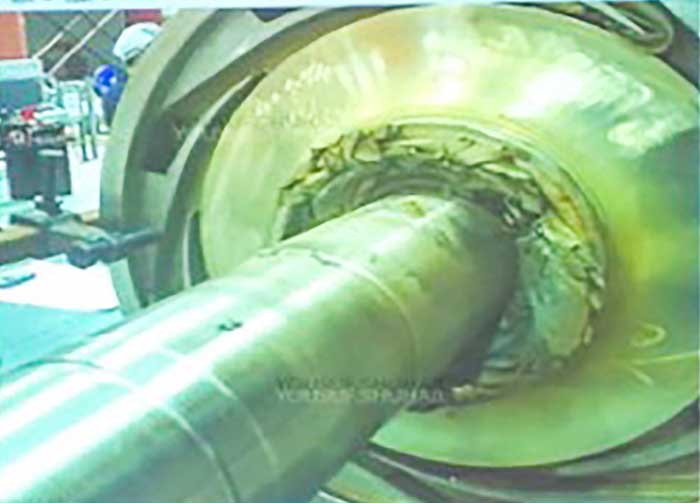 On October 2017, the pump tripped on high outboard bearing radial vibration. At the site inspection, the following observations were made: 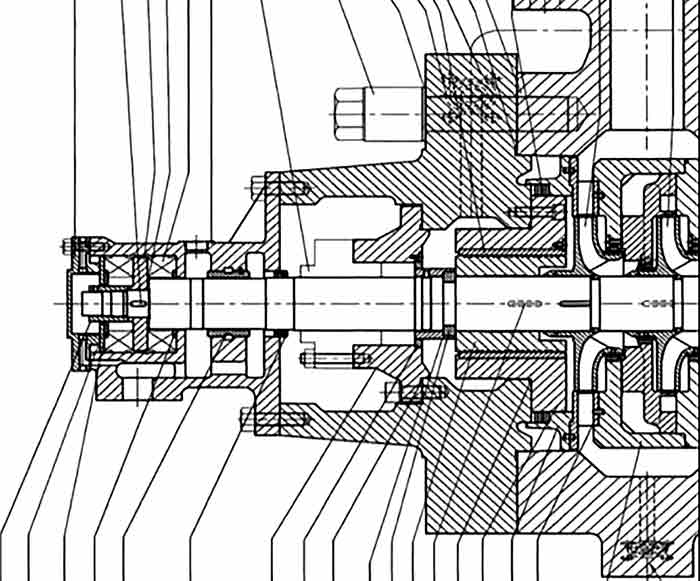 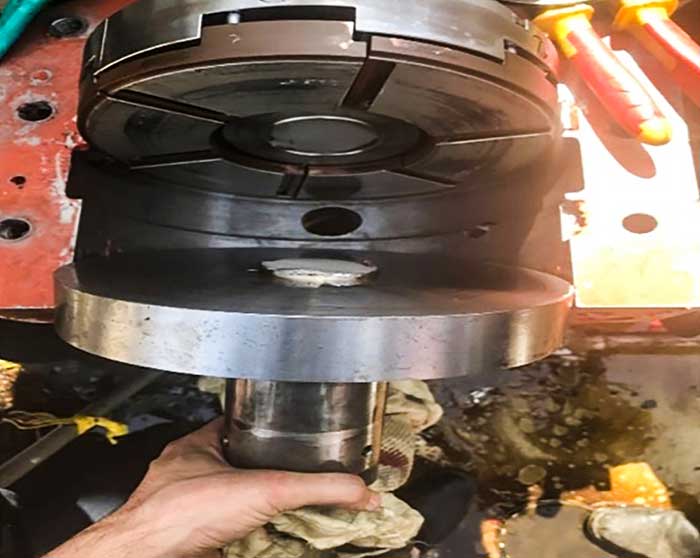 3a and b. Shaft cut location

The machine was sent to the shop for inspection, and the following conditions were found: 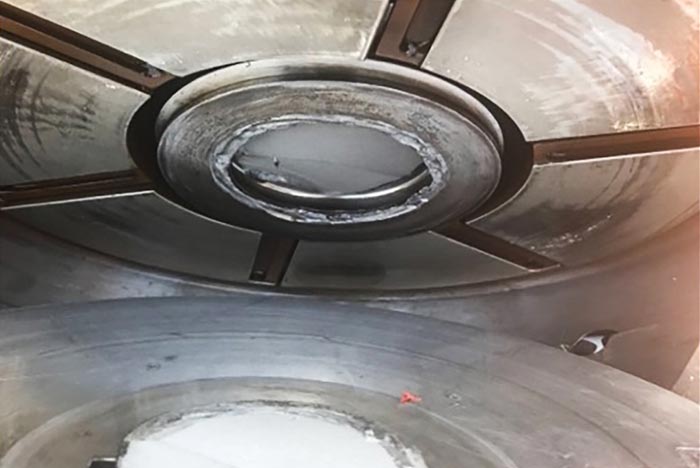 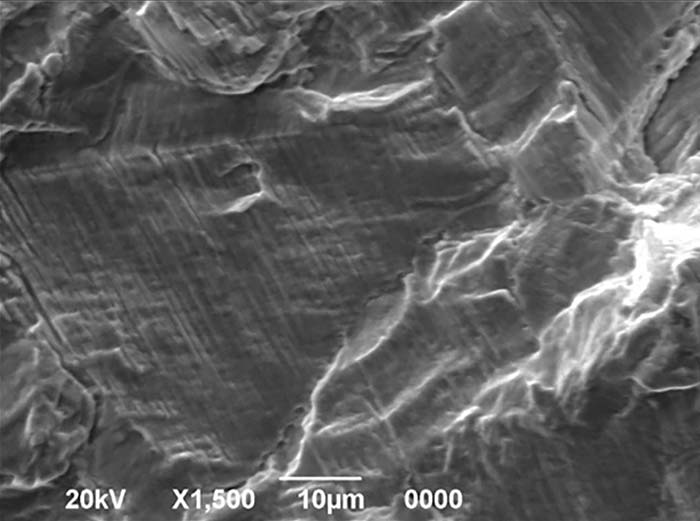 The root cause of pump shaft breakage is believed to be rotating bending fatigue as a result of uneven thrust collar washer thickness that caused the thrust collar not to set square with the shaft and resulted in cyclic loading on the shaft. This was aggravated by the high flow operation for the pump, which reached up to 125 percent of BEP. 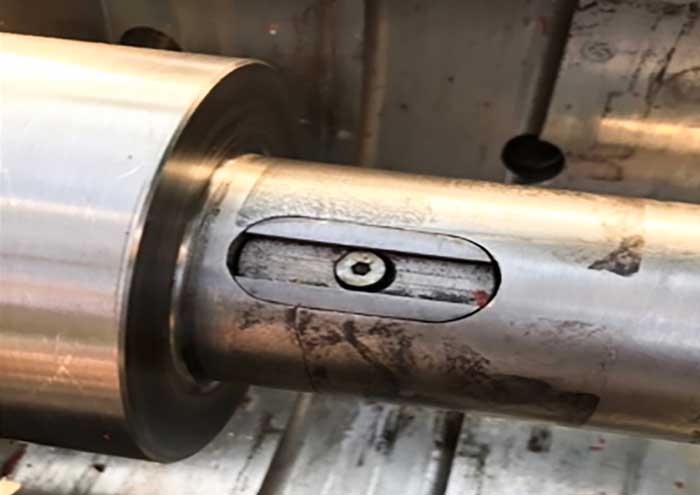 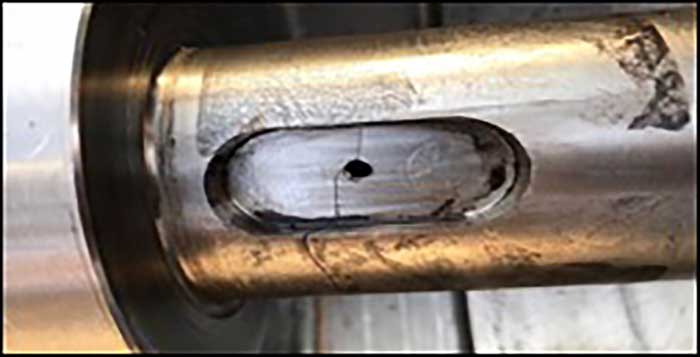 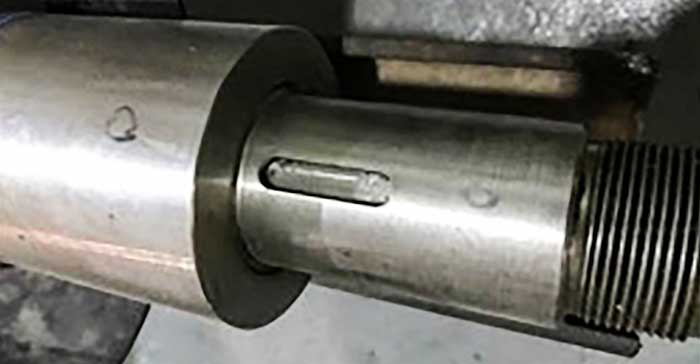 This pump experienced high drive end (DE) and NDE mechanical seal leakage. Mechanical seals were replaced, and the machine was returned to service. However, the pump tripped due to high axial displacement. The shaft axial float was adjusted and the pump started, but it tripped again for the same reason.

The NDE bearing housing was removed and the shaft was found cracked under the thrust collar key area. The shaft key slot had an insert that was added due to a manufacturing error. This insert was fixed to the shaft by a screw to correct the keyway (Images 6 and 7). This design mandated a threaded hole in the shaft, which acted as a stress riser and caused the initiation of the shaft crack. Image 7 shows a normal key slot for the other pumps that did not suffer from this manufacturing error (i.e., no insert).

Further inspections tested the stability of the thrust collar assembly. Measurements were taken for the shaft diameter and the thrust collar inner diameter. The clearance was found to be 0.004 inch, which is high compared to other sister pumps (0.001 inch). This high clearance contributed to the failure since it will not allow the thrust collar to set correctly and causes a rocking action, increasing the forces on the shaft. 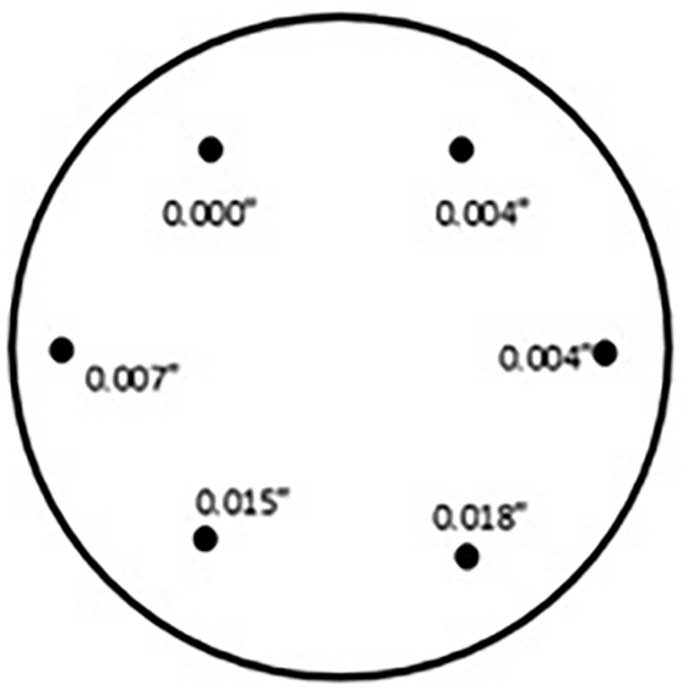 The thrust collar was found with rubbing marks and a rubbed-out washer. Face runout measurements were taken on the thrust collar (Image 8), showing a high, uneven gap between the collar and bearing, which caused a cyclic bending load on the shaft, causing it to crack at the stress riser location in the keyway hole.

The root cause of the cracked shaft was the keyway insert screw hole, which acted as a stress riser and was aggravated by stress from the high clearance between the thrust collar and the shaft. This was due to cyclic loading on the shaft. The locknut looseness also contributed.

Both shafts were repaired by a stubbing method. The national petroleum and natural gas company used old Inconel 625 shafts from other pumps to make two small stub shafts. The pump damaged shaft was cut, drilled and threaded to add a new stub shaft section. Once the new sections were in place, the shafts were welded together to form a new shaft. The new section was machined to tolerance to ensure proper fit and acceptable shaft runout (Image 10). The pump was put back into service with no issues. 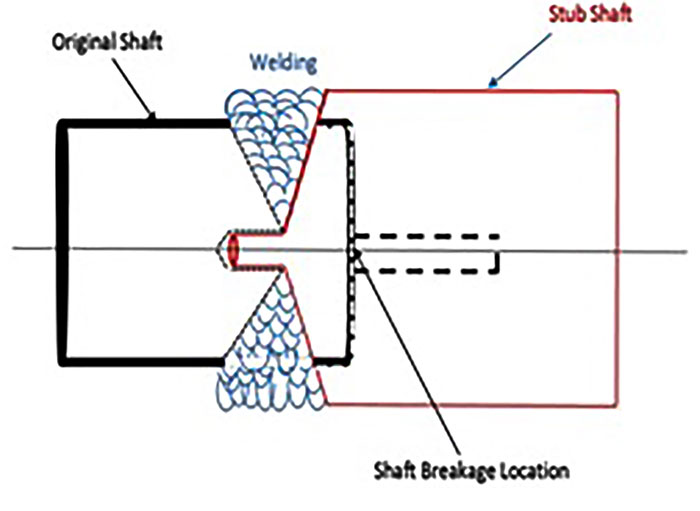