What a Drag: Effects of Fluid Viscosity on Centrifugal Pumps

A frequently stated expression around the pump industry is that viscosity is the Kryptonite of centrifugal pumps. Pardon the allusion to Superman, but it is a reference most of us not only relate to, but also understand. Further, viscous fluids do have a negative and weakening effect on centrifugal pump performance.

Isaac Newton was probably the first person we know to quantitatively define a coefficient of viscosity. His concept and related work was not completed, but was later refined by Jean Leonard Marie Poiseuille (see Poiseuille’s Law).

Why are we concerned about viscosity in regards to centrifugal pumps?

Mainly because viscosity has such an extraordinary and often negative effect on centrifugal pump performance. An increase in viscosity will dramatically reduce a pump’s efficiency in conjunction with marked reductions in head and flow. The net result is an increase in the brake horsepower required for the driver.

All centrifugal pump performance curves are based on pumping water, unless stated otherwise. When I started in the pump business, there were no computer programs to cipher the necessary viscosity corrections and the manual methods could take hours to complete. With the advent of computerized programs for pump selection, it is now simple to correct the pump’s performance for viscosity in one keystroke, but we often overlook the details and effects of what viscosity changes do to the pump performance and especially the required brake horsepower.

Prior to computer programs, there were basically three methods to correct a centrifugal pump’s performance from water to viscous.

In a perfect world, a centrifugal pump performance “curve” would actually be a straight line, but in the real world, it is curved due to losses in the pump. The major factors are a combination of mechanical, leakage, shock and disc friction losses. Disk friction is the major contributor and most important factor when quantifying the losses. The curves as mentioned are based on water performance, but with applications on viscous fluids those water curves must be corrected for the viscosity to be accurate. The head, flow, efficiency and brake horsepower (BHP) curves will all require modification (viscous corrections).

At what minimum value of viscosity to start corrections?

The pump manufacturer is the best source for this value, as it will depend on the application, fluid personality and the pump geometry. Note that at 100 centipoise, the viscous effects will be significant. I will state that at 30 to 40 centipoise or greater, you should use the corrections or risk adverse effects. I also recommend that somewhere in the area of 5 to 10 centipoise, you must at least be aware and conscious of the effects however minor.

Since checking the correction curves is so easy these days it would be unwise not to check.

The smaller an impeller is, the more likely the disc friction effects will be higher simply because the surface area of the impeller and casings have more interaction with the fluid than in a larger pump.

Maximum Viscosity for a Centrifugal Pump

I am frequently asked; what is the maximum viscosity that a centrifugal pump can handle? My short answer is that “it depends.” A better and less flippant answer is to consider the reduction in pump efficiency (also head and flow) and calculate the maximum required and corrected horsepower (hp) for the viscous fluid. Several references limit centrifugal pumps to a maximum of 3,000 centistokes. (Note that this limit is also published as 3,300 centistokes.)

There is an older technical paper on the subject by C.E. Petersen (delivered at the Pacific Energy Association conference in September 1982). Mr. Petersen presents an argument that the maximum viscosity can be calculated by the size of the pump discharge nozzle.

Where:
Vmax = the maximum kinematic viscosity in SSU (Saybolt Second Universal) allowed for that pump
D = the diameter of the discharge nozzle in inches.

I would only use this formula as a rule of thumb.

To be accurate, you should have input from the pump manufacturer on this subject with regard to shaft torque and hp limits. There may also be frame limits and occasionally (rare) impeller blade load torque limits.

Depending on the pump size and impeller geometry, the viscosity limits for the average centrifugal pump will vary from 250 to 700 centipoise, and I have witnessed many pumps successfully pumping fluids in excess of 1000 centipoise. If your application is above 250 centipoise, I recommend you work with your pump manufacturer/vendor to arrive at the answer. The two important points to take into consideration are these:

All pump shafts have a speed, horsepower and torque limit. In the case of single stage pumps many manufacturers will express this as a hp per 100 revolutions per minute (rpm) limit. Note that torque is inversely proportional to horsepower, so the lower the speed the more torque is applied to the shaft.

While most shaft limits are based on speed, hp and continuous torque limits, keep in mind that if the pump is driven by an engine then the limits will be further reduced (internal combustion means intermittent in lieu of continuous torque). Additionally, if the pump shaft is side loaded, as in the case of belt or chain drives, there will be a striking reduction on the shaft limits due to the cyclic bending fatigue factor. 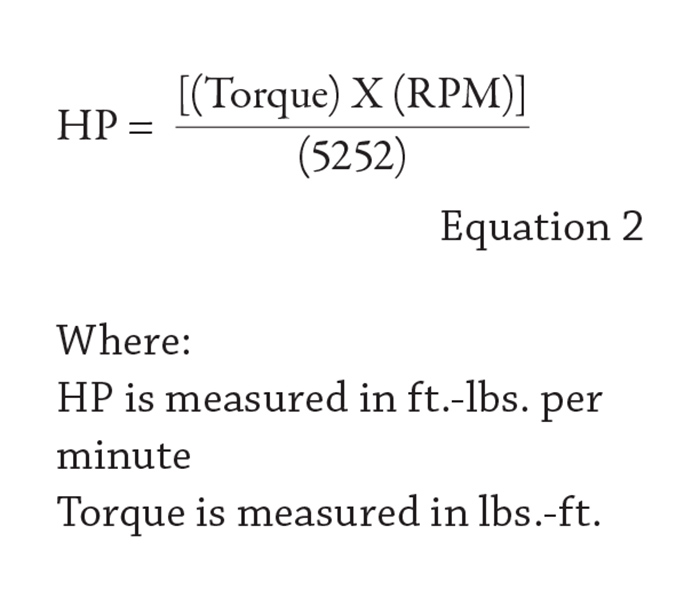 For a given liquid, the viscosity will decrease for an increase in temperature and vice versa. Note that for gases, it is the opposite relationship. For stated viscosities a temperature must also be given, typically 40 and 100 C are standards.

Temperature can be an issue in the field because pumps are frequently sized and sold to pump a viscous liquid at some stated temperature, but then the pumps are actually operated at a lower temperature, which yields a higher viscosity and, of course, a higher required hp with less flow and head than desired or promised.

Pressure effects on a liquid’s viscosity are typically very small and in most cases can be ignored.

Viscosity is frequently mistaken for specific gravity (SG). They are two different things. Common vernacular expressions confuse us, as viscosity is more often than not erroneously referred to as a thickness or weight. Mercury has a high SG (13), but a low viscosity and many lube oils have a low SG (lower than water or less than 1.0) but have a high viscosity.

Specific gravity is used in the equation when we are converting to or from dynamic and kinematic viscosities. Centipoise = (Centistokes) (Specific Gravity)

Always be careful with the affinity rules as they do not take system interaction into consideration. Before applying the rules, convert to the corrected performance for all applicable parameters.

When pumping fluid, the more viscous the liquid the more friction will occur. The resistance (friction) is due to the shear stress properties of the fluid and the wall surface of the pipe/pump. Note that the smother the pump and pipe surfaces/walls are the less effect the viscous fluid friction will have.

See Chapter 3 (Friction) in the Cameron Hydraulic Data Book for more information on this, and the connection to the Darcy Weisbach equation and the Reynolds number. If you are calculating a system head resistance curve and the fluid is viscous you must take that into consideration.

Intuitively, you would think that changes in viscosity will effect NPSHR (aka NPSH3), but most published empirical data disputes that line of thinking. On pump suction line applications where highly viscous fluids have issues flowing in the pipe to the pump suction come to mind, but these issues would normally be covered in the friction component of the NPSHA calculation. That is, the friction factor would be higher for the viscous fluid and consequently reduce the NPSHA. My advice on viscous fluids is to increase the margin between available and required NPSH.

Several well respected (but older) reference books state that there is little to no evidence that viscosity affects the NPSHR (NPSH3) value. The new edition of the ANSI/Hydraulic Institute guideline 9.6.7 states that an analytical approach may be considered (refer to section 9.6.7.5.3 of the guideline). The guide offers an equation to calculate a corrected NPSHR (NPSH3).

To quote one paragraph from this section: “There is a dual influence of the pumped liquid viscosity on NPSH3. With increased viscosity the friction goes up, which results in an increase of NPSH3. At the same time, higher viscosity results in a decrease of air and vapor particle diffusion in the liquid. This slows down the speed of bubble growth and there is also a thermodynamic effect, which leads to some decrease of NPSH3.”

Pump Shut Off Head When Pumping a Viscous Fluid

Does a pump on viscous fluid service still approach the same shutoff head as when pumping water? This question comes up frequently in my work, and I have researched extensively for an answer (but no actual testing). The answer appears to be that at zero flow rate the head developed by the pump is the same for water as it is for a viscous fluid where we assume the viscosity is less than 600 centipoise.

Several of my respected mentors seem to think the same thing. I am open to input if you have data either way. I still would like to believe that a pump of mid- to low-specific speed that is pumping a fluid of mid-range viscosity (approximately 250 centipoise) will not quite make the same head that it would with water. But, I surmise that velocity and gravity will argue with me on that issue.

Centrifugal Pumps Design and Application, VS Lobanoff and RR Ross