What Happens to Power & Efficiency When a Pump Wears Out?

When a pump experiences internal wear, its performance drops. Flow is reduced and efficiency plummets. But what happens to power? Does it drop, stay the same or increase?

The answer to this question depends on how a pump wears internally. In extreme cases, when the impeller is completely worn, there will be no flow and hardly any power. But in many cases, tight clearance parts, such as wear rings and bushings, are the first to wear. 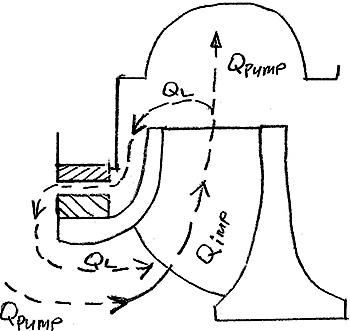 Figure 1. Parallel circuit: Flow through the impeller is greater than the actual pump discharge/suction flow by the amount of leakage. (Graphics courtesy of the author)

Figure 1 shows a flow path through a pump: Flow (Qpump) enters a pump and leaves it. But the flow through the impeller (Qimp) is actually a bit higher as leakage (QL) (returning from the impeller outer diameter [OD] back to suction through the clearance) joins the incoming flow (see Equation 1).

As a result, two hydraulic systems are operating in parallel: the main system (discharge side), which is what the flow meter reads, plus the internal recirculation system, which depends on the wear ring clearance (see Figure 2). The resultant system curve is constructed from the basic rules of system hydraulics: flows added at each head value. This process is the same whether the circuit is external (such as a more classic example of an external bypass line) or internal (leakage), as in this example. 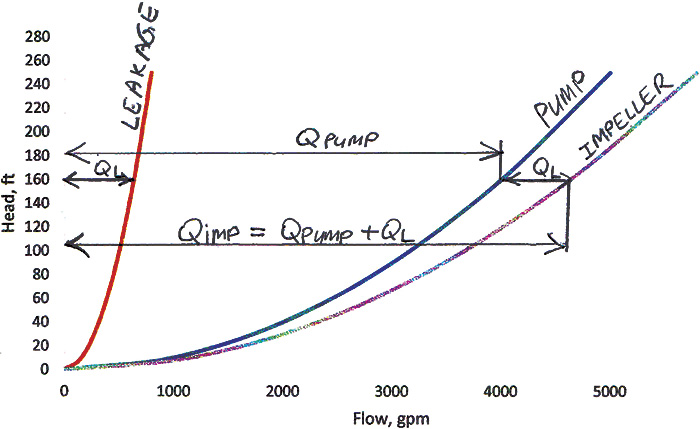 We can now overlay a pump curve over the system(s) curve(s) as shown in Figure 3. Point A (4,100 gallons per minute [gpm], 170 feet) is an intersection of the pump curve and system curve when there is no leakage (theoretically, zero clearance). In other words, the flow through the impeller is the same as the flow entering and exiting the pump.

Point B is the intersection of the pump curve with a “new” system curve when clearance is non-zero. We can see that the flow through the impeller increased to 4,600 gpm (system resistance decreased due to opened clearance), resulting in a reduced new head of 155 feet. Drawing a horizontal line at 155 feet gives us a pump flow of 3,900 gpm and a leakage flow of 700 gpm through the rings.

At the original (zero clearance) operation, the pump was drawing 270 horsepower (hp) at 4,100 gpm (point AP on the power curve). At a new, increased flow (4,600 gpm), the power went up to 285 hp (point BP), reflecting the extra power draw required to recirculate the liquid through the clearance. 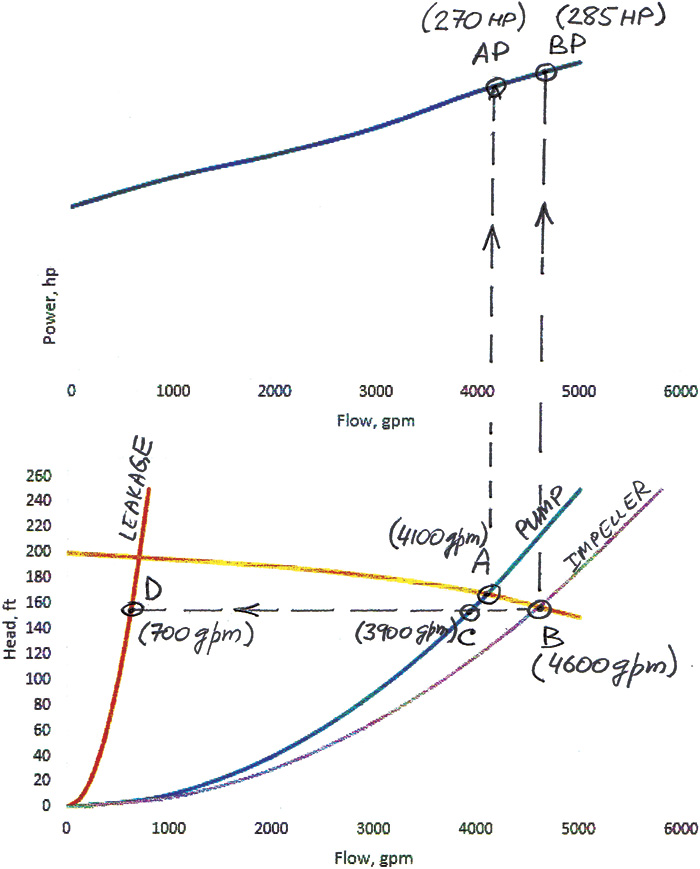 An observer using a flow meter at the piping doesn’t know anything about the internal recirculation. All he or she sees is 3,900 gpm leaving the pump and 285 hp registered by the power readout (assuming zero motor losses for simplicity). As a result, there are two conditions of the pump observed parameters: 4,100 gpm, 170 feet, 270 hp before clearance opened up; and 3,900 gpm, 155 feet, 285 hp after clearance opened up. 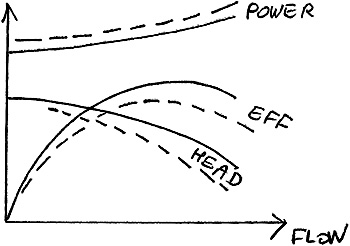 Periodic field testing of pump performance can show the presence of any deterioration of the pump’s internals. Interestingly, the data on power can tell the difference between the types of internal wear—for example, if the wear ring clearances have worn out or if the impeller itself is deteriorating (as might be the case with highly abrasive pumpage or corrosive chemicals).

Coupled with vibration analysis, a performance audit may help users determine the next course of action—whether repair is needed or continuation of operation—by relating the drop in efficiency to the cost of repair to restore performance. There is a way to estimate the drop of efficiency versus clearance value, as shown in previous columns as well as at my periodic sessions of Pump School.

As a parting quiz: What do you think would be the energy cost, in dollars, lost for a large, 2,000-hp double-suction pump when its clearance doubles?

The closest answer will have the chance to be published in the occasional “Readers Respond” section of Pumps & Systems.