What Horsepower Is Your Motor Anyway?

Learn what is really behind the horsepower rating on motors.
by Blake Bailey
designmotors
12/13/2019

A motor’s horsepower (hp) rating is commonly taken as a fixed characteristic. However, there is much to be gained through a better understanding of what goes into a motor’s rating. Often, hp comes up in discussions such as uprating, overloading, and sometimes from service centers that analyze the motor’s windings and theorize that the motor’s hp is different than rated. The hp is typically dictated by driven equipment suppliers to accommodate some speed range and torque requirements, and thus sets the foundation for the motor’s rating. According to motor design choices including temperature rise, insulation class, machine size and enclosure, it will show that the variability for a given motor’s hp rating is likely larger than commonly perceived. Rather than being a fixed value, hp should be seen as something on a “sliding scale” that can be varied based on associated motor parameters and application requirements.

For users in North America, motors and their loads are most often referred to by their hp. Loads require a certain torque within a speed range to perform their work, with many industrial loads having speeds that relate closely to typical motor speeds—i.e., 1,800 rpm. When designing a process, analysis determines how much power is required at the chosen speed, thereby supplying the load its required torque. However, upon inspection of operating characteristics for driven equipment, it is often found that motor hp exceeds the actual load requirements. This follows the logic that the motor should always be sized with greater power than its load requires to guarantee reliable operation. While reasonable, in many applications this leads to oversized motors that operate within an inefficient range. Additionally, overload conditions are almost universally accounted for with a motor’s service factor (sf), providing even more operating margin for the motor (although National Electrical Manufacturers Association [NEMA] MG1 states reduced life should be expected for continuous operation in this range). Therefore, even at the start of choosing motor ratings, the base hp and speed of a motor are values that must be balanced.

Rated temperature rise and insulation class are critical in the sizing and rating of any industrial motor. As machines that convert electrical power into mechanical power with inherent inefficiencies, motors produce heat resulting from their losses. For induction motors, this heat results from four of the five inherent losses (stator resistance loss [I2R], rotor I2R, stray load and core losses), with the bulk of the losses being dependent on the motor’s current draw (and, correspondingly, load). Therefore, as motor load increases, the motor’s internal losses will also increase, thereby leading to an increase in heat generation.

Relevant to the temperatures motors reach internally are the properties of the electrical insulation, which ensures that voltage is isolated between phases, as well as from ground. Along with their dielectric properties, insulating materials have thermal limits that greatly affect their useful life, meaning that a motor’s safe operating temperature range is limited by its insulating materials. For modern motors, common insulation total temperature limits are 155 C (311 F, Class F) and 180 C (356 F, Class H), with vintage machines sometimes having Class B (85 C or 185 F) insulation systems. These limits must account for both the ambient temperature (typically 40 C or 104 F) and expected temperature rise of the motor for continuous operation. For example, a motor rated for an 85 C or 185 F temperature rise at its 1.15 sf with a 40 C (104 F) ambient temperature is expected to operate with a 125 C (247 F) total temperature. It would be inappropriate here to use Class B insulation, but either Class F or H materials would be suitable.

From the preceding points, it should be clear that if a motor can withstand higher temperatures, more internally generated heat can be tolerated. This allows for higher losses, thereby permitting an hp increase. 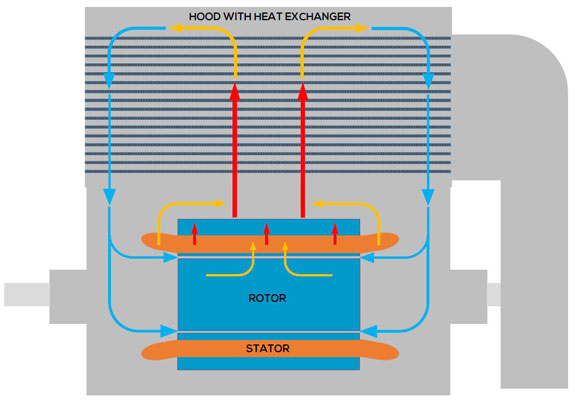 The relationship between motor size, enclosure and rated power is related to temperature rise. For the removal of internal heat, motors rely on both convective and conductive cooling paths (see Image 1). As an example, a motor’s stator windings generally will produce the most heat and this heat relies on multiple paths to exit the motor. These paths through the motor and its enclosure include conduction from the stator copper to the stator core, conduction from the core to the motor’s frame or convection via cool air flow around the core and coil extensions, exiting the machine through paths dictated by its enclosure. By a designer increasing machine size, the area through which conductive and convective cooling takes place is also increased. For a given rating, this increased cooling capacity naturally results in lower temperatures. Thus, motor heating also depends directly on motor size. 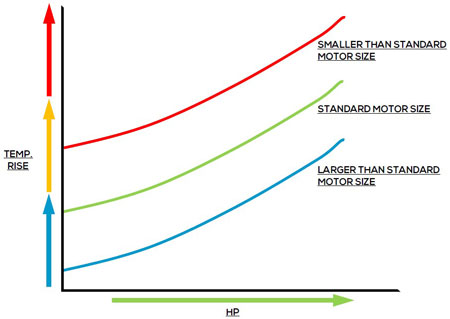 Although the main purpose of a motor’s enclosure is to protect its internal components, it is also important for the motor’s cooling, as enclosures dictate the paths for the machine’s conductive and convective cooling. In general, motors are either open enclosures, which exchange air with the motor’s surroundings (i.e., open drip proof [ODP] and weather protected-II [WP-II]); while others are of the enclosed type, which do not exchange air with the motor’s surroundings (i.e., totally enclosed fan cooled [TEFC] and totally enclosed air-to-air cooled [TEAAC], noting that water-cooled enclosures cool more effectively). Because the temperature of the ambient air surrounding a motor will usually be lower than the motor’s internally circulating air, motors with an open enclosure have a greater capacity for removing heat when compared to enclosed machines for a given rating. If a comparison is made between the same hp motor in an open enclosure with a totally enclosed model, the open machine almost universally exhibits a smaller size. Consider that, although to varying degrees between manufacturers, TEAAC motors are generally approximately 15 percent larger than the same rating in an open enclosure. Because of these points, the level of protection sought for a motor should always be balanced against the machine’s overall size (and, correspondingly, its cost), as both machine size and enclosure have direct impacts on the hp and temperature rise ratings of machines. Image 2 illustrates the theoretical relationship between hp, temperature rise and machine size for a given rating.

Other Considerations for a Motor’s Rating

While the items discussed so far are primary in properly choosing a motor rating, there are several other criteria that have noteworthy impacts. Common additional considerations to make are installation fit-up, unusual transient torque or current requirements, operation across wide speed ranges, and under voltage or stalled operation considerations.

Additionally, mechanical considerations including shaft material/sizing, mounting bolt material/sizing, bearing type/loading, and cooling air availability must also be accounted for. Variations in any of these categories outside of what is considered typical can have substantial effects on a motor’s rating, size, cost and availability.

For examples of the preceding points, consider three motor ratings illustrating that the “same motor” can show up in very different ways. For illustration’s sake, these three ratings are shown through a theoretical “motor configurator” in Image 3. First, consider a 1,500 hp, 900 rpm, 4,000 volt (V), 85 C (185 F) rise at full load, 40 C (104 F) ambient, TEAAC induction motor compared to a motor with an identical stator, rotor and enclosure; except with a 1,600 hp rating. Image 3 illustrates expected performance for this rating in addition to a 1,300-hp version, keeping in mind that the only difference between configurations is rated hp and resulting performance. Image 3 shows that the “same motor” with a different hp alone will provide different per unit performance characteristics and temperature rise. By paying attention to items unrelated to rated hp, such as locked rotor amps and safe stall time, one can tell that the stator and rotor designs are identical, with only a different nameplate and hp. Other items, such as the locked rotor and breakdown torques, are changed simply by the ratio of the original hp to the revised hp.

Second, consider the case where the 1,500-hp motor has its temperature rise and enclosure held constant but the machine size is allowed to change for the new hp rating. Image 3 illustrates expected performance for a physically larger 1,600-hp rating, keeping in mind that the difference compared to the original rating is machine size and hp alone. As shown, comparing these two arrangements, the increased hp in a larger size is able to provide the same temperature rise. Because the motors have physically different stator and rotor assemblies, some of the other performance points, including locked rotor amps and safe stall time do change, along with a notable increase in total weight. For reference, Image 3 also shows this arrangement compared to the other modifications of the base 1,500-hp configuration.

By considering the motor as a system of interdependent design variables, it is evident that hp is actually a value that represents the balance of several choices. Variations in a motor’s rated speed, voltage, temperature rise, size, enclosure or other characteristics can all be used in the design or redesign processes to provide different nameplate ratings than otherwise thought possible. With this knowledge in hand, those who work with industrial electric motors should be able to more readily narrow in on the actual motor rating they need and understand what their motor rating does and does not tell them about their machine.