Which Process Pump Should I Use, ANSI or API? | Pumps & Systems Skip to main content

Which Process Pump Should I Use, ANSI or API?

Over the last few months, my training schedule has taken me to a number of different plants that use both API pumps and ANSI pumps. It became apparent that, in a few cases, there seemed to be some confusion regarding the differences between these two process pump styles. This was causing users to purchase the less expensive ANSI pump when, in fact, the service really needed an API pump.

So let’s get practical. What’s the difference?

The ANSI pump is designed and built to the dimensional standards of the American National Standards Institute. Over the years, the ANSI pump has become the preferred style of end suction pumps, not only for chemical process applications, but also for water and other less aggressive services. The Standard provides for dimensional interchangeability of pumps from one manufacturer to another.

On the other hand, the API pump meets the requirements of the American Petroleum Institute Standard 610 for General Refinery Service. This style is almost the exclusive choice for applications in the oil refinery industry, where it handles higher temperature and pressure applications of a more aggressive nature that are common in the refineries.

In both the chemical and petrochemical industries, many of the liquids being pumped require more consideration than merely environmental damage and pumping efficiency and reliability. It is necessary to consider the aspect of personal safety. Therefore, the choice between the ANSI pump and the API pump must take into account the specific fluid properties as well as the operating conditions.

One of the main differences between these choices is predominantly a result of the differences in casing design ratings which are as follows:

In view of these figures, it is apparent that the API pumps should be considered for higher pressure and temperature services than the lighter duty ANSI pump.

Both styles are of a single stage design with a radially split casing to accommodate a back pullout arrangement for ease of maintenance.

Most ANSI pumps, and some API pumps, employ a single volute design in the interior passages of the casing. This is particularly evident in the smaller sizes that involve low flow rates and lower specific speeds of the impeller.

As shown in Figure 1, the area of the volute increases at a rate that is proportional to the rate of discharge from the impeller, thus producing a constant velocity at the periphery of the impeller. This velocity energy is then changed into pressure energy by the time the fluid enters the discharge nozzle. 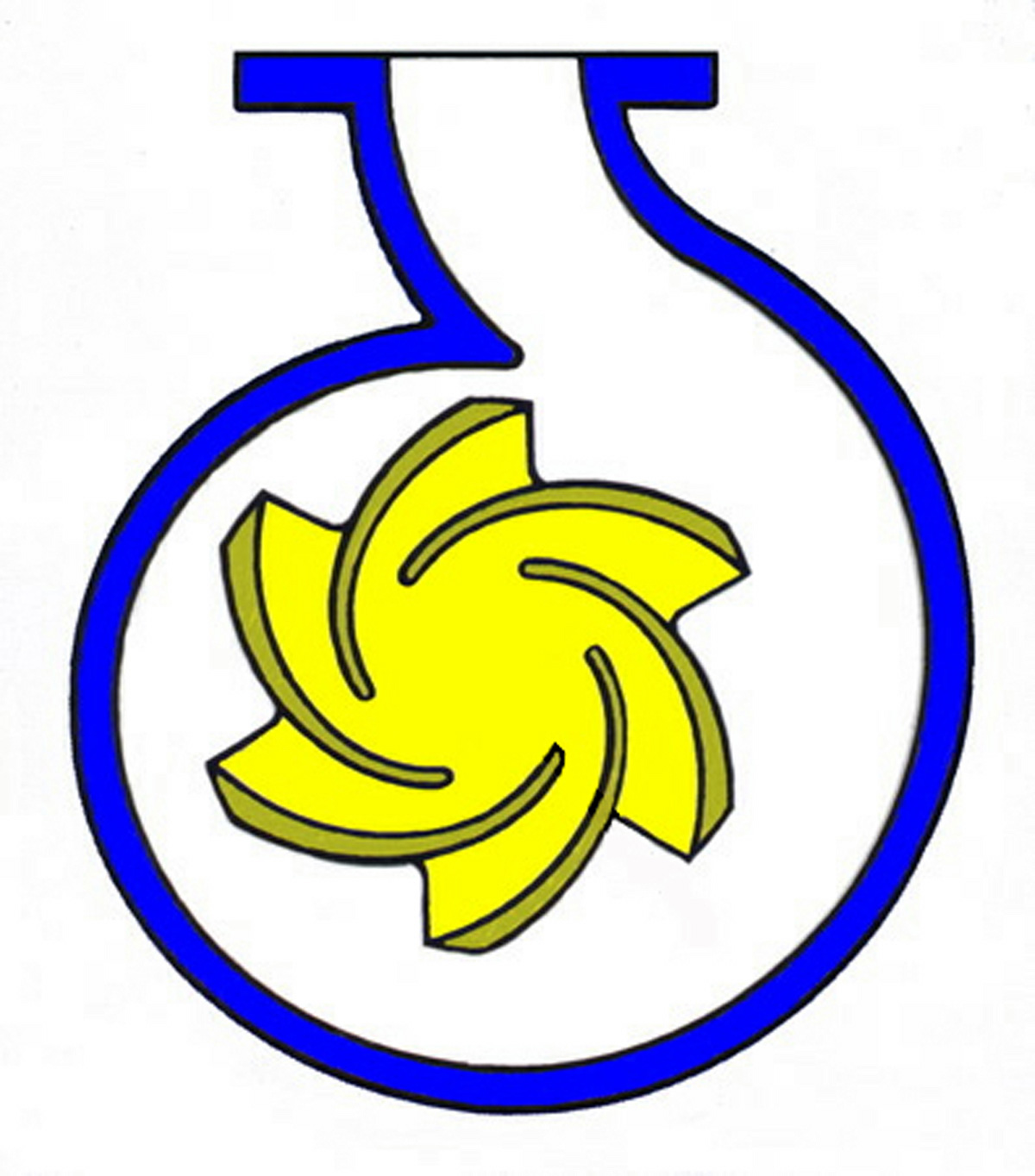 The peculiar shape of the volute also produces an uneven pressure distribution around the impeller which, in turn, results in an imbalance of the thrust loads around the impeller and at right angles to the shaft. This load must be accommodated by the shaft and bearings, and much has been discussed on this problem in recent years.

This load is at its maximum when the pump is run at the shutoff condition, and gradually decreases as the flow rate approaches the B.E.P. If the pump operates beyond the B.E.P., the load increases again, but in the opposite direction on the same plane. Examination of the resultant shaft deflection problems has indicated that the radial plane on which the out of balance load acts is approximately 60-deg counterclockwise from the cut-water of the volute.

Most of the larger API pumps are produced with a double volute design to reduce these loads on high flow and high head units. This is accomplished by balancing the opposing out-of-balance loads from each volute. While the cost of this is a slight reduction in efficiency, it is considered a small price to pay for the increased reliability that ensues.

Another casing feature found in many API pumps is the top suction/top discharge arrangement, where the suction nozzle is located at the top of the casing adjacent to the discharge nozzle, rather than on the end. The drawback of this design is that, for most of these pumps, the NPSH required is usually greater than in the end suction arrangement in order to accommodate the friction losses in the tortuous path from the suction flange to the eye of the impeller.

One of the major differences between the ANSI and API pump casings is in the manner in which the back cover is secured to the casing. 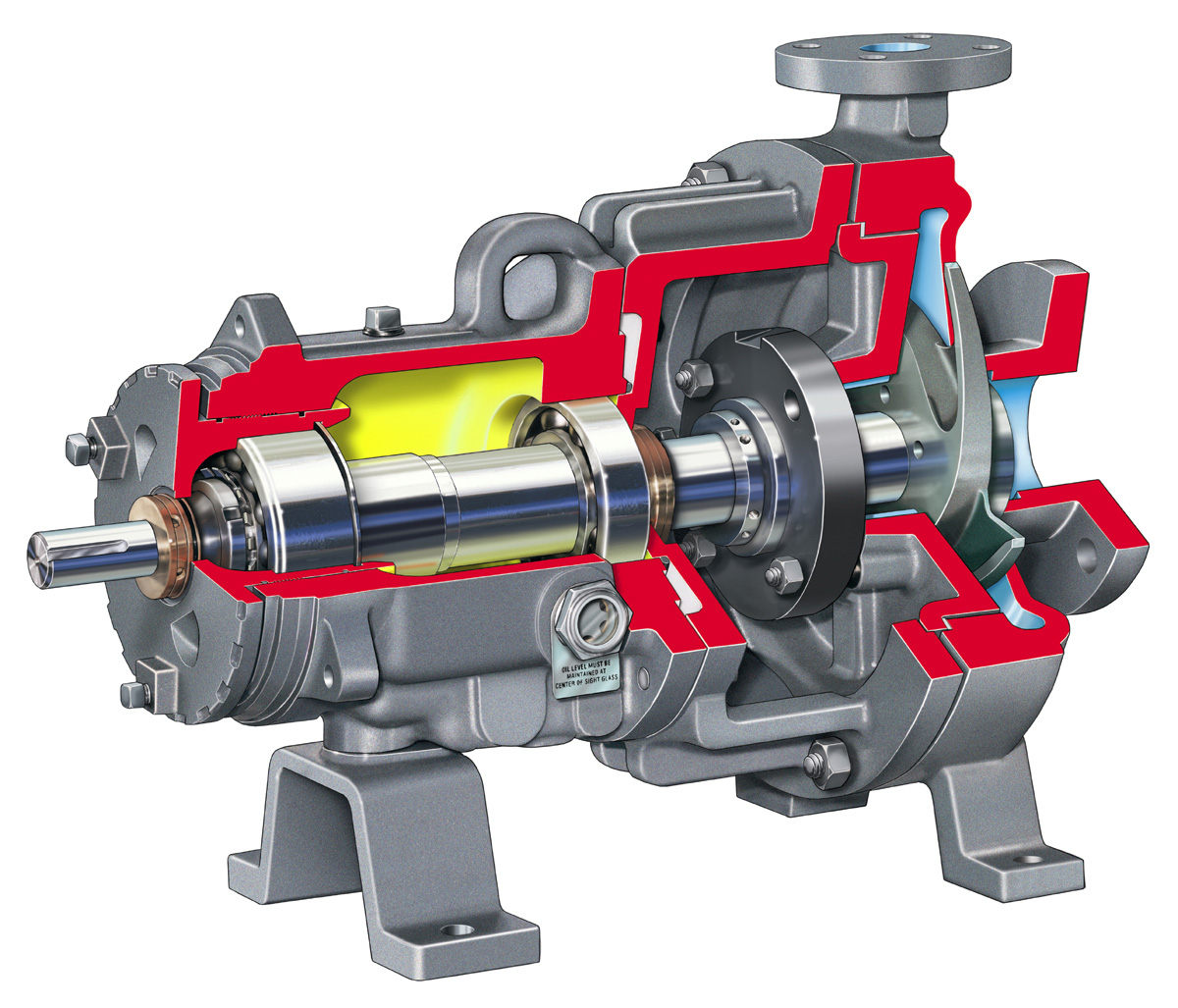 In the ANSI design shown in Figure 3, the back cover and gasket is held against the pump casing by the bearing frame adaptor, which is most frequently supplied in cast iron. This usually results in a gap between the mating faces of the frame adaptor and the pump casing that has the potential to permit uneven torquing of the bolts. This may cause a fracture of the adaptor in the event of a higher than normal pressurization of the casing by the process system. 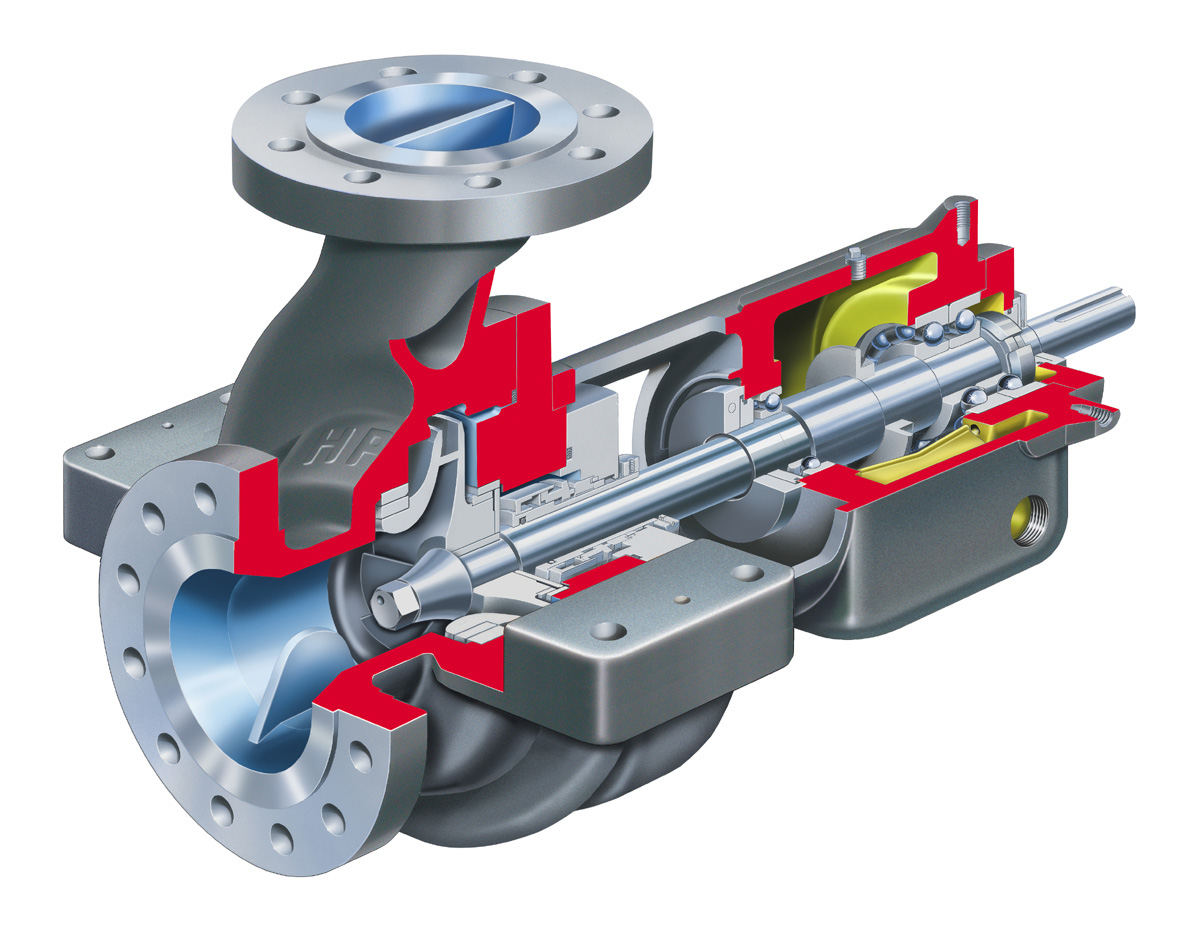 The API design in Figure 4 bolts the back cover directly to the casing and uses a confined, controlled compression gasket with metal to metal fits. The adaptor is bolted independently to the back cover and does not play a part in the pressure boundary of the pump casing.

Another difference between the two pump styles is the configuration of the mounting feet. All ANSI pump casings are mounted on feet projecting from the underside of the casing and bolted to the baseplate. If these pumps are used on high temperature applications, the casing will expand upwards from the mounting feet and cause severe thermal stresses in the casing which will detrimentally affect the reliability of the pump. Operation at lower temperatures will not be affected by this feature.

On the other hand, API pumps are mounted at the horizontal centerline of the casing on feet projecting from each side of the casing and bolted to pedestals which form part of the baseplate. This arrangement provides the API pump with the advantage of being able to operate with pumpage at elevated temperatures. As the pump comes up to temperature in such cases, any expansion of the metal will be above and below the casing centerline and will exert minimal amounts of stress to the casing, thus contributing to the optimum reliability of the pump.

The ability to handle higher temperature services is also evident in the bearing housings of the API pumps, which tend to be much more robust in design and also accommodate cooling jackets with a greater capacity of cooling water.

Let’s get practical. By keeping these factors in mind during the selection process, you can finish up with the correct pump design that has been properly selected to provide a profitable and reliable operating system.

Ross Mackay specializes in helping companies increase their pump reliability and reduce operating and maintenance costs through pump reliability training programs. This article is extracted from his book “The Practical Pumping Handbook.” Ross can be reached at 1-800-465-6260 or through his web site, www.practicalpumping.com.