Why Does the Pump Shaft Keep Breaking? | Pumps & Systems Skip to main content

Why Does the Pump Shaft Keep Breaking?

It seems that most pump owners/operators immediately blame the manufacturer if the pump shaft breaks. Yet in most cases, it is not the manufacturers’ fault. This article explores the issue and the potential causes. While many of these points are specific to centrifugal pumps, several apply to all rotating machinery, including turbines, compressors and motors.

Credible pump manufacturers design their machine shafts for normal startup and operational factors, but some have higher margins for upset conditions and safety margins (think torque). The main reason that shafts break can often be traced to operational and system reasons.

Fatigue failure (also known as failure due to reversed bending fatigue with rotation) is the most common cause of pump shaft fractures/failures.

The shaft’s purpose is to transmit the rotational motion and power (torque) from the driver to the pump shaft components, mainly the impeller(s). The basic shaft design will address torque as the primary dynamic because torque is the most important design element (speed and power are integral factors of torque).

Additionally, the axial placement (location) of major shaft components such as the impeller and coupling, as well as resulting rotor dynamics such as critical speed, are major factors in the equation for a reliable shaft.

All good initial shaft designs include a bending moment diagram and a modal analysis. This article does not address large and high-horsepower multistage pump shafts where design parameters include decisions whether to design for wet or dry running and rotor stiffness.

Many pump users erroneously blame the shaft material selection when the shaft breaks, thinking they require a stronger shaft. But choosing this “stronger must be better” path often treats the symptom rather than the problem. The shaft failure issue may occur less frequently, but the root cause remains.

A small percentage of pump shafts will fail because of metallurgical and manufacturing process issues such as undetected porosity in the base stock, improper annealing and/or other process treatments. Some fail due to improper machining, such as incorrect dimensions, tool drag, sharp radii, omission of and/or improper grinding and polishing. An even smaller portion fail because of inadequate design margins to allow for torque, fatigue and corrosion.

One other factor that can arguably be blamed on either the manufacturer or the user is the amount of cantilever in overhung pumps, known simply as the shaft’s L-over-D ratio (stated as L3 ÷ D4 or L3/D4, where L is the axial distance from the impeller centerline to the center of the radial bearing and D is the shaft’s diameter).

Also called the “slenderness ratio” or “shaft stiffness ratio,” it is an indication of how much the shaft will deflect (bend) due to radial hydraulic forces when the pump is operating away from the design point (best efficiency point, or BEP). 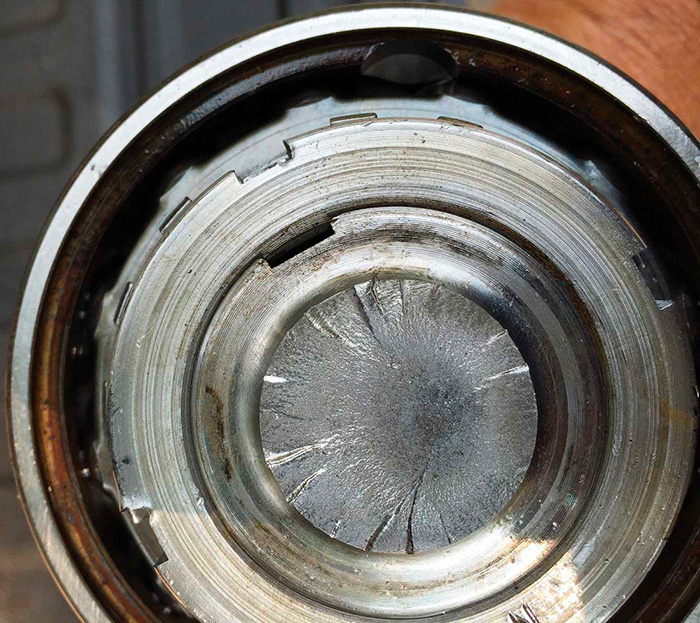 Image 1. This ANSI pump shaft was improperly loaded by a belt and sheave arrangement that resulted in rotating bending failure. Note the multiple (minimum of 15) fracture origins on the periphery. The darker area near the middle of the shaft is the instantaneous fast fracture zone. (Courtesy of the author)

Young’s modulus should not be confused with strength, toughness or hardness. Since the most common shaft materials all have a similar Young’s modulus, the decision to change materials is rarely the single solution to correcting the root cause of shaft failure. End users will experience higher reliability by addressing the other operational factors.

The most common cause of shaft breakage is (rotational) tensile bending fatigue. These fracture types are a result of the bending stresses previously mentioned. For a given material, the number of cycles and, to some degree, the periodicity (frequency) and the distance (strain or amplitude) of the bending cycle will determine how long the shaft will remain as one piece. The fault initiates at the weakest point, which is typically a radius, fillet or keyway. The fault may also occur at a bending moment point.

For the most common pump shaft materials, the fractures from bending stresses will occur at right angles (90 degrees) to the shaft centerline, so these failures appear almost as if the shaft snapped off or was cut off at that failure point.

A less frequent mode of failure is fatigue from torsional stresses where the fracture occurs at a 45-degree angle to the shaft centerline. Torsional failures have increased with the advent of variable speed devices.