The project includes initiatives and first-of-its-kind technology that move the plant toward energy independence.
by Gerhard Forstner
09/14/2016

Image 1. Pumps and heat exchanger linked to the reactor as part of the process to capture and transfer methane for reuse as biogas. (Images courtesy of CNP Technology Water and Biosolids Corporation)

Few wastewater treatment plants are as forward-thinking as the one operated by the Kenosha Water Utility in Kenosha, Wisconsin, which sets the bar for treatment facilities looking to run as efficiently as possible for the benefit of their operations and the residents they serve.

A prime example is the Kenosha Wastewater Facility’s Energy-Optimized Resource Recovery Project, which was announced in 2015.

The sizeable project includes a range of initiatives and first-of-its-kind technology designed to help the treatment plant achieve higher efficiencies and move toward its ultimate goal of energy independence.

The electricity produced by the CHP units powers the entire biosolids process—everything from thickening to hydrolysis, through digestion, dewatering and drying—in addition to other processes such as the blowers for aeration and pumps in the headworks.

The CHPs also produce an adequate amount of heat to facilitate the hydrolysis process, biosolids drying and other processes that consume thermal energy.

The result is an anticipated $200,000 annual electric power savings in addition to other cost-saving advantages.

Also key to the partnership is the company that designed and implemented individual technologies that ensure overall success as part of the biosolids-handling system process.

Both thickeners create a higher solids concentration (or lower liquids concentration). The thicker concentration of solids, in turn, allows the plant to operate fewer anaerobic digestion tanks, which lessens the need for thermal and electrical energy.

The challenge with waste-activated sludge is that it is not readily digestible because of a more complex cell structure than primary sludge.

To tackle this, the plant incorporated a thermo-chemical hydrolysis process. This system leverages thermal energy and sodium hydroxide to break down the cell walls of the microorganisms in waste-activated sludge. This renders the sludge more digestible by anaerobic digesters, which produces additional methane from waste-activated sludge that would otherwise be unattainable. The system operates at a much lower temperature, so less heat is needed for the process and the heat transfer is much simpler.

Another advantage is that all the thermal energy necessary to facilitate the hydrolysis process is transferred into the anaerobic digester, maximizing the system’s thermal efficiency.

The additional methane allows for more electricity and heat production with the treatment plant’s two combined heat and power units.

Following the hydrolysis process, the waste-activated sludge is blended with the thickened primary sludge before it is transferred to the system’s anaerobic digesters.

The combined heat and power-generated thermal energy supplies heat to the thermo-chemical hydrolysis system and the plant’s belt dryer.

The plant is able to dry the biosolids to more than 90 percent solids concentration, minimizing the volume of biosolids to be disposed of while also achieving Class A Biosolids that can be used for beneficial purposes rather than stored in a landfill.

The heat generated in the process is also used for the anaerobic digesters and central plant-heating loop, further lowering energy costs.

The combined heat and power units each produce 330 kilowatts of continuous power—enough to power all equipment in the process as well as provide supplemental power to the rest of the plant. 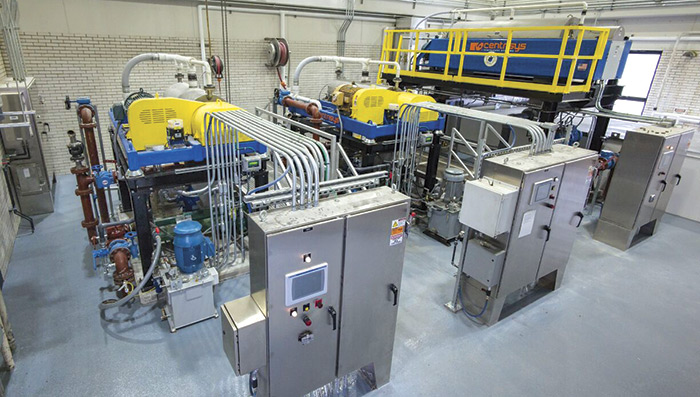 Image 2. The centrifuge room at the Kenosha Wastewater Treatment Plant. Pictured are the plant’s three centrifuges including a pair of thickeners for primary sludge and waste-activated sludge, and a dewatering centrifuge.

While the thermo-chemical hydrolysis system and the combined heat and power units are vital to the energy initiative, a number of other systems make up the synergistic approach that allows the treatment plant to reach its goals.

These other systems include the following:

On Track for Continued Success

“When we decided to overhaul our sludge treatment process, one of the most important factors in the decision to implement each individual technology was the process as a whole could not be overly complicated,” said Melissa Arnot, P.E., director of operations at the Kenosha Water Utility.

“Typically, plants will only implement one piece of equipment at a time. We decided it was in our best interest economically to do it all at once. Each piece of equipment relies on another for its energy source and use of its byproduct. Implementing some but not all of them would have taken away from the overall project goal.

“The design-build approach allowed us to make changes along the way that made the overall system more user friendly. We are in the optimization phase currently and are excited with the results we are seeing,” Arnot said.

The Kenosha Wastewater Facility’s Energy-Optimized Resource Recovery Project is expected to be optimized by the end of 2016.

From there, plant officials and technology partners will continue to refine and enhance the systems that work synergistically.

These strategic efforts and initiatives will set an important example for wastewater treatment plant efficiencies and energy conservation.

Gerhard Forstner is president of CNP Technology Water and Biosolids Corporation. He leads CNP in its phosphorus recovery and thermo-chemical hydrolysis initiatives, which include North America’s first installation of the PONDUS Thermo-Chemical Hydrolysis Process at Kenosha in partnership with Centrisys. He holds a degree in electrical engineering and an MBA from Queens University in Charlotte, North Carolina.