Calculating NPSHa When the Liquid Is Above Ambient Temperature

In the first part of this five-part series, we defined net positive suction head available (NPSHa) and walked through a simple calculation based on ambient temperature water for a flooded suction condition. In part two, we worked through an almost identical situation except the water source was at a level below the pump centerline, which is a suction lift situation. In both cases, the systems were open to atmospheric pressure, located at the elevation of sea level. The liquid temperature was at ambient 68 F.

In this third part of the series, we will investigate what happens when the liquid temperature is above ambient. Before we get to the formula and the calculation, I recommend a review of the definition for vapor pressure. I covered vapor pressure in my April 2018 Pumps & Systems column should you wish to revisit. A brief summary is as follows.

A liquid in an open container will eventually evaporate to a vapor unless some other force is present to prevent the change from occurring. In most examples, that force is simply atmospheric pressure. Even a bowl of water left on the kitchen counter will evaporate away over time, but it will happen at a significantly faster rate with each incremental increase in temperature. The amount of energy associated with the vapor pressure is subtracted from the total energy level available for the NPSHa. The energy associated with the vapor pressure is always a negative quantity. In the context of NPSHa, vapor pressure is not a friend to the pump.

Vapor pressures for water at various temperatures are easy to calculate or obtain in a reference source, but it is often very difficult to find reliable information on vapor pressures for other liquids. It is not uncommon for the end user/operator to be using the incorrect vapor pressure in their calculations.

The Formula for NPSHa

Remember that we are calculating NPSHa, so we do not need to include velocity head. Velocity head would be included if we were measuring NPSHa. Please refer to Image 1. 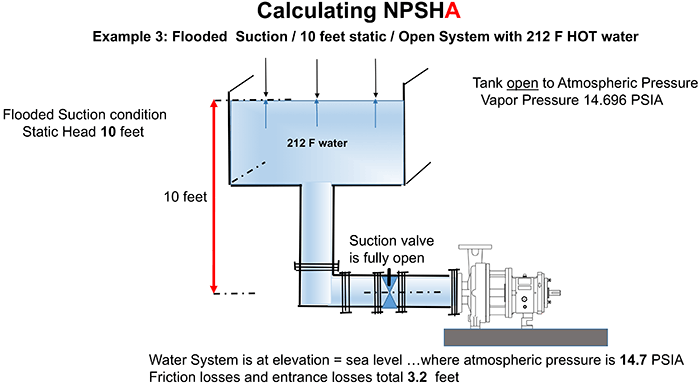 The water level is 10 feet (hst) above the pump centerline, and let us assume the water level will remain at that height for this example. We will assume the supply rate is the same as the demand rate. In a real world situation, you must calculate NPSHa based on the expected worst-case scenario. For example, the application could be a batch process where the tank will be nearly empty at some point. 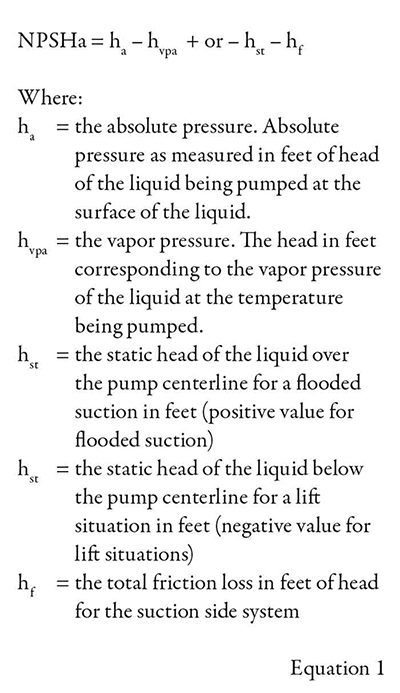 For ease in working the example, I have calculated the total friction losses (hf) as 3.2 feet. Note that friction losses are technically lower for hot water than cold, but we will ignore the small difference for the examples in this series.

In real life examples, the actual atmospheric pressure will be slightly lower and vary with weather/barometric pressure and elevation above or below sea level.

Standard pressure at sea level may also be listed as 14.696 psia in lieu of 14.7. Either way, it rounds off to 14.7 psia. The more important fact is to know the actual elevation for the pump location and adjust your calculations accordingly.

The difference between this third example and the first example (see part one of this series, Pumps & Systems, July 2018) is that now the water temperature has been increased from 68 F to 212 F. Both examples are a flooded suction and an open system. Vapor pressure for 212 F water can be obtained from a reference text. Vapor pressure is normally expressed in units of psia, which must then be converted to feet (“for the liquid being pumped”) for use in the previous equation. The vapor pressure for water at 212 F is 14.696 psia. When converted to feet, this will round off to 35 feet.

Many sales engineers, pump technicians and operators will work for years in the pump application world and will have no pump suction side issues with NPSHa until that first time they encounter an application involving hot liquids (higher vapor pressures), where the previous “forgiving adequacy” of 34 feet NPSHa margin was just “mysteriously stolen” from them by the thief that is vapor pressure. A similar scenario plays out when people who have always worked with applications involving flooded suctions are instead confronted by a project with a lift or a vacuum on the suction side.

To continue the full calculation for this example, the head due to static height (hst) is positive because it is a flooded suction above the pump centerline.

The situation illustrated in this article where the vapor pressure cancels out the absolute pressure is very common in the industry because many processes are designed to operate at or near equilibrium for maximum efficiency. The only system design aspect working for your pump application in a positive way remains the static head (hst). This is why you see so many elevated tanks in chemical plants and refineries and is also why condensate pumps are always in the lowest level of the steam plant.