There are two types of pumps presently available—on-off controlled pumps and variable speed pumps. The budget will quickly determine which of these two is chosen.

It is important to be educated about the differences between the two technologies and then make the choice based on cost, performance and reliability.

These pumps incorporate some type of pressure switch, bladder tank and flow switch. Their major benefit is their low cost. They also have some drawbacks. The pump cycles on and off, and although there are some devices that lower this cycling, ultimately the pressure is rarely spot on. Instead it will deviate from the on and off pressures.

Therefore, a bladder tank is needed because, without it, the pressure spikes and dips could damage pipes and the pressure tank smooths out the low- and high-pressure deviations when the pump turns on and off.

The pump has two speeds: full speed or stopped. There is no variable speed in an on-off pump. Cycling prematurely can wear pump seals and bearings and can stress the motor’s winding because the motor draws up to seven times the full load current rating as it starts across the line at full voltage. This heats the motor and can lead to failure if started too frequently.

As mentioned previously, a bladder tank is needed. If the pressure is not set properly, the tank will saturate or will cause the pressure switch to bounce if set too high. Bladder tanks should be checked twice a year to ensure they are not leaking and still functioning.

A flow switch is a mechanical device that determines if water is moving through the pump. Without a flow switch or some other means to determine if water is present, the pump may be operating without moving water, causing it to heat to the point that it damages the pumps’ seals. Flow switches can struggle with clogging. If a magnetic pinwheel is incorporated, minerals and other contaminate in the water eventually stops it from working.

The pressure switch has mechanical contacts that eventually wear or burn out. Welded contacts could make the pump run until it burns out or—if no pressure relief is incorporated—blow pipes.

On-off pumps cannot modulate to maintain pressure, so some manufacturers use a pressure reducing valve. This device limits the pressure to prevent pipe damage and excessively high pressures. If these devices fail, it could cause a catastrophic pipe break.

Reducing valves are like driving a car with one foot on the gas while modulating the car’s speed with the brake. It results in wasted energy.

Often the difference in energy savings over several years will pay for the pump itself when comparing this technology to variable speed.

The difference is so dramatic that commercial pumps over a certain horsepower (hp) have been mandated by government regulation to require the use of variable speed control. 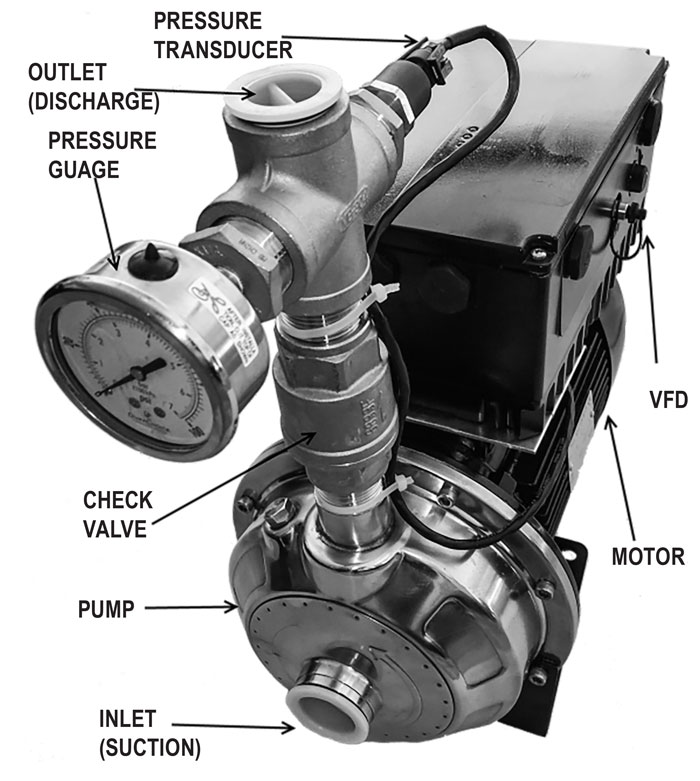 Variable speed pumps incorporate some sort of electronic device, typically a variable frequency drive (VFD). This technology offers the chance to tightly modulate the pressure, but it is also more costly.

VFDs can also be unreliable when they are improperly applied, but properly designed systems should last for 15 to 25 years. A sun shield should be included if the drive is to be mounted outdoors to prevent the sun from overheating the drive. The shield should use an aluminum casing rather than plastic, and it should be painted black.

The color black spreads the internally generated heat more evenly across the drive’s interior surface than any other color. Plastic “hot spots” cause heat pockets in the drive.

In addition to reliability, a VFD provides performance with technology like predictive proportional, integral and derivative (PID) and no flow algorithms. Even VFDs that use PID algorithms typically do not use the derivative component. The proportional part of the algorithm looks at the set point pressure and the actual pressure coming in from a pressure transducer and outputs the error signal. The higher the error, the more compensation is output to the drive to have the pump reach set point as fast as possible.

This has its own problems. Too high a gain causes oscillation, and too low takes the pump too long to get to set pressure. Most PID have a set gain and do not compensate for rate of change to optimize their response. The integral component smooths out the spikes as the drive responds to demand changes.

Totally ignoring the “D” component compromises how fast the VFD can respond to sudden demand changes that forces it off set point pressure.

Predictive PID looks at the set point pressure, the present pressure and the rate and direction of change and changes the PID gains. This effectively predicts what speed the pump needs to run for a given demand, assuming the water supply can keep up with this demand.

Cavitation occurs when the water supply cannot keep up with demand. This starves the pump and turns the water into a vacuum on the suction side of the pump. When this vacuum reaches the discharge side of the pump, it quickly turns back into a liquid causing a “popcorn maker” sound.

Cavitation is destructive to a pump and will destroy the impeller over time, causing small pits in it. Some VFDs automatically detect cavitation and adjust the pressure to the point that the cavitation stops. Once the demand decreases to keep up with the supply, the pressure is returned, preventing damage or nuisance trip offs.

Another problem is running a pump with no flow. This will heat up the pump and damage it within hours. A good no-flow algorithm is not only accurate but adaptable to different head and suction pressures. Since new ideas are proven and tested, there is always room for improvement in a VFD controlled pump.

On-off controlled pumps do not have the ability to change the pump’s response based on advanced algorithms as previously discussed.

Having a VFD should not be complicated. The end user should not be forced to learn drive parameters and constantly program the drive to get satisfactory performance. A good VFD design incorporates no keypad. A simple pressure knob is all that is needed.

Finally, VFDs should be serviceable. An end user should expect a warranty of a minimum of three years, which shows the manufacturer’s confidence.

One component in any pump will eventually fail: the pump seal. How often the seal fails depends on how much the pump runs and how it is controlled. A pump seal has a typical three- to five-year service life. Before choosing a pump, look at how easy the pump seal is to replace and its cost. Some require purchase of a new pump.

The check valve should also be serviceable, with the ability to take it out, take it apart and clean it, replace the seal if necessary and put it back in service. Note if the check valve is internal and sealed inside the pump. External check valves are preferred.

In conclusion, the pump should be totally serviceable providing a lifetime of service without needing to replace the entire unit.

VFD Features to Look For