Diaphragms in pumps and valves isolate liquid from mechanical components. Diaphragm pumps and valves work well in applications with pressures that cause recirculation in centrifugal pumps and excessive wear in positive displacement pumps and valves. Evidence suggests that the orientation of the diaphragm—horizontal or vertical—makes a significant difference to its effectiveness.

Diaphragms in slurries moving at less than 150 gallons per minute (gpm) and pumps with pressures above 50 pounds per square inch (psi) can have high failure rates. If the specific gravity of the solids is considerably greater than that of the carrier liquid, the failure rate increases because of the quick settling of the slurry in the diaphragm chambers.

Vertical double diaphragm pumps often have high failure rates and downtime on applications involving slurries that consist of solids and hard particles. The vertically oriented diaphragms tend to fail because of diaphragm and suction ball problems. The solids settle quickly in the suction manifold and valve. They also settle in the lower areas of the diaphragm, clogging the valve and rupturing the diaphragm at the lowest point of the valve or pump. 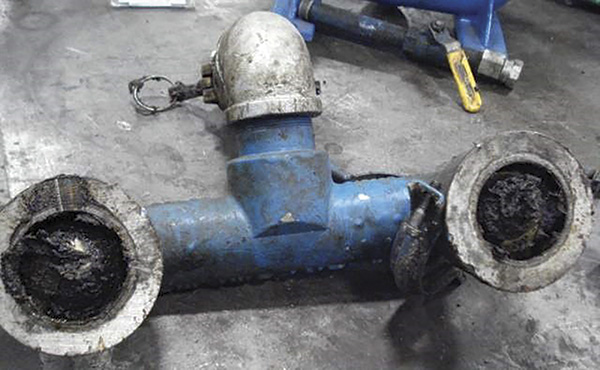 The configuration of a horizontal diaphragm allows the solids to fall away from the diaphragm and valves. The slurry is unable to build up at the bottom of the pump, and the clogging and diaphragm failures associated with vertical configured pumps are eliminated.

The solids do not impinge on any part of the diaphragm. Because the diaphragm is above the solids, they are unable to settle on it. It is inherently protected from the slurry. These diaphragms will outlast vertical diaphragms and be more reliable, especially in applications with heavy slurries.

Single horizontal diaphragm styles tend to be larger and operate at lower cycle rates. Slower cycles reduce diaphragm stresses and extend pump life. The combination of the lack of manifold at the bottom of the pump and the larger valves that can pass larger solids eliminate clogging.

The air cylinder, air distribution valves or regulators are above the diaphragm, so they are not flooded with slurry when the diaphragm does fail. Unlike configurations using vertical diaphragms, this feature protects the air controls and cylinder from contamination by the pumpage.

With the variable capacity of one horizontal pump, slurries can be moved at rates ranging from 1 gpm to 300 gpm at up to 100 psi without recirculation or excessive slip, a major issue with most centrifugal and positive displacement pumps. The horizontal diaphragm is protected from the abrasive characteristics of the slurry.

These pumps are reliable in the most difficult slurries. The diaphragm valve is protected in the same way from slurry because the working parts of the valve are isolated from the liquid.

C. Daniel Urquhart is an application engineer at RamParts Pump, LLC. He may be reached at 616-656-2250 or danu@andronaco.com.