Energy Efficiency for River in the Desert

I have received a lot of feedback from our readers on Part 1 of this article from the May issue of Pumps & Systems. One reader writes:

Dr. Nelik,
I read your interesting article, “River in the Desert, Fresh or Salt Water?” in the May 2018 issue of P&S magazine. I was surprised to read about plans for a major joint-venture project between Israel, Jordan, Syria and Palestine. It is good to hear that these countries (are working) together.

Assuming that the given pump flow rate and head values are close to best efficiency point (BEP) operation, a couple of different scenarios were run with the efficiency calculator.

1. Using the approximate United States customary unit equivalents to the metric values as given in the article:

2. Using U.S. customary unit equivalents to the given metric values:

In regard to the saltwater option shown in Image 1, on page 14, what is the purpose of the return tank? I may have missed a mention of this tank in the article.

Will the ~6-foot pump head be sufficient to move water to the upper end of the river in addition to overcoming friction losses through 3-kilometer (km) of suction/discharge piping? Pump and motor selections could be affected. 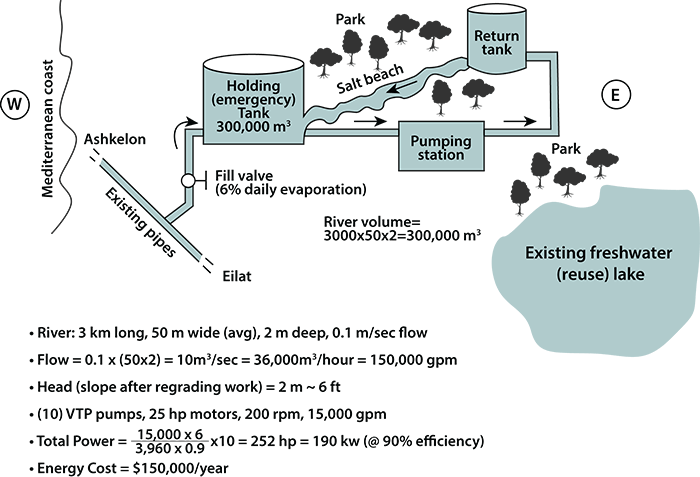 Thank you, Lee. There were several others asking the same question, so I am glad this is helpful to the U.S. engineering community.

The western part of the U.S. has similar challenges regarding water, as the desert landscape of much of that area is somewhat similar to Israel, especially southern Israel. These initiatives that started several years ago in Israel are good examples of how logistics and engineering can work together well to make dreams become a reality.

Obviously, any big idea has challenges and issues to overcome—and many people, disciplines and opinions need to be balanced and heard to find a good optimum solution. Often, modifications to the original proposals will be updated, modified and evolved into something real and tangible.

Just as you are, many others in the U.S. are not usually aware of many good and major engineering initiatives that are going on in Israel. Those include a Dead Sea project (as mentioned in the article), Lake-and-River project in Beer Sheva, Israeli water infrastructure, desalinization work to save the Kineret and many others.

After all, everybody drinks water!

We plan to construct a scaled down model of the “River in the Desert” project in our laboratory at Sami Shamoon R&D Pump Center in Beer Sheva, and would like to invite readers to continue to come up with the ideas and input, just like Lee Ruiz did. One of the things we are planning to evaluate is the efficiency and energy consumption of these pumps via theoretical calculations and live testing.

The way to further reduce the cost of energy required to “circulate the river” is to add a hydraulic turbine to recover the water energy, which should reduce overall energy cost substantially.

If that can be done, then the cost of ground removal and major excavations to reduce the total existing elevation from 70 m to just 2 m would not be as important because the energy will be mostly recovered.

The more work the pumps would do, the more energy will be available to take it “on the way back.” In the U.S., hydraulic recovery turbines became very popular in the early 1980s, and I used to design hydraulics of such turbines in those days, so I guess history comes to repeat itself!

Thank you also for correcting my initially “guessed” pumps efficiency, which you adjusted from my initial 90 percent value to about 85 percent, which makes the energy cost go slightly higher. The pumps motors would also be increased in power a little.

This is a good illustration of how the design process works—starting from a concept and undergoing several stages of adjustment and refinements.

As for friction losses in the conduit, I did not present estimated values in the original article, but a rough estimate would be as shown below: 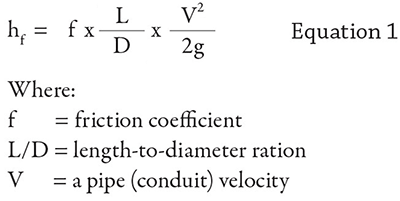 Friction loss in a pipe: The 150,000 gpm flowing through a 10-foot conduit results in approximately 4 ft/second velocity, and friction coefficient (looking up a Moody chart) is about 0.03 as a good initial estimate, resulting in hydraulic friction loss in a 3 km (about 10,000 ft) as:

Thus, the equipment adjustments would be made to the initial rough starting estimate. This is a good example of the importance of accounting for both the elevation as well as friction system curve components.

Indeed, these are the steps that the project team will be further refining, and much work is still to be done. But the process has started and there are plenty of challenges to the mechanical, civil, environmental, biological and chemical engineering, not to mention the socioeconomic aspect.

I will keep you posted on the progress. In the meantime, keep on pumping!

Dr. Nelik (aka “Dr. Pump”) is president of Pumping Machinery LLC, an Atlanta-based firm specializing in pump consulting, training, equipment troubleshooting and pump repairs. Dr. Nelik has 30 years of experience in pumps and pumping equipment and he is also a director of the International Center for Pumps Technology Research and Development in Israel, covering pumps news in the Middle East. He may be reached at pump-magazine.com. For more information, visit www.pumpingmachinery.com/pump_school/pump_school.htm.

Pumps
What's Next For Oil & Gas?
While the industry took a beating in 2020, look for new technologies to drive growth in the future.
Pumps
Rebalancing Pump Impellers
High unbalance of a rotating component such as an impeller may result in unacceptable vibration.
Pumps
How Often Should My Pressure Gauges Be Calibrated?
The frequency of instrument recalibration depends on usage and the design of the equipment.
Pumps
Smart Systems Could Prevent Weather-Related Problems & Other Catastrophes
Aging water infrastructure led to issues for Texas residents this winter.
Pumps
Centrifugal Pump Materials for Handling Products Containing Hydrogen Sulfide
Understand how standards apply to certain metals.