Dewatering projects can be short term, in the case of construction projects, or longer term, such as mining operations. When it comes to moving large volumes of water, pumps and pumping systems that can meet most pumping requirements are readily available. That said, executing by brute force is not always an option due to regulatory oversight, permitting and reporting that is becoming more prevalent in project specifications.

Interested parties do not want to see undue impact to groundwater resources. Nearby groundwater users can be impacted or perceive that they are impacted by the drawdown. Ecologists are concerned by impacts to nearby wetlands or other sensitive systems. Ground settlement can be a critical issue depending on the local geology and the amount of drawdown required.

In some cases, the excavation’s proximity to a source of groundwater recharge, such as a lake or river, requires large numbers of wells discharging at high rates to overcome the recharge.

Excavations near the ocean might have concerns related to saltwater intrusion induced by high pumping rates. In some areas, consumptive use or other withdrawal permits are required that may make it difficult to design and implement systems adequate to meet drawdown goals.

People providing dewatering services may agree that some of the stipulations and requirements in modern bid specifications are onerous and can be nearly impossible to meet. These trends highlight the benefit for industry professionals to consider groundwater exclusion techniques as a process to mitigate drawdown impacts during dewatering.

Groundwater exclusion is used regularly for complex groundwater issues, especially in projects where exclusionary methods can be incorporated as a permanent element in the final design. Methods implemented include sheet pilings, diaphragm walls, slurry walls, secant piles and ground freezing options. Secant piles are an example that makes sense for projects that require groundwater exclusion and long-term ground support. Each of these methods have their place in certain applications, and all have advantages and limitations dependent on the type of project and the desired outcome. The one thing that most of the exclusionary techniques have in common is high cost to execute.

Another method of groundwater exclusion has made substantial inroads in project execution with costs that can be reduced compared to most other methods. That method is in-situ soil mixing, generally with a soil bentonite mix or in some cases a soil bentonite/cement mix. In-situ soil mixing has proved to be effective in large-scale groundwater control projects. Examples include limiting migration of contaminated groundwater from landfill operations or other areas where the goal is to limit contaminate migration. In-situ soil mixing is basically a type of slurry wall installation that differs from traditional slurry wall installations in several ways.

Traditional slurry walls are commonly installed by excavation of a trench with either a clamshell bucket or long-stick excavator removing the native soil from the excavation. The excavation is kept open by filling it with a bentonite slurry mix that builds a filter cake on the sides of the trench, similar to the use of bentonite drilling fluids in well drilling. Slurry levels are maintained above the local groundwater level to keep the slurry-filled trench from collapsing. The excavated material is then mixed on-site with the slurry and additional bentonite or other additives.

The mix is prepared at the surface with machinery such as excavators, loaders, dozers, etc. This requires a relatively large space and may be disruptive depending on the location. The backfill mix is then pushed back into the slurry trench sequentially from the beginning to the end to eliminate voids and install a consistent backfill. This method has been used for many years and provides an effective groundwater barrier if installed properly. Permeabilities on the order of 10 centimeters per second (cm/sec) are regularly achieved. Costs can be high, and production rates may be less than desirable depending on the wall depths and project goals. 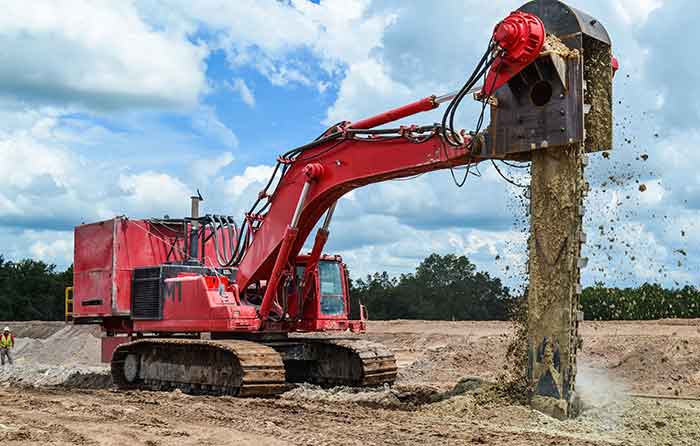 In-situ soil mixing provides a similar end-product but uses a different installation method than traditional slurry walls. In contrast to the traditional installation, the soil is not physically removed from the trench prior to mixing. In this case, a machine with a long boom fitted with a mixing chain is used to mix the soil in place with a predetermined percentage of bentonite clay. Depending on the soils, bentonite additions from 2 to 6 percent by weight are used to provide a low permeability in the finished cut-off wall.

The bentonite addition is commonly added in a pretrench of a specific size that holds the volume of bentonite required for the mix ratio. The machine traverses the trench and mixes the bentonite thoroughly with the soil. Water is added where necessary to hydrate and facilitate a good mix. The mixing process provides for a homogenous mix with fines contents analyzed within a +/- 1.5 percent range. A recent project provided hydraulic conductivities in the 10 cm/sec range with an estimated bentonite addition of 6 percent. The soil mixing zone was 16 inches wide, meaning it will be effective in cutting off groundwater flow to the area of interest.

Another option for adding the bentonite is to premix a bentonite water slurry and inject through ports on the actual mixing boom. While the mixing and injecting will provide a good soil blending scenario, the mixing tank and slurry pumping system can add complexity to the operation. Both methods of introducing bentonite are used regularly. In-situ soil mixing of the type described is typically limited to approximately 40 feet in depth. That said, installation depths are always being pushed by larger and stronger machines.

The methodology is best used in unconsolidated soils and would be of limited use in soils with particle sizes much beyond gravel. As with most other methodologies, cobble and boulder size material would be generally problematic. Hardpan layers can be accommodated depending on where they are located in the soil column and how competent they are. Mixing chains can be customized with button bits or similar teeth for tougher material. The in-situ method is effective in a layered aquifer that contains sand with silt-sand or clay-sand layers. The mixing of the natural fines and the addition of the bentonite can provide low permeability with relatively low mix percentages of bentonite. A well-organized crew can install several hundred linear feet in a shift depending on the depths and site conditions. Ground disturbance can be somewhat limited, since no large mixing zones or pits are required as they are with traditional slurry wall installation.

Once the cut-off wall is installed, the project dewatering needs are much simplified. As the cut-off wall inhibits flow toward the excavation, the dewatering system is basically sized for a groundwater storage depletion scenario. The groundwater storage can be removed rather rapidly with much reduced pumping rates and time of pumping. The reduction in dewatering rates is more palatable to other stakeholders, and it can be shown that there are no impacts from drawdown propagation beyond the worksite.

Reduced pumping rates allow for less challenging discharge options and reduced erosion control measures. It is time to look at options to minimize those impacts whether they are perceived or real. Groundwater exclusion options are effective and available. Of those options, in-situ soil mixing is one method that should be explored.

Lawrence Goss is executive director of inside sales and engineering at Mersino. He may be reached at lawrence.goss@mersino.com. For more information, visit www.mersino.com