In last month’s column (read it here), we looked at cooling water service systems with multiple hydraulic circuits used to cool equipment in industrial/process industries. These systems typically have a constant flow rate because most of the equipment being cooled is on when the facility is in operation.

Heating, ventilation and air conditioning (HVAC) cooling water systems have multiple hydraulic circuits to provide chilled water to an air handler consisting of a water-to-air heat exchanger and an actuated temperature control valve to regulate the flow rate through the chilled water circuit.

Since the flow rate through an HVAC chilled-water system varies based on the system heat load, and that heat load is affected by the time of day and the occupancy of the conditioned space, HVAC systems typically have a large range of load demands. These changing load demands, along with the large number of circuits within a typical HVAC system, create difficulty in maintaining proper system control.

A Little Bit of History

Previously, HVAC systems used a constant volume method of control (see Figure 1). The flow rate through each circuit was balanced to maintain a constant flow rate regardless of the heat load of the air handler. This was accomplished by installing balancing valves within each circuit upstream of the control valve to limit the flow rate through the circuit to the maximum flow rate. To regulate the outlet temperature of the air handler, a three-way throttle valve was used. 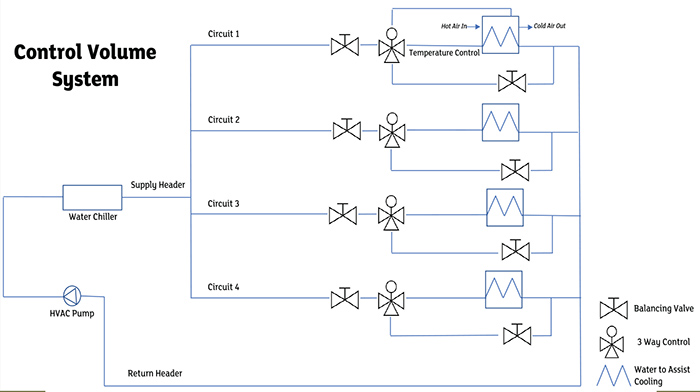 Figure 1. A simplified example of a constant-volume cooling water system in which the design flow goes to each circuit regardless of the head load (Graphic courtesy of the author)

Within the HVAC industry, unique ways were tried to optimize the system. Prior to the 1980s, constant volume systems were the standard.

With the availability of low cost variable speed drives (VSDs), many pump manufacturers offered their pumps with VSDs. The VSD allowed the speed of the pump to change by reducing the differential pressure across the control valves. This method of control worked well for industrial and process applications, but there were many problems applying VSDs to the HVAC market. The first time I saw an HVAC chilled water system with a VSD was on a constant volume system. The speed control was used specifically for system balancing.

By adjusting the speed of the VSD, the balancing contractor could easily assess the pump head to minimizing the head loss across the balancing valves. This did save some money on pumping costs, but the potential benefits of using a VSD could be much greater.

Due to the size and complexity of HVAC chilled water systems, it was difficult to arrive at a standardized method for utilizing the full potential VSDs have to offer. Every piping system is made of pump elements, process elements and control elements. It is impossible to understand how a system operates without considering how the three elements work together.

The first approach after installing a VSD on a pump was to replace the constant volume system with a variable volume system. The three-way control valves were replaced with standard two-way control valves. The standard valve would regulate the chilled water flow rate through the circuit to control the outlet air temperature of the air handler. By adjusting the pump speed with the VSD, the excessive differential pressure could be reduced across the temperature control valve, therefore achieving greater savings in energy cost.

That approach worked best on new chilled water systems, but there were problems when applying it to systems that had been added to over time, or to systems with wide variations in HVAC cooling loads. Many of the manufacturers providing controls in the HVAC space developed differential pressure control valves and pressure independent control valves to help address the problem of high differential pressure across the temperature control valves. Pump manufacturers would also suggest booster pumps to solve some of the problems associated with providing sufficient flow to all circuits.

Many of these products worked for various types of systems, but most often the addition of new equipment typically resulted in haphazard improvements.

These HVAC systems can be rather large, are often added to over time and have a wide variation in system loads. As a result, it is difficult to understand how the various elements making up the chilled water system work together.

Over time, many of the owners and operators of these commercial buildings realize that something must be done to correct the problems with their air conditioning system to keep their customers satisfied.

Many customers at engineering firms called in to ask for help on developing an accurate simulation of existing HVAC systems. Once the physical piping system model was created, they used the calculated results to simulate the system operation and discover specific problem areas. They could then work with the appropriate equipment manufacturers of the pump elements and control elements to recommend a solution.

One engineering firm in Chicago used the simulation model to identify and correct the problem in a hospital with an existing HVAC chilled water system. They could discover the problem and arrive at a recommended solution in less than a quarter of the time of their original estimate.

An engineering firm used a piping system model on a contract for improving the operation of the HVAC chilled water system for a state capitol campus. After they completed their study evaluating the various ways to improve the system, they wanted to calculate the savings in power costs.

Then they used the simulation model to help identify opportunities for system improvements. Using those results, they updated the model to show their customer the magnitude of their energy savings using the proposed improvements. After hearing what was done, I commented that this was a good approach and asked him what his question was. He mentioned that the proposed changes resulted in a savings of over 60 percent in their customers’ current operational costs and he questioned the results.

He thought the 60 percent savings was too much. After providing me with an overview of the recommended system changes, I said the projected savings in power costs appeared to be in line with their results.

He also thought the customer would not believe the estimated savings of 60 percent because it was too much. I asked him how much of a savings their customer was looking for. He said they were hoping for 20 percent. I suggested that they claim the proposed savings would be more than 20 percent. After all, 60 percent is more than 20 percent, so everyone would be happy. I then suggested that they check back after the job was complete to point out the actual savings.

Next Month
Next month, we will work through two examples of HVAC chilled water systems that were not operating effectively, discover the underlying problems were and what was done to improve the systems operation.