Although they have been around nearly as long as the oil industry itself, production additives—chemicals that help move crude through the flow stream faster—rarely receive more than a fleeting consideration. However, with cost pressures as well as health, safety and environmental (HSE) concerns on the rise, oilfield and refinery professionals are realizing the benefits of additives. This demand is driving development of “greener,” more cost-effective formulations.

Additives have contributed to every major industry milestone during the last 150 years, from the distillation of kerosene in the mid-1800s to the critical streamlining of crude movement through pipelines in Algeria, Alaska, Canada and Russia in the 70s and 80s. Many early indicators show a recognized need for additives that could help turn crude oil into usable products for profit.

The reason for this is simple: Crude is difficult to extract, transport and refine. The oil is under extreme pressure in its natural state, and it is often just one component in a hot, roiling mixture of gases, saltwater and other substances. Difficulties continue as the oil moves out of the reservoir. When crude oil cools in pipes, pipelines or tanks, its organic solvents evaporate, which causes increased viscosity that results in significant extraction and transport problems.

These factors have driven the development and evolution of production additives, or specialty chemicals. Some of these chemicals, for example, work to alter the thixotropic properties of the oil to create a lower kinematic viscosity in a process called fluidification. Others are formulated to maintain a strict hydrophilic-lipophilic balance to aid in demulsification. Chemical additives can be applied to any point in the process at which the crude’s flow slows—points often called areas of “parasitic loss.” These capabilities can enhance pump performance and reduce downtime during both the extraction and refining processes. 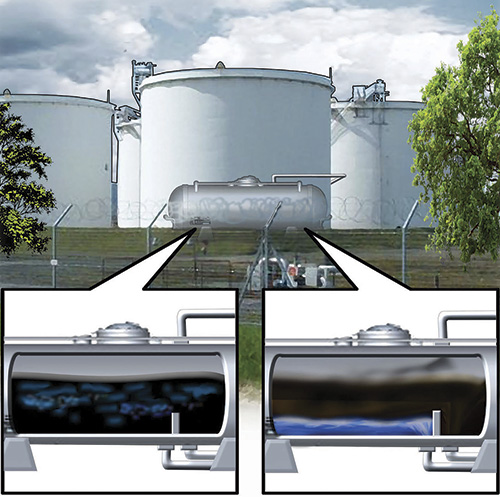 Figure 1. The image on the left illustrates how water in a flow station without production additive remains mixed with the crude, causing process slowdowns. The image on the right shows the same flow station treated with a low dosage (0.1 to 0.5 percent by volume) of an incorporative/non-evaporative demulsifying additive that reduces the emulsified water content of the crude to meet refinery standards. (Graphics courtesy of the author)

With advances in research, computer technology, chemistry and engineering, the processes for finding, producing, delivering and refining crude oil have accelerated exponentially during the last few decades. Additive technology, however, has developed more slowly.

Specialty polymers, such as Conoco’s LiquidPower (now Berkshire Hathaway’s Lubrizol), were introduced in the 1970s as drag reducing agents and were successfully employed in the Alaskan pipeline. In recent years, the organic compound known as diluted bitumen, or dilbit, has been used for the same purpose. This solvent is injected into extra heavy crude, such as the type found in the Canadian tar sands, to fluidify for midstream and downstream pipeline delivery. Despite the presence of these relative newcomers, however, hexane has remained the principal base additive used during each stage.

Hexane-based additives, however, have several drawbacks. They evaporate, requiring large quantities of solvent to offset evaporative losses. The use of naphtha also has indirect costs. Naphtha and other hexane-based solvents are derived as precipitates of the refinery stack heating process used to convert crude to petroleum. They begin as free assets, or byproducts that work well as production additives, but the process for using these assets is complicated. The solvents must be captured at the refinery, bottled and shipped safely to an end use point at an extraction well, a pipeline or a storage facility. These logistical tasks add considerable cost to the use of the solvents.

Operations that use hexane solvents also have to contend with health and safety risks. The substances are highly flammable and explosive and may pose serious health hazards, including burns and cancer.

For these reasons, naphtha and other low-cost or no-cost hexane-based solvents can actually be the most expensive components of the distillate. This condition is compounded by the high amount of these solvents often required—typically between 10 and 20 percent of the crude mix.

Despite the drawbacks of hexanes, industry professionals continue to use them. Many alternatives—built on naturally-occurring organic chemicals, condensates
like diluted bitumen and polymers—have not provided a widely accepted cost/performance balance.

In response to this shortage, chemists are using new formulation techniques to create a class of additives with anionic and nonionic properties. Manufacturers claim these chemicals will provide huge performance improvements when compared with hexane solvents and other alternatives. They also believe these chemicals will be lower-cost and effective in much lower quantities.

Broadly classified as incorporative/non-evaporative, these new additives use a generic base to transport the anionic and nonionic active agents that reduce the kinematic viscosity of the crude oil for fluidification and drag reduction. These agents use polarity transformation, which allows them to physically act between the molecules in the crude and rearrange the force of attraction to achieve better cohesion. This causes a compact mass of crude oil that has a low American Petroleum Institute (API) degree to become more fluid. It can then flow through conduits and pipelines with less turbulence and drag.

Hydrocarbons are the active agents in the additives that reduce viscosity, so they do not affect the physical properties of substances during refining. These components are recovered separately at their corresponding evaporation point in the distillated fraction at the refinery.

Since they do not evaporate, these new additives can be incorporated into the crude oil, assuming its properties while performing their intended purpose, despite changes in pressure and temperature. Unlike hexanes, these incorporative additives do not require operators to re-heat or increase pressure in the flow stream. They effectively reduce drag and turbulence, and they are used in small amounts. Required doses are 0.1 to 0.5 percent by volume treated rather than the 10 to 20 percent necessary for traditional hexane solvents like naphtha.

While the impact of these new additives may appear limited to upstream and midstream applications, manufacturers say pumps used in downstream operations also stand to benefit significantly from their use. This is primarily because a pump’s traction—its ability to efficiently move fluids such as crude oil—can be profoundly impacted by viscosity, speed, flow rate and total head, as well as temperature changes, pressure changes and the resulting implied shear forces imposing frictional losses on the entire flow stream. If some or all of these factors can be consistently and precisely controlled through the use of additives, the result could be more efficient pump service and less downtime.

The main factor affecting pump performance is viscosity, a property that has traditionally been manipulated through the application of heat. The reduction of viscosity results in a higher Reynolds number (the ratio of inertia force to viscous force), lower friction factor and, subsequently, lower pumping power requirements.

Because the negative effect of viscosity is more pronounced at lower line average temperatures, improvements in pump power and efficiency of up to 30 percent can be achieved simply by increasing temperature. Consistently applying heat at these levels on a large scale, however, can be costly and can pose challenges for pump and pipeline design. The new incorporative additives, which can be formulated to precisely alter crude viscosity without the application of heat or pressure, provide a means to chemically adjust for different line average temperatures and optimize pump power requirements. Manufacturers of the new additives say this achievement of optimum viscosity can also help reduce the frequency of pump maintenance.

In addition, many of these new additives inhibit corrosion of the pumps and pipelines by adjusting the water in the crude oil flow stream.

Incorporative production additives are relatively new in the oil and gas industry marketplace. In an industry where delays are costly and margins are often slim, new introductions can seem like a big risk.

Manufacturers of these additives are aware of the potential reluctance among end users to switch from commonly used hexanes, polymers or organic compounds, so they have supported the chemicals’ use with comprehensive testing.

One manufacturer subjected its additives to rigorous third-party evaluation before introducing them to the market. The tests confirmed that these new formulations offer a legitimate alternative to traditional additives.

For example, evaluation results for a demulsifier showed that the treatment effectively reduced the emulsified water content of crude oil from 0.40 to 0.15 percent. The 62.5 percent reduction is significant, especially since the emulsion is formed at high temperature and high pressure, creating conditions of stability that are difficult to disrupt.

Similarly, testing of the company’s fluidifier showed a notable decrease in kinematic viscosity (24.1 percent more than the initial content). A 44.4 percent reduction in water content was observed. Sulfur content decreased by 2.4 percent. Water and sediments lowered by 43.4 percent, and asphaltenes in the mass of the crude oil decreased by 10.3 percent.

As tools that help streamline the flow of crude oil, production additives have earned their place in many of the most critical processes. Their evolution has been relatively silent and slow, but new advances—most recently in the area of incorporative/non-evaporative formulations—provide industry professionals promising alternatives to the HSE risks and operational cost challenges presented by traditional solutions.

Mark Halloran is a marketing communications professional with Idea Werks, LLC. He has more than 15 years of experience writing on a variety of oilfield-related topics. Contact him at 949-701-0934, or email wmark@ideawerksstudios.com. For more information about the additive technology described in this article, visit oilfluxamericas.com, or call 713-999-4700.