The Basics of Lead-Lag Configurations

Using multiple pumps that run in sequence—also known as running a lead-lag system—is a common way to meet varying pump system demand. Cycling of the lead pump adds reliability in the form of redundancy and increases the lifespan of the system. In a traditional lead-lag system, the lead pump runs until the demand on the system is too great for the pump to meet, at which point the lag pump(s) initiates until demand is met. 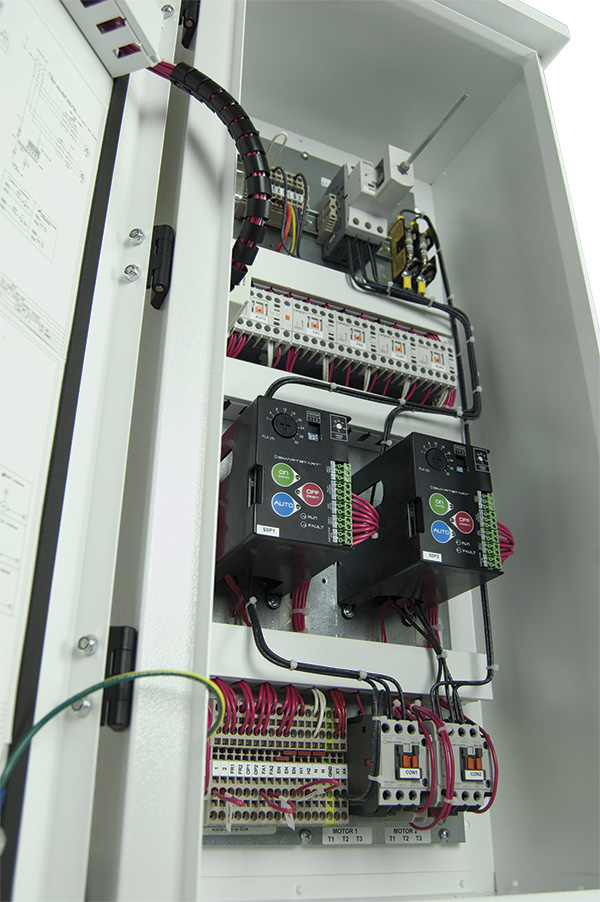 Bladder pressure tanks are fairly straightforward, consisting of a rubber bladder within a fully enclosed, air-tight metal tank. As water is pumped into the bladder, air pressure builds within the tank, exerting force on the bladder. The result of this force is a pressurized system that can provide water for extended periods of time without rapid cycling of the pumps on and off. Eventually, as the water is used and the bladder is emptied, pressure in the tank decreases and the pump starts, filling the bladder up and starting the whole cycle again.

The amount of time that the pump can stop depends on demand, and if demand is high for a long period of time, one pump may not supply enough water, even if it is running constantly. In a residential application, for example, a resident might be watering his lawn, running the dishwater, doing laundry and washing the car at the same time. In this case, using two or more pumps in a lead-lag configuration is desirable because of the wide range of possible demand. When the first pump is unable to satisfy demand, the second pump kicks on to help.

Some areas of the country pose limitations on pump size (restrictions on the number of gallons per minute a system can pump), often requiring two wells equipped with pumps that must work in tandem to meet demand.

Consider the following example. A farmer needs to irritate six fields. He has two wells outfitted with submersible pumps that feed into a pipeline providing water to six different center pivots. Each of these center pivots must run at 60 psi to properly irrigate their respective fields. During normal weather conditions, the farmer can water one or two fields at a time, pumping from one well. However, certain situations may require the farmer to run all the center pivots simultaneously.

An example of a scenario requiring simultaneous pumping is frost protection, when crops must be quickly covered with water to prevent frost damage. Running all six pivots creates too much demand for one pump to handle.

As the demand on the system increases and the top range of one pump is reached without satisfying the predesignated pressure setpoint, a need for more water that is beyond the capabilities of the lead pump initiates the lag pump. This sequence increases the farmer’s pumping capacity so he can run each of the six pivots and quickly cover all crops with water.

For an application with a large range of demand in which constant pressure must be maintained, as in the case of a lead-lag system used in a pressure tank, using one or multiple VFDs to control two or more pumps is an effective option.

This strategy requires a pressure transducer to communicate a pressure reading to the VFD so the speed can be adjusted to maintain constant pressure. The VFDs can communicate either via a programmable logic controller (PLC)-based control system or a preexisting system with which the drives are already equipped.

Because drives that are equipped with preexisting communication systems are engineered to work together and do not involve a third-party PLC, they usually require minimal wiring and communicate reliably. Some also have lead-lag functions built into their firmware.

The main reason people choose VFDs over across-the-line starters is their ability to vary speed. The ability to vary speed allows a VFD to provide constant pressure and precisely meet varying demand, which is crucial in many lead-lag applications. VFDs can provide significant energy savings, especially in higher horsepower applications. Over time, a VFD will usually pay for itself.

A VFD’s ability to ramp up—or start “soft”—is also an advantage because it prevents a large current inrush when a motor is started. In many parts of the country, utility companies limit the amount of inrush demand one application can produce. In such cases, a VFD or soft-starter is necessary to limit the inrush and meet the utility company’s mandate. With no limit, the utility company will charge more for a higher inrush demand.

Another benefit of VFDs is that many include advanced motor protection, while a starter may only provide basic protection such as a thermal overload. However, smartstarters with advanced protection and monitoring capabilities are available. Some of these starters are equipped with underload protection, power monitoring, ground fault protection and delay settings.

Some manufacturers may package two drives together in one enclosure, often referred to as a duplex lead-lag drive package. These packages are specifically designed to meet Underwriters Laboratories UL-508 requirements. The programming of the drives is one advantage of ordering a lead-lag drive package from a manufacturer. The ordering process also may allow for discussion about the applications for which the drives will be used. This enables the firmware on the drives to be preprogrammed precisely for the specific application.

In some cases, an application may call for lead-lag alternation. Alternating the lead and lag pumps can greatly increase the life of a system. Because more than one pump is doing the work, pumps will wear evenly.

Some manufacturers provide starter packages designed for lead-lag applications. This option can be less expensive than a drive package, at least in upfront costs. In lower horsepower applications (about 10 horsepower or lower depending on location and application), soft starting capabilities are not generally necessary, and the energy savings derived from VFDs diminish at lower horsepowers. For this reason, starters can be a good option in low- to moderate-horsepower lead-lag applications that do not require varying motor speeds, such as the emptying or filling of a reservoir.