A service provider operates a sludge drying facility that is located within the Stickney Water Reclamation Plant for the Metropolitan Water Reclamation District of Greater Chicago (MWRDGC) in Cicero, Ill. The facility, which processes wet sludge into dried pellets for use as an agricultural and commercial fertilizer product, represents one process of the overall plant. The drying and pelletizing occurs in a pelletizer that indirectly heats the sludge using hot oil pumped through a series of trays at more than 570 F.

The hot oil pump operates at an oil temperature of 570 F, while the motor is at ambient temperature. The coupling alignment is difficult to set and must be completed when the pump and motor are cold and again when hot because of the effects of thermal expansion. The pumps had an initial running vibration of more than 0.25 inch per second (in/sec). A 0.1 in/sec measurement would be the maximum acceptable vibration and it is recommended that vibration is less than 0.05 in/sec for a significant improvement in reliability.

Typical failures included mechanical pump seals, valves, drain plugs and flanges—which were all leaking oil. Because of the oil’s temperature, many of these failures resulted in smoke because the oil started to burn upon leaking. The high vibration and load stress resulting from the thermal-expansion-driven misalignment was causing particularly high failure rates for the No. 4 pump, the primary thermal oil supply pump. This pump had a significant number of failures and had to be rebuilt three times in 18 months according to records in the computerized maintenance management system. 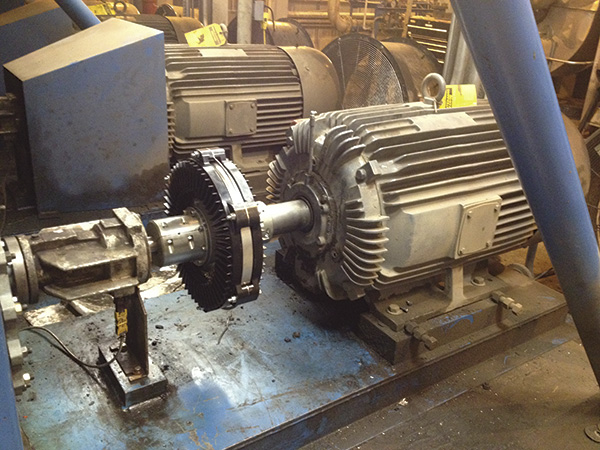 Because of the ongoing misalignment-related issues, facility management researched the latest in flexible coupling technology. Each coupling type reviewed for the hot oil pump had distinct pros and cons.

Fixed, direct and rigid style couplings suffered from the transfer of vibration and axial loading when thermal growth of the pump shaft occurred, causing perpendicular stress loading on the motor and pump axial bearings. Traditional flexible couplings (for example, elastomeric, grid or gear) provided some axial load relief but did not resolve the parallel misalignment created as the pump base and structure experienced vertical growth with increased temperature. The vertical misalignment caused torsional loads on the motor and pump bearings, in addition to loads on the coupling that caused vibration of the motor and pump.

Finally, magnetic couplings were considered. Magnetic couplings are ideal for a hot oil pump application because no physical contact between the motor and load is allowed. The magnetic air gap provides enough clearance to allow for vertical and axial changes in dimension to occur without impacting the coupling’s torque transfer, and vibration cannot be transmitted between the load and motor. The air gap also provides a thermal break that protects the motor from the extreme heat of the pump and acts as a shear pin during a load seizure, protecting shafts and connected equipment from severe damage.

However, potential limitations in magnetic technologies had to be addressed. First, axial thrust and end play on either the motor or pump could be a concern because magnetic couplings could allow too much movement in the axial direction. Second, during a load seizure, the magnetic coupling must transfer enough torque to automatically cause the motor overload circuits to trip and shut down the system to protect the magnetic coupling from damage caused by overheating. 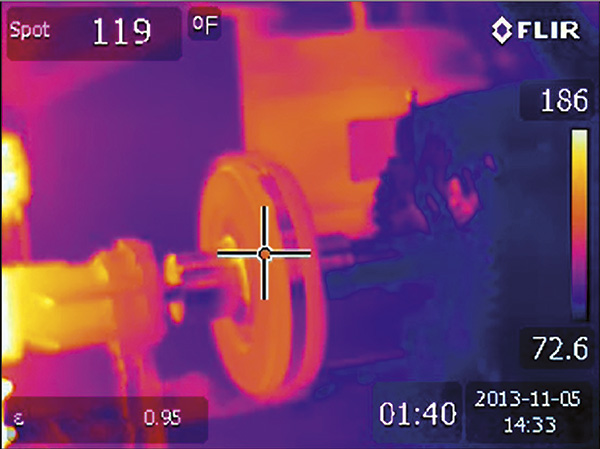 Based on a review of the available technologies, magnetic couplings provided the best combination of performance and benefits for the hot oil pump system. However, the evaluation and selection criteria for a magnetic coupling for the hot oil pump application were critical. The coupling needed to meet all performance requirements and had to fit within the existing motor and pump with minimal rework.

Because a locked rotor condition (resulting from a seized pump bearing or failed impeller) can create an overheating hazard that can damage the coupling, selecting a magnetic coupling that can transfer more than full-rated torque during locked rotor conditions was important. By doing so, the coupling will cause an increase in motor amperage inside the motor starter for a measurable time, allowing the motor’s protective circuitry to automatically disconnect power. Axial end play concerns also needed to be addressed because thrust inside the motor housing may cause axial movement in the motor rotor and shaft, particularly in rebuilt motors that may not meet original manufacturing specifications.

Ultimately, a new type magnetic coupling based on induction rotor technology was selected. This technology has the following characteristics: 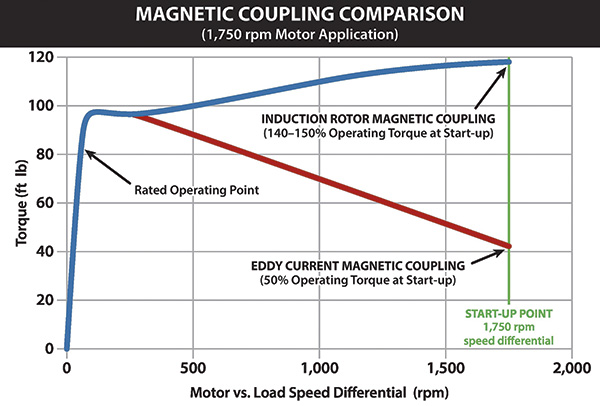 Initially, the standard air gap within the selected coupling was thought to provide adequate space to accommodate thermal growth. However, the coupling also had additional air gap spacer shims that allow the air gap to be increased for even more misalignment correction. Adding shims usually reduces the overall effective transfer of torque, leading to a decrease in pump speed.

The amount of pump speed reduction depends on the coupling’s horsepower rating, the actual load horsepower and the number of shims inserted, but it is normally less than 2 percent with the selected coupling when properly sized. For systems in which full flow is not needed or throttling valves or recirculation loops are used to reduce flow, the selected coupling offers significant energy savings. In this case, however, more than a nominal amount of pump speed/flow reduction was not desired.

Prior to the installation, a new/rebuilt rotating assembly was installed in the pump. While the rated capacity of the motor on this system is 125 horsepower, historic power readings and pump curves indicated that this pump was operating at approximately 95 horsepower at the time of installation.

The coupling was installed with the induction rotor mounted to the motor shaft, and the magnet rotor was connected to the pump shaft. The standard air gap between these coupling halves is 0.1 inch per side with no additional shims installed. However, one problem that was encountered during the installation was 0.03 inch of axial movement in the motor shaft. Given this axial movement and the known levels of additional thermal shaft growth, an additional 0.05-inch air gap spacer shim was inserted. The total available air gap was increased to 0.125 inch on each side of the magnet rotor, and this increase had a negligible impact on the pump speed. 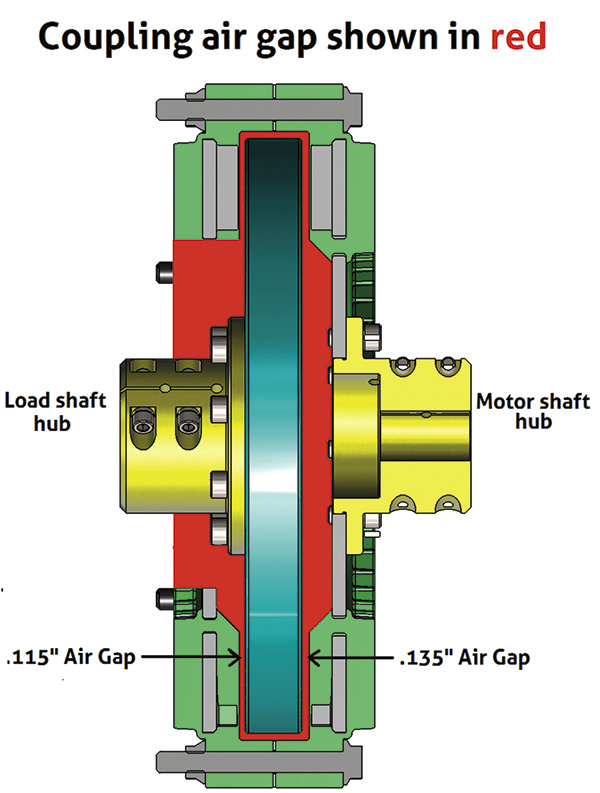 First, the installation procedures required tightening the induction rotor half of the coupling onto the motor shaft. Jacking bolts were then used to center the magnet rotor inside the induction rotor before its hub was tightened onto the pump shaft. Without end play or thermal growth, the magnet rotor would normally be perfectly centered. In this case, the magnet rotor would grow toward the motor as the pump heated. Therefore, the air gap was set with 0.115 inch on the load side and 0.135 inch on the motor side, with the expectation that it would be nearly centered after thermal growth occurred during operation. This style coupling can be off-center axially or in a parallel or angular way by the full distance of the air gap (as long as the sides do not touch) without any negative effects.

The motor was energized and the pump was allowed to reach operating temperature. Thermal, rpm and vibration data were collected to determine performance. Vibration readings initially indicated looseness in the pump. During inspection, it was determined that the pump foot was loose. After tightening the foot, vibration levels dropped to well below acceptable limits.

Another noted benefit was thermal isolation. The air gap effectively insulated the motor from the 503 F temperatures in the pump. The pump side of the coupling remained relatively cool at 119 F because of air cooling, but the motor side of the coupling was at an even lower 105 F. It is expected that reduced operating temperatures will extend grease life in the motor bearings, thus increasing motor bearing life. 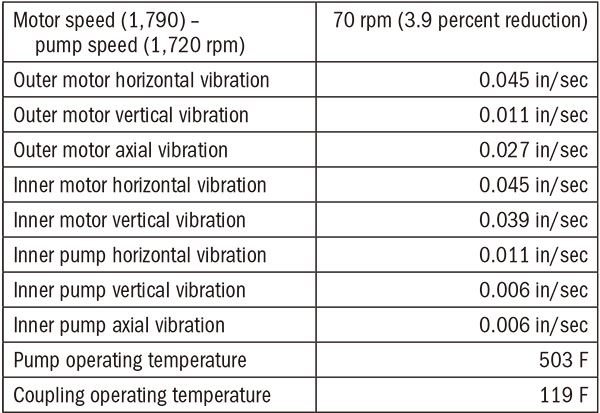 Post installation, vibration levels on the motor and pump fell to well below 0.05 in/sec in all dimensions (see Table 1). This vibration level was well within acceptable limits and far below the more than 0.25-in/sec levels recorded on three other identical hot oil pumps. The air gap also served in an insulating capacity, keeping the pump shaft heat from transferring to the motor.

The coupling’s air gap eliminated the need to perform laser alignment and can significantly reduce vibration levels that result from misalignment. The pump can grow thermally without increased vibration or a loss of torque transmission capacity. Downtime, maintenance and costly equipment repairs will be reduced during the system’s operating life. Perhaps most important, no noticeable effect was seen on the pump’s flow rate, and the overall sludge drying process was unaffected.

M. Azeem is the reliability engineer for the Veolia Chicago biosolids project at the Stickney Water Reclamation Plant in Cicero, Ill. Azeem’s focus is on improving and maintaining the reliability of this technical plant.

Marc Yarlott is an internal asset management consultant with Veolia North America with a focus on improving asset life cycles for Veolia projects across North America. He may be reached at marc.yarlott@veolia.com.

The authors would like to thank the engineers at Flux Drive for their technical support on this project.