This formula takes energy consumption at each operating point into consideration.
by Trygve Dahl
Intelliquip Inc.
01/11/2018

As global energy consumption continues to rise, greater burdens are placed on power generating infrastructure and the total cost of that energy. The pump industry reacted to these external market forces as manufacturers within the industry have innovated with new products and control systems.

For those in the pumping industry, the external forces driving change begin at the U.S. Department of Energy (DOE). The agency found that pumps in industrial applications, such as heating, ventilation and air conditioning (HVAC); municipal water; chemical process and refinery applications account for as much as 20 percent of all energy consumed in the U.S., and their results launched a worldwide regulatory movement to reduce energy use.7

Similarly, smart fiscal practices within the pump industry provided motivation to look beyond the pump to the whole pump system. As the industry began to appreciate that life cycle operating costs should be a litmus test to evaluate pumping choices, we learned that 75 percent of lifetime expenses can be attributed to maintenance and energy costs.

Thus, for regulatory and competitive reasons, the spotlight has fixed on pump or system efficiency. Efficiency, the numerical ratio between 0 and 100 percent, tells us which pump system consumes less energy at a single point. However, pumps operate at different condition points for different periods of time. How is pump efficiency measured in this case?

TWE answers this question because it represents a true measure of overall pump efficiency for a specified pump working at many different operating points. TWE offers an easy, accurate and universally recognized methodology to compare energy efficiency. With broad and consistent use, this innovative metric will provide greater transparency of energy efficiency in the industry.

Most of us understand the significance and complexity of making optimal pumping selections that meet essential functional operating requirements.1, 2, 3 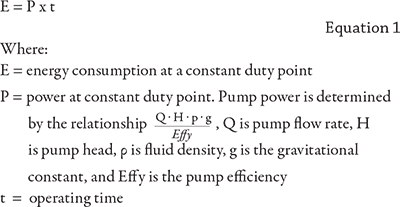 While calculating the total energy consumption over four different operating points is more exact than comparing pumps based on a single duty point efficiency, this calculation is rarely performed.
In summary, pump efficiency remains the preferred measure, but no standard method exists for calculating it across multiple operating conditions.

Recently, various efficiency metrics designed to compare pumps with multiple operating conditions have emerged. The Ecodesign requirements for water pumps, EU Regulation No 547/2012, ushered in a minimum efficiency index (MEI) that facilitates comparisons at the best efficiency flow rate and at 75 percent and 100 percent of the best efficiency point (BEP) as well. The pump energy index (PEI), which applies to constant and variable speed pumps with multiple modes of operation, came about when the DOE introduced legislation requiring specific types of pumps sold in the U.S. to meet a minimum PEI benchmark. However, neither of these metrics qualify as efficiency values, nor can they compare pumps using an actual load case and system curve.

An interesting approach known as the part load efficiency value (PLEV) was recently unveiled. The PLEV is a weighted average efficiency value inspired by the integrated part load value (IPLV), applicable to chillers and published in the Air-Conditioning, Heating and Refrigeration Institute (AHRI) Standard 550/590. The PLEV equation applied to pumps is:8

While a solid step forward, this formula only weights the pump efficiency based the proportion of operating time at each point. Since energy consumption is based on both time and power at each operating point, an improved weighting method is needed.

How TWE Is More Accurate

TWE is based on the fundamental efficiency calculation, which is the ratio of energy output versus energy input: 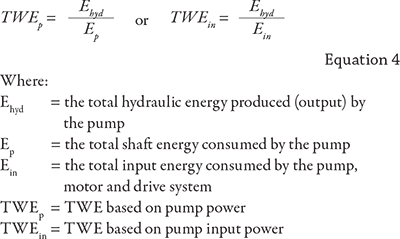 Table 1. TWE weighting factors for load cases A, B, C and D

The weighting factors in the TWE formula differ from PLEV. The W factors are affected by both time and power, and change based on the static head for each system curve.

Let’s walk through a numerical example.

Using the weighting factors for the 30 percent Hsh0, the TWEP formula is shown in Equation 6.

Pump selection software was used to analyze hundreds of hypothetical simulations across a representative product line. For comparison purposes, two different sets of pump efficiency values are tabulated, described as Pump A and Pump B. Pump A had the better TWE of 73.4 percent compared to the TWE of 71.4 percent for pump B. This is reinforced by the fact that Pump A’s energy consumption is lower at 26.44 kilowatt hours (kW-hr) compared to 27.19 kW-hr for pump B, both with 24 hours of operation. The PLEV for pump A appears less favorable at 70.4 percent compared to 71.5 percent for pump B even though pump B consumes more energy. This is due to the unrealistically high weighting factors for operating points C and D in the PLEV formula. 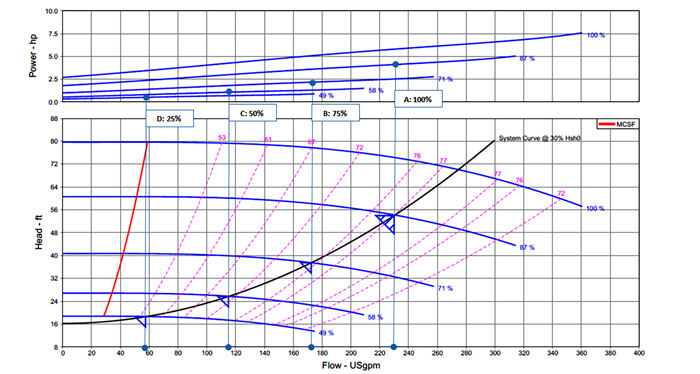 Figure 2. Pump A operating with variable speed at conditions A, B, C and D

In recent years, external and internal forces have prompted the pump industry to seek more precise methods of measuring energy use at all operating conditions throughout the day. The TWE metric here will reliably depict an efficiency value at multiple operation conditions. It surpasses weighted average methods that do not consider total energy consumption and that omit different load profiles or operating modes.

The TWE for any pump application scenario can be modeled and counted on to provide dependable comparisons between rotodynamic pumps operating at fixed or variable speed, on/off operation, throttle control or by-pass control; and positive displacement pumps.

Table 2. Tabulation of pump efficiency values for Pumps A and B

Table 3. Efficiency and energy consumption metrics for Pumps A & B 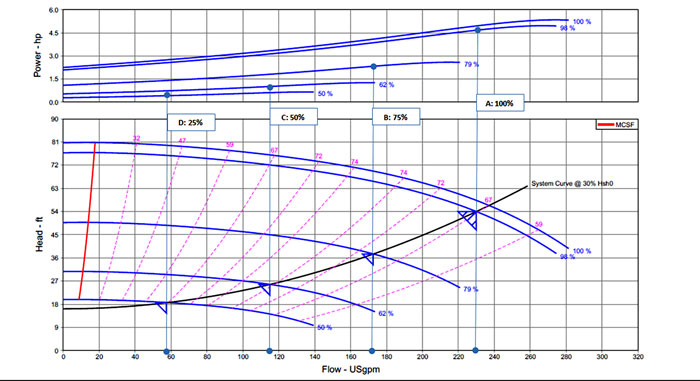 Figure 3. Pump B operating with variable speed at conditions A, B, C and D