What is the Sealing System Energy Footprint for Controlling Process or Barrier Fluid Temperature?

This is the second of a four-part Sealing Sense series that provides guidance on best practices to minimize the size of the sealing system energy footprint.

The first article discussed the energy losses from the interaction between the seal faces of a mechanical seal. Now, we will discuss the thermal energy needed to maintain a suitable temperature for the interfacial lubricating fluid in high-temperature processes.

The reliability and emission performance of any mechanical seal is dependent on the ability to maintain a stable fluid film between the faces. The three types of mating face lubrication regimes were discussed in the August 2010 Sealing Sense. For most applications, it suffices to provide a small amount of process fluid flow as flush to remove the seal face generated heat and lubricate the faces. The minimum flush flow rate is based on a 10 deg C (18 deg F) maximum allowable process fluid temperature rise.

This flush-flow rate represents a small energy loss because the process fluid used for the flush needs to be re-pumped from suction back to discharge. These systems do not rely on the cooling of the fluid, so they[EV1]  consume an insignificant amount of energy as compared with the total energy footprint of the pumping system. API Piping Plans 1,11,12,13, 14 and 31 are examples of sealing systems that use process fluid without cooling as flush. They are applicable to single seals and the process side seal of a dual unpressurized seal.

The maximum recommended operating temperature of these piping plans will depend on the process fluids' lubricating qualities at operating conditions such as seal chamber pressure and pump speed. Other considerations include the temperature limits of the secondary seals and the potential consequences of normal and transient leakage rates, or a major leak (seal failure) to the surrounding environment and the safety of personnel.

The small energy footprint for operating seals at high temperature has been recognized, but in some cases, cooling of the process fluid is needed to achieve acceptable reliability, emission and safety targets. Historical data of seal OEMs show that an annual energy savings of approximately 2.3 kW per 25 mm (1 in.) of shaft size can be realized for every 38 deg C (100 deg F) of cooling requirements[P2]  that can be removed from the seal cavity. Many high-temperature applications are found in refineries, power plants and some chemical processes. The most common sealing systems to incorporate cooling of the process fluid are API Piping Plans 21 and 23.

In these plans, an external heat exchanger reduces the process fluid temperature considerably and provides a cool flush over the seal faces. This may be needed to protect against vapor formation, meet temperature limits of secondary sealing elements, reduce coking or polymerizing of the leakage or improve the lubricating qualities of a process fluid such as hot water.

The primary benefit of Plan 21 is a sufficient pressure differential to achieve the high flow rates needed to cool the seal. The drawback is that the cooler duty is high and the flush flow needs to be re-pumped to discharge, which may result in a significant energy foot print.

Plan 23 is the default for many hot water and hydrocarbon services in power plants and refineries. The cooler duty is much lower than that for Plan 21 because it only removes the seal face generated heat and a small amount of heat soak from the process. The seal incorporates a pumping device that circulates the process fluid to the cooler and back to the seal chamber. The process fluid in the seal chamber is isolated from the hot process fluid with a throat bushing in the impeller area to minimize the heat soak loss. 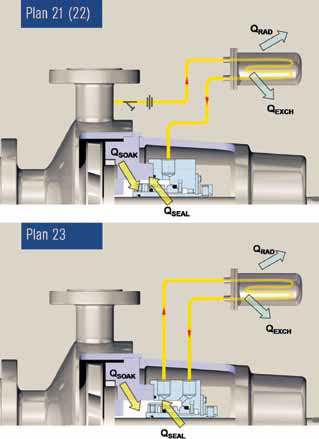 Heat soak is a source of heat flow into or out of the fluid that lubricates the seal faces. It is the result of the temperature difference between the seal chamber and the environment surrounding the seal chamber. Calculating the heat soak loss is a complex matter because of the many variables involved. Mechanical seal standard API 682 provides a simplified method for estimating this heat loss. The cooling capacities of the heat exchangers that are used in Plan 23 are 6 and 36 kW, which cover the majority of all high-temperature applications. From an energy standpoint, Plan 23 has a smaller footprint than Plan 21, but the process fluid cannot contain many solids or be too viscous, sticky or have polymerizing tendencies.

Sealing systems for dual seals require an external cooler to control the barrier fluid temperature within a specified range, with the maximum at 80 deg C (176 deg F) for many barrier fluids. The thermal loss due to heat soak may become significant for process temperatures above 150 deg C (302 deg F). The sources of energy consumption in these auxiliary systems include the pumps and motors to create the flow and pressure in the sealing system, the heat removed by cooling water through heat exchangers and additional system heat removed above and beyond the seal chamber heat load because of system design.

Each service is somewhat different and can best be estimated by your local seal manufacturer. The maximum cooling capacity of systems for dual seals is 8 kW for Plans 52 and 53A and up to 36 kW for Plans 54 and 53B. Systems for gas-lubricated seals consume an insignificant amount of energy as described in the August Sealing Sense.

This is an effective method for reducing the energy footprint of sealing systems in general. The elimination of cooling water reduces the cost to operate the seal and pump. The drawbacks of air cooling include its limited capacity and typical restriction to outdoor installations. Another method for eliminating the cooling water is to use product cooling. In this case, the process fluid is circulated through a coil in the barrier fluid reservoir or heat exchanger to remove the heat from the seal. This method is limited to process temperatures up to 50 deg C (122 deg F), and the fluid must be free of solids. The energy required to re-pump the process fluid back to discharge must be considered as the flow rates may be fairly high in this scenario.

In next month's article we will focus on the energy required to remove external fluids or diluents from a process stream.

Next Month: What is the Sealing System Energy Footprint for removing diluents from the process stream?

We invite your questions on sealing issues and will provide best efforts answers based on FSA publications. Please direct your questions to: sealingsensequestions@fluidsealing.com