What You Need to Know About Bearing Oil

A common myth in the industry is that new pumps are shipped ready to “plug and play.” Assuming their new equipment has arrived fully equipped to run, end users often start new pumps with no oil in the bearings—one of the most common pumping mistakes.

Contrary to popular belief, pump manufacturers do not put oil in the pump bearing housings before shipment. This is usually because shipping a pump with oil in the housings is illegal in most circumstances. At least three U.S. governmental entities restrict this practice, because oil—especially when being transported—falls under hazardous material regulations. Government Title 49 of the Code of Federal Regulations (CFR) contains several sections pertaining to transportation of hazardous materials. The U.S. Environmental Protection Agency, Department of Transportation and Occupational Safety and Health Administration all cite 49 CFR (various section numbers) in their regulations that prohibit shipping pumps with oil in the housings.

Manufacturers also avoid placing oil in the pump bearing housings because they typically do not know which type or brand of oil the end user will choose, and the oil can easily be spilled, leaked or contaminated during the transportation and installation processes. Most pump manufacturers publish explicit warnings about the need to add oil to the bearings both in their instruction operating manuals and on the pumps.

Despite these cautions, starting a new pump without oil in the bearings is one of the most common mistakes end users make—far more common than it was forty years ago.

To avoid expensive damage and downtime, individuals responsible for pump installation and startup must ensure that the correct type and amount of uncontaminated oil is in the bearing housings.

At the least, manufacturers recommend the type and viscosity of oil for certain ranges of operating temperature. Some may also recommend a few oil brands. When selecting an oil, one of the most important properties to look for is its viscosity grade. The correct viscosity can be determined using the correlation between the expected oil and bearing temperature and the proper viscosity required for the application. This information is typically available through a chart or table provided by the pump manufacturer or the oil supplier. In the process of oil selection you should select an International Organization for Standardization (ISO) oil number that would yield approximately 15 centistokes (cSt) when at the actual operating temperature.

The expected oil and bearing temperature can be estimated based on the process or fluid temperature, the metallurgy and geometry of the pump, and the ambient conditions. In essence, it is determined using a heat balance equation calculation: how much heat the process fluid and bearings generate (due to load) and how much heat is subsequently lost to the environment.

If present, ancillary cooling systems such as jacketed stuffing boxes (seal chambers), pedestals and bearing housings will also come into play. Other variables in the equation include the pump materials and the load on the bearings. One factor that is sometimes lost in these calculations is the oil’s role as a heat transfer medium. In most cases, completing the actual heat balance equation is not necessary because the target can be found by empirical means and alternate sources.

The most common acceptable maximum temperature limit for oil in the majority of pumps is 180 degrees F. If users choose an oil with the proper viscosity and quality, that limit can reach a suggested maximum of 200 F.

The oxidation rate of the oil changes dramatically with temperature. This rate is relatively low when the temperature is less than 140 F, but it doubles with every 18-degree increase from 86 F. This phenomenon cuts the oil life in half with every 18 degrees of increase.

As a result, most operators measure the temperature of the bearing housing to determine the corresponding pump bearing and oil temperature. The temperature must be objectively measured with an instrument such as a thermometer, surface pyrometer, thermocouple or infrared temperature sensor, not by touch or feel. I regularly receive calls from end users who report that the bearing housing feels hot to the touch. To most people, even 120 F feels hot. This is a subjective method and should be avoided. 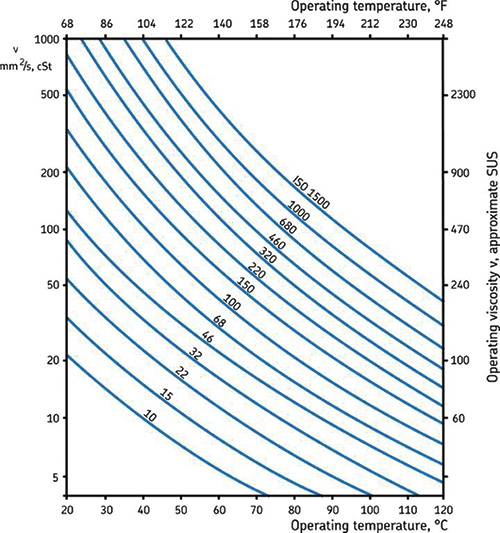 While these are general rules, bearing load, different ambient temperatures, oil type and viscosity will yield different results. Bearing life is a direct function of the oil temperature.

I strongly recommend monitoring and measuring the bearing housing temperature during initial startup. If the temperature approaches 180 F and if the rate of change is high and constantly increasing (more than one degree F per minute), be prepared to shutdown the equipment for protection and investigate possible causes.

I recommend synthetic oils to most end users because these oils are extremely consistent in their properties, are slower to oxidize and are able to maintain their viscosity properties in high-temperature applications. Synthetic oils are more expensive than mineral oils based on initial cost, so the overall cost must be evaluated.

While some natural-based mineral oils can be used in certain applications, synthetic oils are generally a better option for tougher operating conditions. Any oil oxidizes with time and temperature, but synthetic oils last longer and have a higher viscosity index, an indication of oxidation stability. Users must not confuse viscosity grade with viscosity index.

Never use automotive oils designed for internal combustion engines. The additives used in these oils will negatively affect the sump and bearing housing of centrifugal pumps, resulting in water accumulation in the bearings. Consider using a high grade of the proper viscosity turbine oil. Turbine oils are non-detergent and have the proper additives for rust and corrosion inhibition. Turbine oils are formulated to shed water and contain additives for demulsibility. As a general rule, some oils that are not turbine grade (some gear oils, for example) may work if the temperature is lower than 140 F.

An often overlooked fact is that selecting a higher viscosity grade than required will actually cause the bearing to run hotter than it would with a lower viscosity grade. A viscosity that is too low of a grade will have the same effect.

Figure 3. Expected bearing temperature range and viscosity selection. A general guideline only for typical ANSI pumps in normal service. (Courtesy of the author)

If you have any doubts or questions concerning the proper oil selection, please discuss the matter with your oil supplier and the pump manufacturer.

Do not assume that “oil is just oil” and use what is handy or cheap. The difference could mean years of service and reliability. The money you think you saved by using the wrong oil could cost you many times over in replacement bearings and shafts, labor and lost production.

Part two of this series will continue the discussion of common bearing mistakes, including contamination, oil levels, oil changes, lip seals and bearing isolators. You can read part two here.

In the short time between drafting the first Common Pumping Mistakes column (“How to Avoid Costly Damage in One Simple Step,” Pumps & Systems, February 2015) and its publication, I witnessed two more incidents of centrifugal pumps running backward. One case involved an American National Standards Institute (ANSI) pump. While the impeller remained in place for two days of operation, it then backed off, spun into the casing and damaged the pump. Incorrect direction of rotation does not always manifest in a few seconds, but I would estimate that it does 98 percent of the time.

Jim Elsey is a mechanical engineer who has focused on rotating equipment design and applications for the military and several large original equipment manufacturers for 43 years in most industrial markets around the world. Elsey is an active member of the American Society of Mechanical Engineers, the National Association of Corrosion Engineers and the American Society for Metals. He is the general manager for Summit Pump, Inc., and the principle of MaDDog Pump Consultants LLC. Elsey may be reached at jim@summitpump.com.