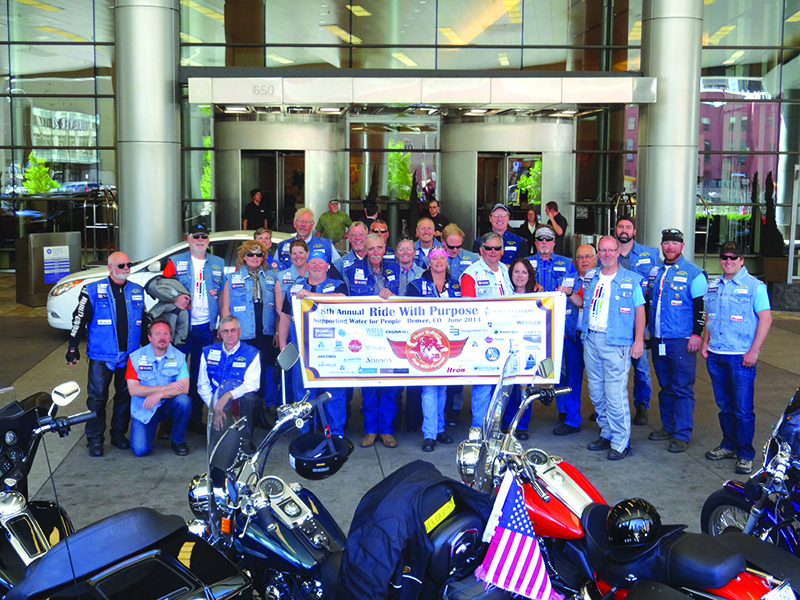 People who work in the water industry understand the importance of the gift of clean water. When you get a few water professionals together, and they happen to enjoy riding motorcycles, the result is the Water Buffaloes.

The group travels each year to the Annual Conference and Exhibition of the American Water Works Association (AWWA ACE) and Water Environment Federation (WEFTEC) shows, taking a different route each time and enjoying the countryside as they go. Along the route, new riders join those who start the journey, and before it’s done, as many as 70 bikers are riding together.

The Water Buffaloes are a volunteer group with only a fraction of costs going to administrative fees. That means that almost 100 percent of the money they raise during its Ride With Purpose goes to benefit Water For People.

“The vast majority of our membership are water professionals in production/distribution, engineering, sales and service,” Caraker says. “Our membership rides the full gamut of motorcycles, from on/off road endurance motorcycles to Harley Davidson’s. Some of us pull trailers and travel great distances to participate in the AWWA ACE show each year. And now we also have an active group participating in the WEFTEC annual conference.”

About 10 years ago, Ken Howe and Bill Persich in Seattle decided to ride their bikes to the ACE in San Francisco. Meanwhile, Harold Thomas and and Mark Stratton in Tuscon had begun riding to water operations events together and dubbed themselves the “Water Buffaloes.” The groups merged and grew, and they keep growing.

This will be the second year the group has put forth a concerted effort to have a large showing at WEFTEC in Chicago, Caraker says. “We will be soliciting a different group of riders to participate in the Dirty Water Buffaloes. This part works in both industries, and sponsors operate in either water or wastewater industries.”

Caraker said to become a full member of the group, you “must take the Buffalo oath led by our fearless leader, the Grand PooBah, followed by the ceremonial smoking of the cigar.” Members don’t seem to take themselves too seriously but are serious about raising money for their water charity.

The group is greeted with open arms everywhere they go. “We are invited to gatherings and parties during the conferences and treated like celebrities at each and every one of them,” he says. The group usually has a booth at the conference. Through the years, they have traveled all over the country, seeing such sites as the Tail of the Dragon at Deals Gap. This road along the border of the Smoky Mountains National Park is known for its 318 curves in 11 miles. “It’s one of the most famous roads for motorcycling and sports car enthusiasts in the country,” Caraker says. “This road lives up to its name with 180 switchbacks and nearly constant turns the entire 11 miles. All I can say is what a ride!”

In 2015, the Buffalo herd will snake its way around the U.S. to meet again at WEFTEC. They will again be greeted with open arms and smiles and, most important, will again contribute the money they raise to Water For People. For the Water Buffaloes, it truly is a Ride With Purpose.

Alecia Archibald is the senior editor of Pumps & Systems magazine.